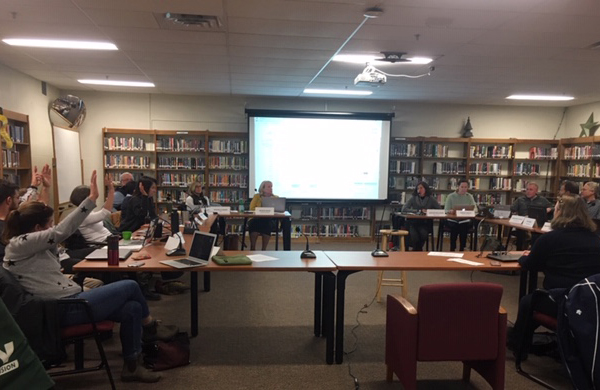 The Harwood Unified Union School District (HUUSD) Board moved forward with a preK-12 redesign plan that calls for closing Fayston Elementary School and moving all Moretown fifth- and sixth-graders to Crossett Brook Middle School. The vote was 50.20 in favor to 39.95 against. Board chair Caitlin Hollister did not vote.

At the Harwood board’s November 13 meeting, board members were split on which of the scenarios on the table would advance. Before the vote, the board heard from community members in an hourlong public comment section.

The board had to vote on the following options: keeping the status quo, where the district would operate the same seven buildings it currently does now; and option two, which has three variations of scenarios to close Fayston Elementary School and move all seventh- and eighth-graders to Crossett Brook Middle School, one of which would also move Moretown fifth- and sixth-graders to Crossett Brook.

There was an amendment made early on from Moretown representative Gabe Gilman to strike the language involving moving the Moretown’s fifth- and sixth-grade students to CBMS. The board discussed the amendment briefly before allowing the public to enter discussion.

Moretown community members were confused and disheartened to hear that Moretown students were now added to the motion. Community members wanted to know when this plan was brought up as they had not heard it before. Board members responded that this was one of the sub-variations of the scenarios that the board was to vote on. The amendment failed and the original motion was put back on the table.

Many residents spoke during the public comment session, most suggesting that the board move forward with the status quo until there were other possibilities explored. Others were eager for the board to make decisions, as this process or some portion of the process had been going on for years. Some of the residents were excited to hear that if the middle schools did merge, Duane Pierson and Tom Drake would be co-principals at CBMS. A pair of Harwood Union Middle School students spoke that they would not be in favor of moving, as they felt it would be crowded and that they had heard some faculty members might lose their jobs.

Tensions were high in the room. Board members individually delivered their personal reasoning behind their vote. Those in favor of the motion on the table wanted to bring the middle school students together sooner. Others wanted to save money and said that spending almost $10,000 more per pupil for Fayston students was unfair to the district and to other schools. Board members questioned what other students in the district could gain if they had that $10,000 applied to their yearly education like Fayston did.

Opposing board members wanted to maintain the status quo until the board could regroup and think of more creative alternatives that did not close any schools. The reasoning behind this was that the extra $70 to $100 saved on a person’s tax bill is not worth saving if a school and staff are at stake. Others thought that the board had gone the wrong way with this process; where they are considering closing schools, they should be considering methods to bring more families into the district and more child care programs.

One board member spoke out that keeping the status quo means duct taping here and there and cutting programs and faculty to try to pass a reasonable budget. The board struggles to cut the annual budget that increases every year; the board member said they were disheartened to hear the community saying the board is holding the high school ransom to get agendas passed. The representative indicated that this was an elected democracy and if people didn’t like the decision made, the district could vote them out. 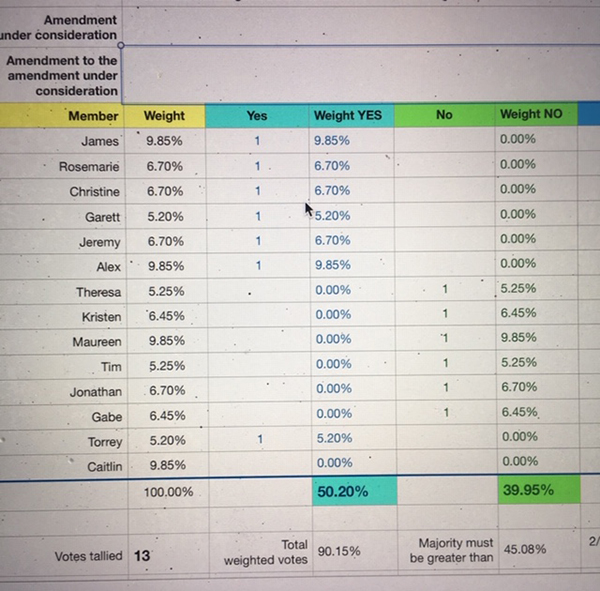 Each of the 14 board members has a weighted vote. Each town has two members to represent them on the board except Waterbury, which has four due to its higher population.

With the motion on the table, James Grace of Waterbury (9.85 percent), Rosemarie White of Warren (6.70 percent), Christine Sullivan of Waitsfield (6.70 percent), Garett MacCurtain of Duxbury (5.20 percent), Jeremy Tretiak of Waitsfield, (6.70 percent) Alex Thomsen of Waterbury (9.85 percent) and Torrey Smith of Duxbury (5.20 percent) voted in favor of continued exploration and development of a preK-12 plan that includes closing Fayston Elementary School, combining seventh- and eighth-graders at Crossett Brook Middle School and moving Moretown Elementary fifth- and sixth-graders to Crossett Brook. The total in percentages was 50.20 percent for and 39.95 percent against. Board chair Caitlin Hollister did not vote.