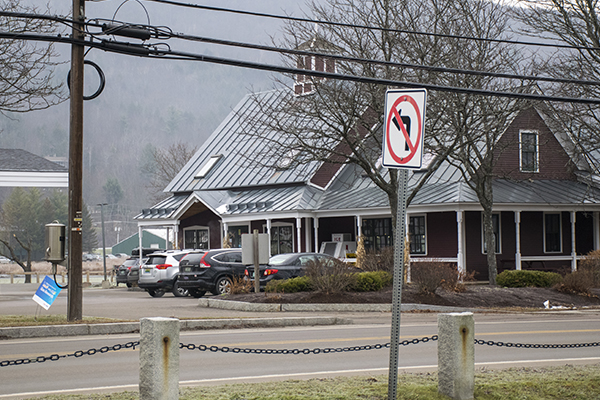 Tom Kaminski, owner of Irasville Country Store, asked the Waitsfield Select Board to support his efforts to modify the curb cut at his convenience store, gas station and deli.

“I’m here to discuss modifying my southbound-only access permit. I’d like some support from the select board in presenting an application to the state,” Kaminski told the board at its November 25 meeting.

Currently, southbound travelers on Main Street in Waitsfield can turn into the business, but northbound travelers cannot do so. That specific curb configuration was the result of a legal battle between the state, the town of Waitsfield and the Kaminskis that went to the Vermont Supreme Court.

In August 1987, the Vermont Agency of Transportation gave the Kaminskis a curb cut permit for their store, including a deceleration lane. In October 1987, the Waitsfield Zoning Board of Adjustment denied the Kaminskis a curb cut on Route 100. They appealed that decision. In March 1988 the agency revoked it for failure to comply with permit conditions and barred access.

The legal battle against the state and the town made its way to the Vermont Supreme Court with the result that there would be only southbound access from the Route 100 deceleration lane.

It remained in that configuration until Waitsfield’s sidewalk project came through in 2012, resulting in no deceleration lane and still no northbound access.

This week, Tom Kaminski provided the board with a drawing showing a reduction of 3 feet of the knob at the southbound entrance and a change in the radius of the turn to allow northbound cars to enter.

“About 95 percent of our business enters the southbound entrance and the Slow Road. But what’s been happening across time is that people who are new to The Valley are familiar with the designed access – with no left turn possible. It causes them confusion and they slow down and go past us and turn into Village Square,” he said.

Select board members asked for the history of the curb cut configuration and noted that curb cuts from state roads are exclusively the jurisdiction of the state. Town administrator Trevor Lashua pointed out that the state’s standards for curb cuts had become more stringent over time.

“The state has moved away from old models of access management. They’ve tried to reduce them. It’s been a pretty big shift in philosophy,” Lashua said.

“If they don’t want to allow that knob to be removed, I’ve lived with it for 33 years, by court order, by Supreme Court order,” Kaminski said.

Board member Sal Spinosa said he’d seen people ignoring the “No Left Turn” sign and maneuvering into the property from Route 100.

“That’s not a particularly safe turn. I’ve seen cars go up over the curb as well. My concern is the history that led to the decision in the first place,” Spinosa said.

“This is a solution that no one was happy with. You weren’t; the people who wanted your access to be 100 percent from the Slow Road weren’t happy with it. For us to give our approval without a lot of the backstory would not be a good idea,” board member Jon Jamieson said.

“But it could be worth revisiting. The town has changed. Traffic patterns have changed. The sidewalk has changed,” he added.