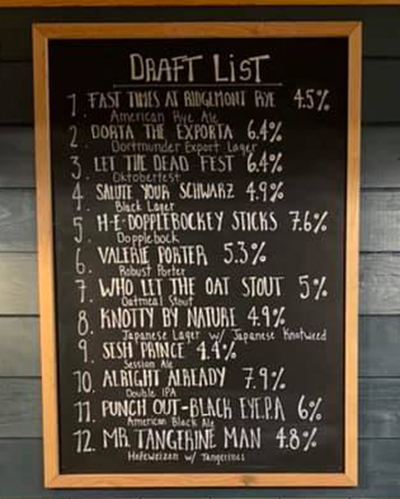 It may be almost wintertime, but breweries are springing up around The Valley. Opening day of a new taproom, Collaborative Brewing, is on Black Friday, November 29, from 2 to 7 p.m. The brewery is located off Main Street in Waitsfield in the Mad River Green Shops, around the corner from Worthy Burger Too. Grab a drink at the shiny, new, wooden bar, play some zombie pinball and enjoy some local beer at a wooden-barrel table.

Collaborative Brewing spawned this spring from a lifelong friendship and collaboration. Brett Seymour, Steve Parker and Jen Fleckenstein have known each other since they were kids growing up in Warren together. Parker and Seymour even went to the same college. Parker and Fleckenstein are siblings who own Clear Water Filtration, another local business.

The three of them have combined their unique skills into a brewing and distribution operation as well as their new taproom along with accountant Craig Isvak. “I know about brewing. Steve knows about business. All four of us have things that we’re good at, so together we make a great team,” said Seymour.

Collaborative Brewing plans to have 12 different beers on tap. The menu also includes wine and a snack menu, designed by Worthy Burger Too. “We will also let people bring food,” said Seymour. “They can go to Worthy Burger or Mad Taco and bring it in.”

Home brewing since his post-college, no-more-horrible-beer enlightenment, Seymour is an award-winning brewer. In 2015, he won the statewide Make the Cut Homebrew Challenge hosted by the Beverage Warehouse in Winooski. “I’ve always enjoyed recipe development. It’s my favorite part of brewing,” said Seymour. His selection will include a variety of subtly flavored beers, not just big, hazy IPAs.

Seymour is not concerned with the seasonal ebb and flow of potential customers that happens with ski tourism. “We hope to bring in enough locals,” he said. “Plus, beer tourism’s year-round!”