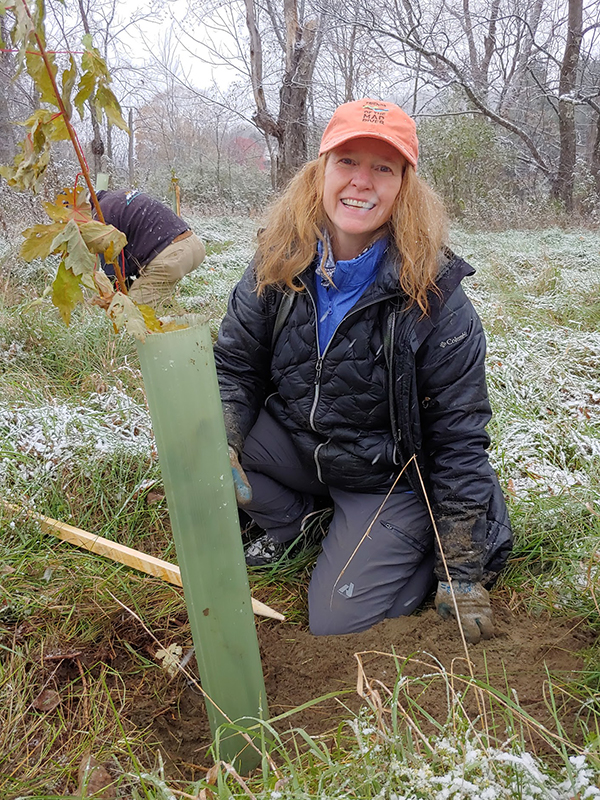 Many Vermont stories start on a ski slope and, in a way, this one did, too. Thirty years ago, local concerns about the effects of a snowmaking operation on the Mad River drew attention to the waterway’s environmental health. Capitalizing on that focus in 1990, a group of local residents galvanized a five-town watershed into what’s become three decades of research, conservation and education, under the flag of Friends of the Mad River (FMR).

FMR is a nonprofit organization that is, in the words of organization president and founder Kinny Perot, “dedicated to stewarding the Mad River Valley’s healthy land and clean water for our community and for future generations.” In 1990, with many of their Mad River Valley neighbors discussing the river’s well-being, the group spied an opportunity in the moment and seized it, said Perot via email. The goal at that point was to figure out how to improve the Mad River’s viability and then – improve it. Initially, she expected to have the whole project completed within two years.

“Wow, was I off base,” Perot says now. Improved water quality was not a goal that could be achieved quickly or in a vacuum, even in the relatively limited area of the Mad River Watershed – Duxbury, Fayston, Moretown, Waitsfield and Warren. Perot notes, “Friends [of the Mad River] has expanded its focus from water quality in the very beginning to the ecological health of the whole 144 square mile watershed and the well-being of the communities of people that occupy it.”

FMR’s expanding timeline reflected its broader goals as the group came to realize that a healthy river could only flow from a consciously managed surrounding landscape. “Often it is forgotten that the quality of the water reflects what we do on the land. So although we deeply care about the health of the river itself, the organization is deeply involved in land stewardship,” Perot said.

She adds, “If we are good watershed stewards, we can safeguard our economy, quality of life, and social fabric for the community and for future generations.”

Friends of the Mad River, now heading into its third decade, was an organization without staff at the beginning, noted Perot. Individual projects were completed by temporary hires paid through grants, while the board of directors handled the majority of ongoing tasks. Ten years after its founding, the nonprofit was able to take on staff and now employs full-time executive director Corrie Miller and two part-timers.

As the group expanded over time, new projects and initiatives were added. Miller noted that FMR’s work now includes Ridge to River, an effort to capture and slow down stormwater as it makes its way across The Valley toward the river. Stormwater rushing over the land can pick up pollutants and if unchecked, can dump them directly into waterways. Infrastructure like “check dams” can help to keep stormwater damage to a minimum, and through FMR’s Ridge to River Storm Smart program, landowners have learned what they can do to take such steps on their property. Riparian Restoration, another FMR initiative, encourages and instructs stream buffer planting and protection. Vegetation buffers along streams can help to shade waterways to cool water down and improve the habitat for fish, notes the FMR website.

Perhaps best-known of the group’s initiatives is Mad River Watch, wherein volunteers collect water samples from various points along the river’s course for water quality testing, which produces a look at conditions in well-loved swimming holes. Testing occurs throughout the summer, and results are locally reported in The Valley Reporter, per FMR’s website. The project has also produced a long-term dataset of water quality information, now spanning over three decades. A report of 30 years’ worth of Mad River water quality data was produced by Beck Pond LLC in 2016 and provided information about how water quality had changed over time and what areas might need to be addressed in the future.

Friends of the Mad River selects projects based on a combination of need and stakeholder interest, Miller says. Working with towns, landowners and other interested parties, the group has undertaken diverse initiatives over the years, including drinking water analysis (in partnership with Vermont Rural Water Association) and a geomorphic study of the Mad River and its tributaries (with the Vermont Department of Environmental Conservation River Management Program). With increasing knowledge of and concern about climate change, says Perot, the urgency of FMR’s work has only increased.

“Another recent change that has impacted our community and Friends’ work is the 2015 Water Quality Act. Since that law passed, we’ve been helping watershed towns and landowners adapt to the changing regulations,” Miller said.

“Our tourism and recreation economies in the Mad River Valley (not to mention many of the values that those of us who live here love) are built around a beautiful landscape with scenic vistas, ample opportunities to get outside and enjoy public lands, co-existing with wildlife, swimming in clean river swim holes, breathing clean air, seeing vast forestland interspersed with working farms, and so many more,” Miller added.