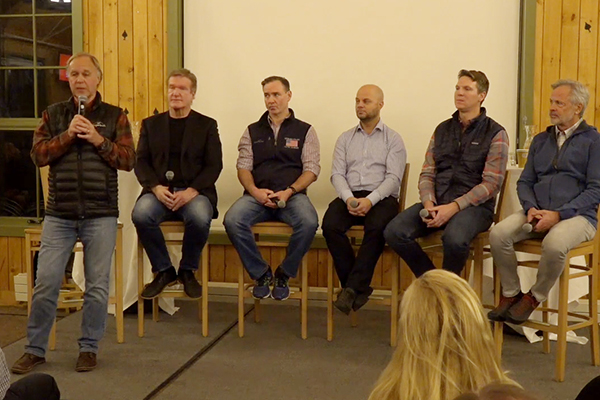 Members of the Mad River Valley community filled the Gate House Lodge at Sugarbush last Wednesday night. While there was tea, coffee, a full bar and a buffet spread of fruits and cheeses, this is not what they came for. As they entered, they settled into rows of folding chairs to hear what Win Smith, president and owner of Sugarbush Resort, and Alterra Mountain Company executives had to say about the sale of Sugarbush. The transaction will put Sugarbush in the hands of Alterra Mountain Company by the first quarter of 2020. Alterra is based in Denver and owns 14 ski resorts including Stratton Mountain in Vermont.

Smith, addressing the crowd in his casual flannel and jeans, was the first to speak at the community forum, as five Alterra executives sat behind him in equally casual attire. He wasted no time, immediately stating his three reasons for selling: competition, climate change and the cost of business. “Remaining totally independent would make the company, community and employees vulnerable,” said Smith, referring to the competition Sugarbush faces with the increasing acquisition of Vermont ski mountains by Vail. Vail owns 37 mountain resorts, three of which are in Vermont: Stowe Mountain Resort, Okemo Mountain Resort and Mount Snow. Smith admitted he was concerned that Sugarbush couldn’t keep up with the ski industry in Vermont as an independently owned mountain.

Second, Smith mentioned climate change as another reason for selling. While Smith does not believe climate change will annihilate the ski industry in his lifetime, he does believe it will have an expensive impact: “We are not going out of the ski business in my lifetime,” he said, “but we will see a different environment. We will need additional capital investments.”

The final reason for selling stated by Smith at the community forum was the cost of business in Vermont. “Doing business in Vermont is expensive. It is a disadvantage compared to other states,” he said. With his reasons stated, he moved onto two other burning questions that the public seemed eager to have answered: Why now? Why Alterra?

The time to sell is now, Smith assured the community, because Sugarbush is doing well. “You never want to sell on the downturn,” Smith said. “You want to sell when things are going right.” He even used the analogy of marriage to describe the transaction, saying that you don’t want to be forced into a marriage; that instead, you want to marry “when there’s love and when there’s strength.” With the notion of a happy marriage in the air, Smith introduced Alterra and explained why this transaction will be right for Sugarbush and the community.

Smith assured the community that Alterra would not turn Sugarbush into just another copy-and-paste resort chain. Alterra is the perfect match for The Valley, Smith said, because “their goal is to create a family of iconic destinations. They don’t want homogenized companies, but companies with their own characters.” Murmurs in the audience ensued, as those concerned about The Valley being sold out to big corporations considered Smith’s statement.

Next, the Alterra Mountain Company executives and several employees introduced themselves. Among some of the executives introducing themselves were Tim Donahue, chief financial officer; David Perry, head of sustainability; and Rusty Gregory, chief executive officer.

After Alterra introductions, community members came forward to ask questions. “How will Alterra engage the local community?” someone asked. Alterra’s answer: “We will keep doing what Sugarbush is already doing. The commitment to the community will continue.”

Another community member approached Alterra executives with concerns about climate change. To this, Perry replied, “As a company, we know how important this is. We want to reduce energy needs and get as close to a zero footprint as possible. Our platform is energy focused.”

“What are you doing to promote women leadership?” asked a young woman concerned about the representation of white male executives she saw on stage. “Not enough,” said Gregory, admitting that there are challenges to gender and diversity representation in a white male–dominated industry. However, Smith stepped in and assured the community that Sugarbush has succeeded in advancing women within their business, with 50 percent of Sugarbush’s management sector made up of female employees.

“What about the revenue model? Do sales stay at Sugarbush?” asked a woman concerned that Alterra’s multi-resort ownership might mean the loss of Sugarbush revenue to other resorts around the country. “The money will go where it’s going to make the biggest difference,” said Gregory, implying the possibility that revenue from Sugarbush might go elsewhere, as well as the possibility that revenue from other ski resorts might come here.

In addition to concerned question askers, many community members stood simply to give a warm welcome to Alterra or a big thank you to Smith. The energy in the room was positive, and the community forum ended with resounding applause for those on stage.

Smith will continue to be an employee of Sugarbush even after the transaction is complete, staying on as president and chief operating officer. Alterra Mountain Company promises to honor Sugarbush’s brand and atmosphere. For those wondering what is going to change about Sugarbush and The Valley after this transaction, both Smith and Alterra executives agree: “Not much.”