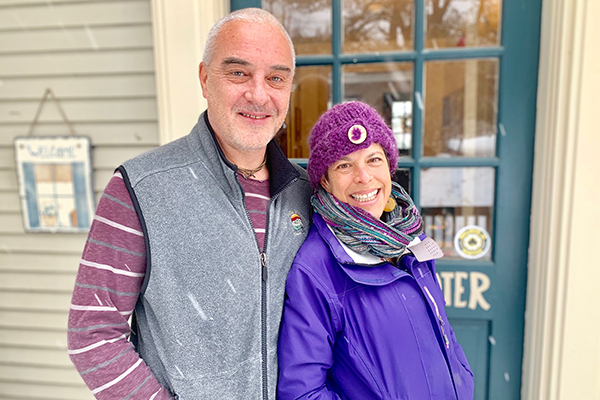 It’s called the Featherbed Inn because it’s full of featherbeds: feather-stuffed mattresses that disperse as you sink into them for a long night’s sleep. However, though the name of the Featherbed Inn has stayed the same since 1990, the management has changed. On December 3, Karen and Mick Rookwood from Arlington, Massachusetts, moved into the Featherbed Inn to start their new life and business in the Mad River Valley.

Upon my arrival, the couple offered up coffee and scones. “They’re cheddar scallion,” said Karen Rookwood, popping a savory scone onto a plate. “Would you like whole milk or low fat?” Mick Rookwood asked in a distinct British accent.

Karen grew up outside of Hartford, Connecticut, and Mick grew up in London. They met at work: an environmental consultant company. While Karen, who majored in English at Columbia, went on to become an editor and eventually a social worker after getting her master’s in social work from Simmons College, Mick stayed in the renewable energy business, where he could continue to make use of his MIT-awarded master’s in environmental technology and policy. Still, despite the success and happiness they were experiencing in Arlington, they kept dreaming of another kind of life.

Karen and Mick each had their reasons for wanting to move to Vermont and open an inn. For Mick, it had to do with work. “Mick was quite unhappy at work and tired of the corporate scene. He really didn’t want to do it anymore,” said Karen, who glanced over at Mick for confirmation.

“Right,” he replied. “I was in clean energy the whole time. Renewables, energy efficiency, electric vehicle charging, solar, all good stuff. But after 25 years of doing the same thing, sitting behind a desk … I realized that where I really wanted to be was up in the mountains. Up in the outdoors. Not living in a big city,” said Mick.

For Karen, the dream of running an inn in Vermont came from a desire to be closer to the beauty of nature. “About a year and a half ago we were visiting our niece who lives in the mountains in North Carolina, near Ashville. We spent most of the week sitting on her porch looking down the valley, watching the butterflies in the daytime and the fireflies at night, and I said to her one day: ‘I’m so envious that you get to live in such a peaceful and beautiful place.’ Then she said, ‘So Karen, why don’t you?’ It was really the first I realized, in a concrete way, that I can do that. Then we just needed to find a way to do it,” said Karen.

Why Vermont versus North Carolina?

“We’re not warm people. I mean – we love the winter!” Karen corrected herself.

“But really, we love the winter. Nothing makes me happier than to look outside and see this,” she gestured outside to the falling snow. A fresh blanket of white had already accumulated on the ground since my arrival.

“And just walking in the snow,” Karen added. “The idea that every morning, after we clean up from breakfast, we can just go for a walk in the woods makes me so happy,” she said.

While their dream started with just moving to Vermont, after some research, owning an inn seemed like the best option for them both. “At first I was looking for jobs in Vermont. Then I was looking for houses. Then, inns started popping up as well,” Mick said. He became fixated on the Featherbed Inn when he saw all that it had to offer: It was in the middle of the Mad River Valley, surrounded by three ski mountains, had a swimming hole across the road, 20 acres of private woods and 800 acres of woods beyond that, and 50 miles of mountain bike trails right off the back of the property.

“You don’t even need to leave the property for outdoor adventure!” Karen piped in.

The couple saw the Featherbed Inn for the first time last summer, when they came to visit during the Fourth of July weekend. “What a time to be here!” said Karen.

“And the inn was even more amazing then we could’ve imagined,” said Mick, picking up the end of Karen’s sentence. There are several reasons that Mick and Karen were drawn to the Featherbed Inn in particular: The building had been beautifully maintained by previous owners Tom and Linda Gardner. The grounds were expansive, including a barn and a pond. They loved that it was close to town. “We’re half a mile from Lawson’s and the Mad Taco. … I couldn’t have imagined a better location,” said Mick.

But what about the community? Mick and Karen only had one weekend to find out if the Mad River Valley community was the right for them. During their visit, they went to as many shops, inns and community events as possible, trying get a feel for The Valley residents. “We found that people had no hesitation telling us why they loved it here,” said Karen.

While doing their informal community survey, Mick found that Mad River Valley residents had two main reasons to be here and not somewhere else. “They told us why they stayed, why they came back, why they moved here. So much of it was, yes, it’s an amazing outdoor playground, but everybody also talked about the community: what a supportive place it is, how friendly everyone is. That was a huge appeal.”

Mick and Karen are not worried about leaving their city lives behind, knowing that moving to Vermont will allow them to do more of what they already love to do. “Even when we go on vacation, we don’t do cities. We do outdoors, hiking and camping,” said Mick.

Karen also thought moving to the country would allow her to do more of what she loves. “When Mick proposed that we start an inn I was a little taken aback. But then when I started to think about being able to integrate all the things that I actually love to do, being outdoors, cooking great food, hanging out with nice people. That’s what I like. And the notion that I could do those things as my work? Once the shock wore off, I realized … of course we need to do this,” said Karen.

The Rookwoods do have a few concerns about the sudden transition, however. “Making it work financially is a concern,” said Karen. “And we will have a steep learning curve in some key areas. Neither of us has run a business before.” 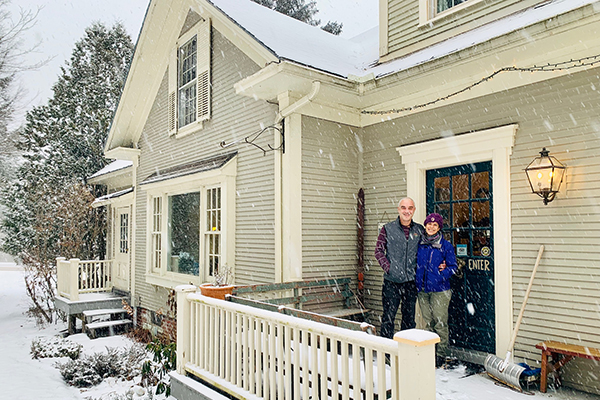 Still, they are excited to get into the swing of things, so they can finally start working on all their new plans for the inn, starting with revamping the breakfast menu. “We love to cook, and we love to cook things that are not run of the mill. So, for breakfast, we will make things like enchiladas with roasted poblano sauce. Middle Eastern tomato stew with eggs. Scones. Ricotta lemon pancakes. Oat and banana pancakes. Baked grapefruits with maple syrup.” They also have the recipe books from previous owners so they can make some classic Featherbed recipes as well.

The Rookwoods plan to add to the interior by hanging modern art and displaying pottery. They might even give the place an energy renovation. “It’s time for it to go through another round of renovations from an energy perspective,” said Mick. A professional from Efficiency Vermont has already come and done a five-hour energy audit on the place. “We’re coming up with a master plan to upgrade the whole building. I’d love to be off grid someday,” said Mick.

Other plans for the Featherbed include a variety of community-oriented events. “We’d like to renovate the barn for events. For live music. Barn dances. Jam sessions. As a warming hut for snowshoers and backcountry skiers,” said Mick.

Karen has plans for the inn as well. “I’ve been a social worker for a long time, working with sick people and grieving people. I’d like to integrate that work here. I want to organize weekends at the inn for young widows and widowers or people living with chronic illness. Just so they can be together.”

Since move-in day on December 3, the Rookwood’s have already had several guests. “How’d it go?” they were asked. Karen shot Mick a smile before she turned to me and said, happily, “We pulled it off!”