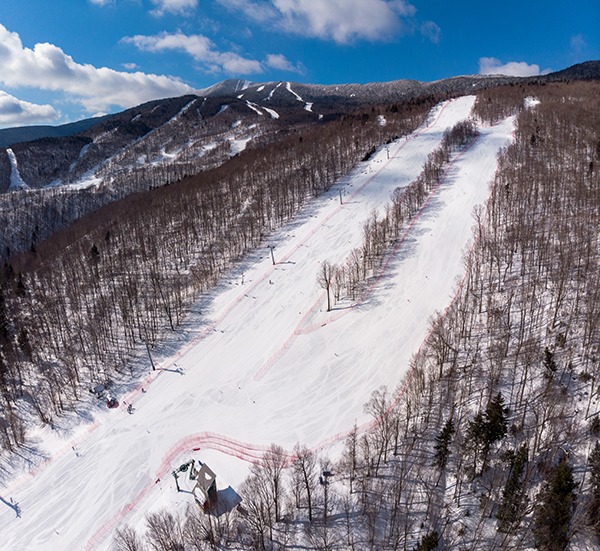 Green Mountain Valley School recently received approval from the state of Vermont to begin construction of a new, full-length T-bar on the Inverness trail at Sugarbush’s Mount Ellen, marking the beginning of the next phase in a series of transformational improvements being made to the Kelly Brush Race Arena (KBRA).

T-bar construction will begin in the spring of 2020 and GMVS is on target to spin the new lift next November. With a speed of 700 feet per minute and a total ride time of five and a half minutes, the new T-bar will enable GMVS to increase overall uphill capacity and training volume on full-length giant slalom and super-G courses. In addition, the mid-station feature will allow coaches and racers greater flexibility and the ability to use the KBRA’s expansive space and terrain in innovative and creative ways.

“Coupled with our new GS trail, nicknamed The Cut, which was unveiled last year, the new T-bar will provide GMVS with unparalleled training opportunities for all levels of ski racers, even while hosting races,” said Steve Utter, GMVS alpine program director.

“There is simply no better alpine training venue than Inverness and Brambles, especially as an environment for a constraints-led approach to learning ski skills. In addition, the speed of the new T-bar will provide our athletes all the gate training volume they need while freeing time to focus on other athletic priorities,” he said.

The T-bar is one aspect in a series of comprehensive improvements planned for the KBRA. Over the next two years, GMVS will invest $3.5 million in capital improvements to transform the KBRA. GMVS intends to improve snowmaking, install state-of-the-art timing infrastructure, renovate the ski club building and build a true spectator venue in the finish area.

“Our goal is to provide athletes with multiple variations, whereby daily training is defined by the individual athlete’s needs, not by space or time limitations,” said Tracy Keller, GMVS head of school. “We are committed to providing our athletes with world-class resources.”

The practical implications of the investment include expedited turnaround for increased volume, improved snowmaking for earlier-season training options and the capacity for GMVS to host races with a high volume of spectators. GMVS has also invested in a Racing Performance Center which was completed in 2014 and recent additions to GMVS’ staff dedicated to mental training and nutrition.

In 1982, GMVS purchased its first surface lift and installed it on the skier’s right of Inverness at Mt. Ellen. It was a milestone not only for GMVS but also for junior ski programs around the country. Since then, GMVS has made significant improvements to its training venue but none of this magnitude. GMVS and Sugarbush Resort have laid out a collaborative plan to execute these improvements, scheduled to be completed by the fall of 2021.

“As we approach our 50th anniversary and prepare GMVS for its next half century, transforming the KBRA is the obvious next step,” said Keller.