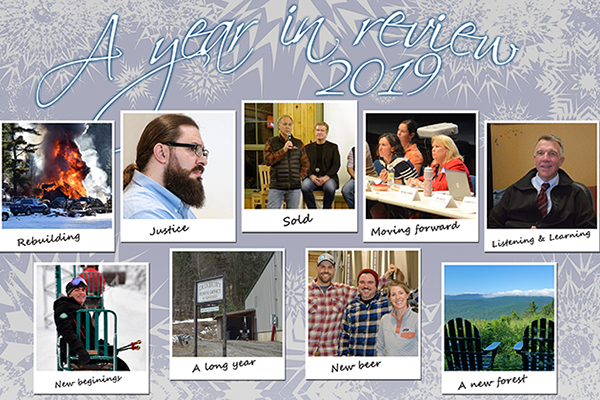 2019 has been quite a year in the Mad River Valley. In addition to the news that Sugarbush will be sold to Alterra Mountain Company, an awful lot has happened including the machinations of the Harwood Unified Union School District (HUUSD) Board, two large tracts of land to be conserved, a three-alarm fire, local option tax efforts and more. Here are some highlights.

Summit Ventures will sell the majority of its Sugarbush assets to Alterra Mountain Company, with the sale slated to close in early January 2020 subject to regulatory approvals. The news was announced in mid-November and a well-attended community forum took place on November 20 for people to meet and question a leadership team from Alterra.

Alterra currently owns 14 destinations in North America and partners with an additional 27 around the world through the Ikon Pass. 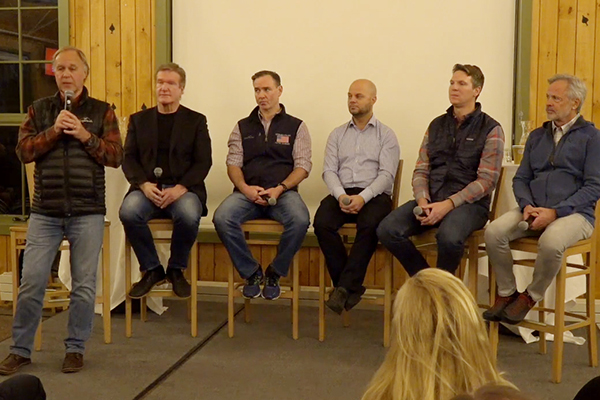 Sugarbush president and owner Win Smith said that he’d turned down several offers to sell Sugarbush over the years and took pride in being independently owned and operated. However, recent events in the ski industry and the challenge of rising costs posed both by climate change and by doing business in Vermont convinced him that a new owner was needed to ensure a sustainable future for Sugarbush. He noted that the multi-resort season pass changed the landscape making it harder for independent resorts to compete. Smith will continue as CEO at Sugarbush, as an employee rather than owner.

Smith and his family and three other investors purchased Sugarbush from the American Skiing Company with the intention of restoring Sugarbush to what it was when founded by the Gadd, Murphy and Estin families in 1958. Sugarbush Resort’s two mountains – Mt. Ellen and Lincoln Peak – are joined by a 2-mile high-speed quad. Sugarbush also has a health and recreation club, multiple lodging properties and the Sugarbush Resort Golf Club with an 18-hole Robert Trent Jones Sr. designed golf course.

Since 2001 Sugarbush has invested $74 million in mountain improvements including seven new lifts, significant upgrades to its snowmaking system and the revitalization of the Lincoln Peak base area, complete with the Clay Brook Hotel and Residences and the Gate House Lodge, two skier services buildings, the Farmhouse and Schoolhouse, and new slope-side residences.

Bourgoin sentenced to 30 years to life

Steven Bourgoin, 38, was sentenced to 30 years to life in prison after being convicted of five counts of second-degree murder for a wrong-way car crash on I-89 in October 2016 that killed five local teenagers. He was sentenced on August 26, 2019.

In May, a jury found Bourgoin guilty on all five counts for the crash that claimed the lives of Mary Harris, Moretown; Liam Hale, Fayston; Cyrus Zschau, Moretown; Eli Brookens, Waterbury; and Janie Cozzi, Fayston. Most of the teens were 16. Cozzi was 15 at the time of the crash. They were on their way home from a concert in South Burlington on the night of the October 8 crash.

In addition to the wrong-way crash that caused the deaths of the teens, Bourgoin was convicted of other charges related to his behavior after the initial crash when he stole a police cruiser and accelerated away from the crash scene on French Hill and then turned around and drove the wrong way again, back through where people pulled over due to the first crash, causing vehicle damage and injuries to others who were trying to help.

Throughout the trial, Bourgoin’s defense attorney, Robert Katims, advanced a case that Bourgoin was criminally insane at the time of the crash. Bourgoin received two separate sentences, the first for the wrong-way crash that killed the local teenagers and a second for stealing the police cruiser and driving it away, only to come back the wrong way again driving even faster than before.

It was picked by several Vermont sports writers to be the race of the day, Harwood girls versus U-32 girls. The evenly matched programs went back and forth all season. The Harwood girls managed a very close victory at the last regular cross-country season meet – the NVAC Championship at St. Johnsbury.

“One – they blasted out a lead very quickly. Even though our girls ran the second half of the race faster than U-32 girls we did not catch them. At St. J they also went out like rockets and we narrowly caught them,” coach John Kerrigan said.

“Two – our freshman girls were not familiar with the course. They were stressed as to when was the next turn, how long to the finish, etc. None of our freshman girls had run at Thetford. Enter team captain Julianne Young. Julianne suggested that the team visit the Thetford course on the Tuesday before the state championship. The girls were able to familiarize themselves with the layout of the state meet course while running a relaxed pace. It was a very wise decision by Julianne,” Kerrigan continued.

“At the state meet we knew they would start fast again. Our girls showed great discipline. Though the first mile was much faster than they were used to and were uncomfortable starting with such a fast pace, they hung on to the U-32 girls like Japanese beetles on a rosebush. In the last mile each HU girl surpassed her target U-32 runner,” he said.

It was Harwood girls’ 10th state championship in 11 years. The victory was achieved with team leadership and spirit shown by their team captain, Julianne Young, the coach said.

Placing them second overall in Vermont also rewarded their efforts. Only two-time defending Division 1 CVU girls finished ahead of them. Harwood girls qualified as a team for the New England Championships on November 9.

In addition, three members of the Harwood girls’ team – Ava Thurston, Britta Zetterstrom and Charlie Flint – qualified individually for the New England Championships by having one of the top 25 times in the entire state. With this victory, Harwood girls have now tied Harwood boys with 13 state championships each.

Harwood boys also had an individual qualifier for the New Englands. Carlton Cummiskey finished eighth in the Vermont Division 2 meet. His time of 18:00 minutes was fast enough to get him in the top 25 overall. He was followed by Vincent Spina (23), Luke Groom (28), Ebbe Lillis (33) and Zennor Di Mario (38), giving the team a fifth-place finish.