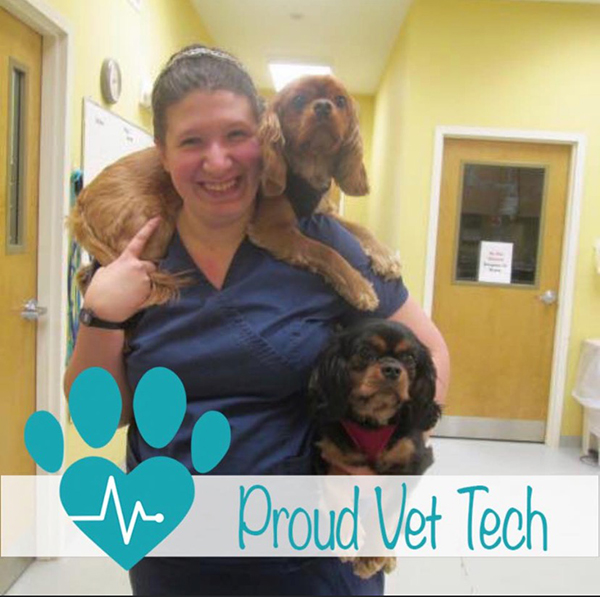 She was born and raised in Ohio. She even went to school in her home state, at the Vet Tech Institute at Bradford School. Now she lives in Vermont. But The Valley is new territory for her; she’s only been working in town for a little over a year. A weekend trip to an inn in Manchester is what first made her and her husband fall in love with Vermont and start looking for jobs here. On that weekend, the couple realized what they liked about the state. They liked the weather (it was cooler and less muggy than Ohio) and the climate (the political climate, that is).

Now, Christy Householder is a veterinary technician at Mad River Veterinary Service in Waitsfield. At work Householder sees Valley dogs every day but not always in the best light. The Valley Reporter got a chance to speak with Householder about what dog problems she encounters at the office and what dog owners can do to fix them.

Q. How many dogs do you see per day?

A. It depends on the day. Anywhere between none to eight.

Q. What are the main issues you see with dogs that come in?

A. We see a lot of dental issues. We also see skin issues. That includes ears. Unlike people who sneeze and cough with allergies, dogs end up with skin issues. You can tell that a dog has a rash because he’ll start licking it and it turns into a moist dermatitis, also known as a hot spot. We haven’t seen any recently because hot spots are seasonal. You see them in the warmer months when there’s a lot of pollen out there.

Q. Can dogs have allergic reactions to food?

A. Yes. They get their food allergies mostly from the the protein that they eat, not the grain. We’re learning a lot more that grain-free diets aren’t great for dogs. It can cause heart issues. There’s a correlation between grain-free diets and hypertrophic cardiomyopathy (HDM) in dogs. This condition is becoming a trend because there’s been a lot of marketing for grain-free diets.

Q. What is the best food for dogs, in your opinion?

Q. What is better for dogs, wet or dry food?

A. For dogs it doesn’t matter. For cats it does. Cats should get wet food in their diet because they’re not good at drinking water. So the more water they can get in their diet the better. For dogs, it’s just owner’s preference.

Q. If your dog is old and has a poor diet, should you bother switching it?

A. It’s never too late! All dogs benefit from a good diet, no matter what age.

Q. What foods should you avoid feeding your dog?

Q. CBD is getting popular now. There are even CBD dog treats that claim to reduce anxiety in dogs. Is CBD really good for dogs?

A. I can’t comment on that. CBD hasn’t been made legal by the veterinary board. We can’t say that it’s safe. We just don’t know.

Q. Do doggy dental problems come from failing to brush your dog’s teeth?

A. Yes. But, unfortunately for most owners, they just can’t brush daily. Brushing daily is the gold standard. It’s the best option. But I can’t even brush my own dog’s teeth daily! Luckily, there are other options.

Q. How can you protect your dog’s teeth without brushing?

A. There is a food called T/D from Hills, which is a great option for dogs that don’t have any other health issues like kidney disease or something like that. It’s a prescription diet. It’s actually what I feed one of my dogs. It’s a larger sized kibble. When they bite into it it doesn’t break until their tooth is completely in it, then it pulls all the tarter off the surface of their teeth. I also use a product called Perio Support Pro from Veterinary Science. It’s a product that you sprinkle on top of their food. It also helps with their teeth.

Q. What are the consequences of neglecting your dog’s dental health?

Q. Do dogs get Lyme disease?

A. Yes, absolutely. And there is a Lyme disease vaccine that is very good. We recommend it to every dog that comes in. At first, if the dog has never had it we do testing to to make sure that the dog doesn’t have Lyme. Then we give it, and they get a booster three weeks later. After that, they get it yearly.

Q. What can you do if a dog has Lyme disease?

A. It depends if their symptomatic or not. If they are we’ll treat it; if they aren’t we don’t typically treat.

Householder sees all kinds of dogs with all kinds of problems that need to be treated. She arrives a little before 8 in the morning to get ready for appointments that start at 9. But what those appointments will bring is a mystery.

“That’s the cool part about this field,” said Householder. “No day is the same.