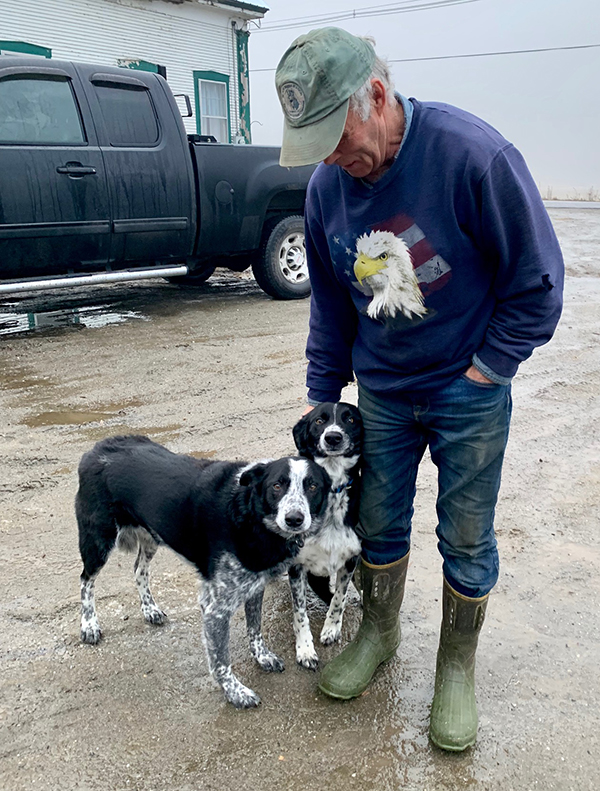 If you want to remember just how unfair the world is, imagine swapping lives with your dog. While you’re at the office getting carpal tunnel from sitting at your nonergonomic desk all day, Fido is at home sleeping on the couch, twitching as he dreams of chasing chipmunks through the woods. While you’re getting called an idiot for forgetting to pick up toilet paper from the store again, Fido is outside peeing on himself as the wind whips his urine back onto his own leg. While you might get scolded for glancing at another woman’s posterior, Fido has free reign to sniff the butts of every female dog in the neighborhood. And Fido gets it all, the food, the shelter, the love, the cuddles, the forgiveness, just for being his cute, tail-wagging self.

However, not all dogs in the Mad River Valley have it as easy as Fido. The Valley is full of working dogs toiling from dawn till dusk on tasks that no human could accomplish on his or her own. Waitsfield farmer Hadley Gaylord said it best when discussing what his working dogs do for him. “They certainly can do it a lot better than I can. I don’t want to run like they’re gonna run,” said Gaylord about his two border collies, Max and Blue, who work daily to herd Gaylord’s cattle and pigs.

Blue and Max have one job: to herd the animals on the farm. Blue, the oldest, was sent away to herding school to learn special herding techniques. “There’s a lady over in New York, above Albany, who trains border collies. When Blue was there, he was taught voice commands and hand signals. I haven’t sent Max yet,” said Gaylord. With the help of Gaylord’s commands, Blue gets the cows where they need to be and keeps them away from places they shouldn’t be. “When the cows get too close to the road I send the dogs after them,” said Gaylord.

Max is helpful too, even though he hasn’t been professionally trained yet. “He’s got the instinct. He knows he’s supposed to run after these cows and chase them. But when he gets there, he looks like a confused animal,” Gaylord said, chuckling at the thought. “Blue has more of an idea.”

There are a few key commands in Blue’s herding repertoire. “If he leaves an animal behind, I’ll holler, ‘Look back!’ and he’ll go get ’em. Or, sometimes they get to a point where the animal is stalling, not moving too fast, and I’ll say, ‘Walk up.’ Blue will walk up to the cow, inch up to it slowly, maybe try to nip its nose. Then the cows are really headed!”

Although herding animals is hard work for dogs, border collies love it. They are known for being energetic dogs that love to work. Gaylord’s dogs are a perfect example of that. “When I first get out of bed in the morning, they get excited. They stare at me. And as I start getting dressed, they start talking to me, ‘rawr rawr rawr,’ like they’re saying, ‘Let’s get going!’ It makes my heart throb,” said Gaylord.

Asked if it was hard to deal with two energetic dogs, Gaylord said no. “I’ve seen some collies that were way too high strung. But sometimes that is just a reflection of how they’ve been handled. Or because the dog has not been given the opportunity to do what they could do,” said Gaylord. “These dogs already know what they should be doing. You just have to bring it out of them. And the only way to do it is to practice time and time again.”

Local folks might catch Blue and Max running behind Hap’s Service Station, keeping the cattle away from Route 100. Meanwhile, on the other side of town, another dog is working hard at Knoll Farm in Fayston.

Rue is a 7-year-old English shepherd who lives and works with her people Helen Whybrow and Peter Forbes at Knoll Farm in Fayston. Knoll farm is a blueberry and Icelandic sheep farm that hosts retreats, concerts and other events throughout the year.

“We got her when she was a pup,” said Whybrow. “Both of her parents were working dogs.”

When looking to get Rue, Whybrow was keen on finding a breed that would suit the working dog life. “We got her specifically as a farm dog. English shepherds are not like border collies where they’re completely intent on herding. They have a lot of generalist skills, I would say. They were the all-around general farm dog for the UK for centuries,” said Whybrow, explaining why Rue’s breed is ideal for their farmstead.

Although Knoll Farm is full of sheep, Whybrow and Forbes wanted more than just a sheep dog. “We looked into getting a border collie. We felt like it might be the wrong fit for our farm because we have so many people coming here all the time and border collies are … I mean, they’re incredible, they’re so smart and sweet. … But they really need to be working all the time. They love to work,” said Whybrow. “The way that the English shepherd was described to us was as a border collie with an off switch. They can also be mellow. They’re OK to not be working all the time,” said Whybrow.

Rue ended up being the perfect all-around farm dog, one that could do both: work and chill. “She does work with the sheep, but she also kills a lot of rodents, she keeps deer and woodchucks away from the garden, she keeps coyotes out of the sheep flock. She’s on alert and on patrol a lot of the time. She stays busy checking in on her little projects,” said Whybrow.

Rue’s primary chill time is in the summer, when people come to the farmstand. “When we have the farmstand open, she loves to just sit on this porch and greet every single person that comes,” said Whybrow.

A fun fact about Rue is that she’s extremely maternal. “Every year, twice a year, she thinks she’s had a litter of puppies. It’s the craziest thing. She makes a den, then pulls all her stuffed animals into the den. She carries them around like little babies and tucks them underneath her and pretends to nurse them. She acts exactly like a mother with a litter of puppies,” said Whybrow.

For a while, Whybrow considered breeding Rue so she could have a real litter of puppies. Instead, she bought a new puppy for Rue to look after, one that could also help out around the farm.

“Machias is an Icelandic shepherd,” said Whybrow, pointing to the little caramel colored ball of fluff running in circles around Rue. “Rue takes good care of him.” Machias is the newest addition to Knoll Farm. He is learning how to be a working dog like Rue.

At the end of Common Road in Waitsfield lives another working dog. Maddie is a border collie that herds cows at von Trapp Farmstead, well-known for their award-winning organic cheese.

Before Maddie was a farm dog, she was a house pet. Her previous owners kept her inside most of the time, which caused Maddie to develop a high-strung, wound-up personality.

The von Trapps got her when she was 2 years old, after the previous owners realized she needed a different lifestyle. From the very beginning, Maddie felt the urge to herd. She had the habit of herding anything and everything. For a while, she tried to herd cars.

At first, the von Trapps had to keep Maddie on a leash when she was outside to keep her from herding cars. Eventually, the von Trapps taught her to keep her attention on the cows. Although Maddie isn’t professionally trained, she is a natural when it comes to herding.

“When she’s in the field, she just knows what to do,” said Kelly von Trapp. Maddie’s main tasks are to get the cows into the barn twice a day for milking and out of the barn twice a day when the milking is over. All you have to say is “Get ’em, girl” and Maddie sets off after the cows, nipping their heels and getting them where they need to be.

Interestingly, Maddie is camera shy. If someone pulls out a camera or an iPhone to take a picture of her, she’ll either run away or simply turn away from the camera. “Once I was 10 feet away from her on the tractor and I tried to take a picture of her. As soon as I took my phone out, she bolted in the other direction!” said Sebastian Gregg, one of the milkers on the farm. To see how cute and talented Maddie really is, stop by the farm and see her in person.