The Guild of Fine Foods runs the World Cheese Awards competition every year. This year, the guild was hosted by the annual FORME cheese festival in Bergamo, Italy, on October 18, 2019. The 260 expert cheese tasters from 35 different countries judged 3,800 cheeses in one day.

“They are regimented tasting experts,” said Ben Eldredge, cheesemaker at von Trapp Farmstead. These tasters judge cheeses based on both technical and savory characteristics. Technical aspects of a cheese may include the texture of the cheese, the rind and proportion of salt. Sensory aspects of a cheese include the general experience of smelling and tasting the cheese. 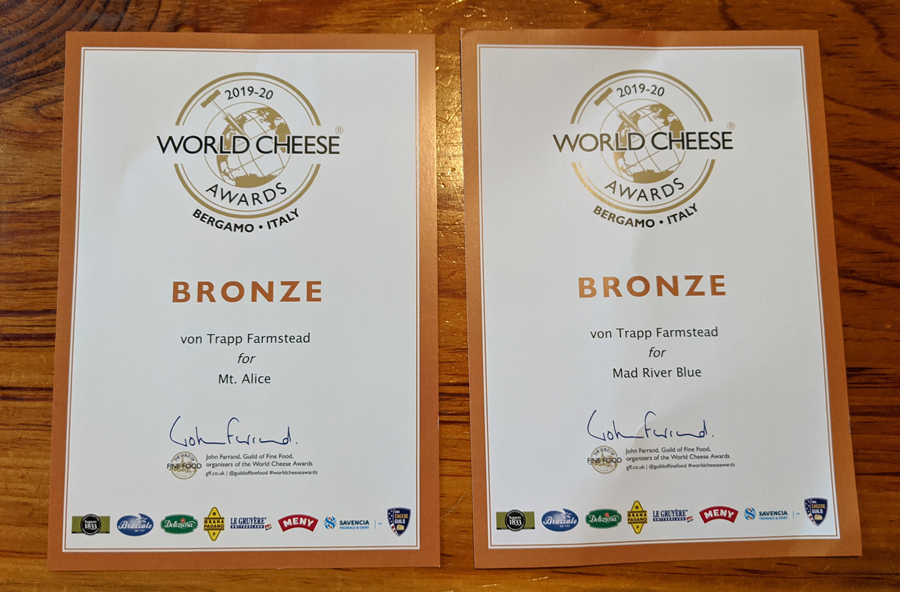 “The World Cheese Award is a gratifying award. It’s a huge stage for us. You’re competing against cheeses that have been made for hundreds of years. It takes a lot of people and a lot of hard work. And it’s great to know that it’s not just us who think our cheese is good,” said Eldredge.

Von Trapp cheese is made at the family-owned and operated cheese creamery on Common Road in Waitsfield. Unlike creameries that purchase milk from other farms, von Trapp Farmstead gets their milk from their own cows. “That’s what makes us farmstead dairy. We use all our own milk,” said Eldredge.

Making organic artisanal cheese starts with a good diet for the cows. “They are out on the pasture all day. They eat grass, hay and supplements,” said Eldredge. Another key component of making cheese is attention to detail. “It takes a lot of attention and care from everybody, through each step of the process,” said Eldridge, “We are constantly tweaking and perfecting our cheeses.”