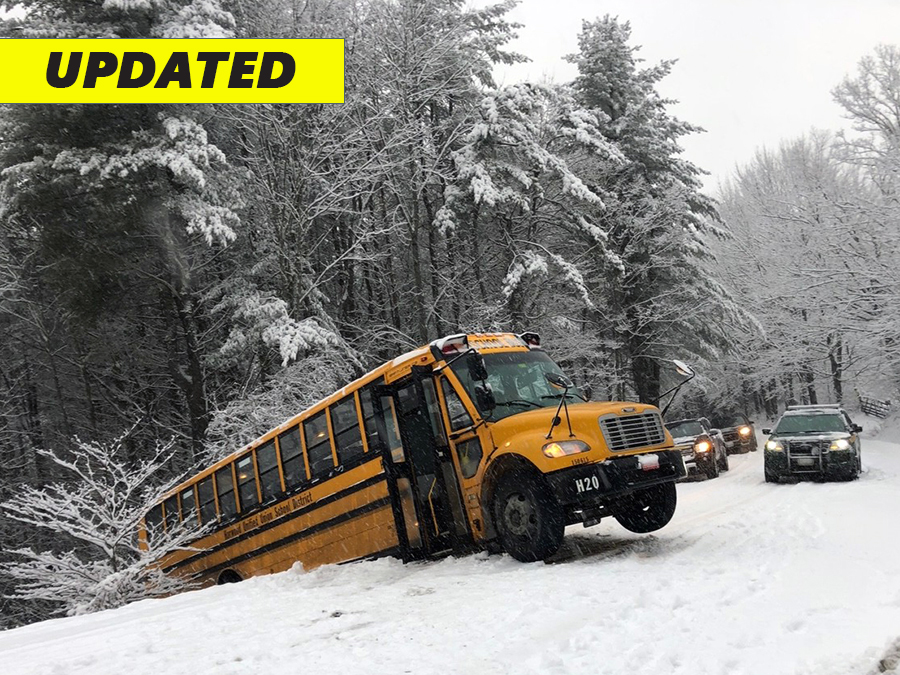 As The Valley Reporter continues its investigation of the communication breakdown regarding the school bus accident on Thursday, January 16, conflicting information of the accident has emerged. While all sources confirm that students were transported to school with no injuries after a school bus slid off Moretown Common Road on Thursday morning, the school administration and those involved in the accident have different accounts of how the situation was handled.

According to a statement issued by Superintendent Brigid Nease, “VSP [Vermont State Police] and the fire department were dispatched” and “VSP controlled access to the scene, determined students were safe but needed to be evacuated to another bus.” Later, Nease wrote that “the replacement bus was waiting at the Moretown Store and the students were safely transported by VSP in the cruiser to the waiting bus.” In a subsequent statement, Nease thanked Vermont State Police, the local fire department and the Moretown road crew for “the quick response and support.”

This statement paints a picture of distressed children being shuttled to safety by Vermont State Police with support from the Moretown Fire Department. A different story emerges, however, as three people involved in the accident speak out.

“That morning, our daughter Facetimed her father, my husband, to say that the bus was off the road,” said Danielle Savard, mother of two children who were on the bus at the time of the accident. “My husband got in his truck immediately and called his father, and said, ‘Meet me here at the Common Road. The bus is about to go down a ravine.’ They showed up at the scene, and the bus driver, Justin, was sitting in the bus. My husband said he looked terrified. The bus driver was on the radio with the bus barn. The bus barn was saying, ‘Do not evacuate the children until we get another bus.’”

In Savard’s account of the accident, it was not the state police who evacuated the bus but her husband, Zack Mostov, along with his father, Neal Mostov, who happens to be a volunteer firefighter. “My husband asked the bus driver to hand him the radio, and he said, ‘On behalf of every child on this bus and their parents, I am making the decision to evacuate these kids now.’ He and his father systematically evacuated the children, which they have been trained to do having volunteer firefighter experience. They took all the kids off the bus. Then, the police officer showed up. My husband told him to radio in some help and bring some cruisers. The cop went back into the car, while Zack and his father shuttled the kids to their new bus. There was one neighbor who offered to let the kids wait in her house. They weren’t shuttled by cop cruisers to school. Nobody was on scene other than one cop, who wasn’t equipped to deal with the situation.”

The Valley Reporter spoke to the cop on the scene, Sergeant Andrew Campagne, to confirm what had happened that morning. “I didn’t transport anybody. The bus driver, a firefighter and a parent coordinated getting the kids to a safe location where they had another bus. I had nothing to do with that,” said Campagne. When The Valley Reporter asked Campagne who else showed up to help the children, he said, “It was a Moretown volunteer fireman and one parent, and there was a lady who let the kids stay warm at her house while they waited.”  Campagne said it was these four people (the bus driver, the parent, the firefighter and the neighbor) who coordinated the evacuation and transportation of the children. “They did everything. I was just doing all the stuff that I needed to do for my investigation,” said Campagne. Savard’s and Campagne’s accounts of the bus incident overlap on one key element: It was not the police who coordinated the transportation of the children but a parent and a firefighter.

The Valley Reporter called Neal Mostov, one of the people responsible for evacuating the children and shuttling them to safety, firefighter and grandfather of two children on the bus. Mostov said he went to the scene after getting a call for help from his son. Here is Neal Mostov’s account of the evacuation: “When I got there, the first thing I did was to check that everyone was OK. When I told the bus driver to evacuate, he said no. He was talking to his dispatch, who was telling him not to take the students off the bus. My son started talking directly to the people on the dispatch. … I guess that would be the bus barn. We decided not to wait for their decision and evacuate the bus. The bus driver was totally in agreement. Then we started to evacuate the bus from the rear to the front.”

Mostov described the logistics of transporting the children after the evacuation. “The kids went across the street into a driveway of a lady who lives there. We waited for the bus driver to figure out how to get another bus there. When we figured that out, we started transporting the kids to the bus. There was one other parent that showed up there and helped transport a few kids,” said Mostov. The Valley Reporter asked Mostov if police were at the scene. “Yes. The police got there pretty quickly, right after we made the decision to evacuate the bus.”

Despite this triple-layer account of the accident, there are still many questions to be answered. Why wasn’t the school board informed about the severity of the incident? How does the town notify the bus barn about road conditions? At a Moretown Select Board meeting on Tuesday night, January 21, several people spoke during public comment, urging the select board to update the communication procedure between the town garage and the school, so that an accident like this doesn’t happen again.

The Valley Reporter contacted Martin Cameron at the Moretown town garage to find out exactly how the town road crew informs schools about road conditions. “In the eight years I’ve been doing this, I’ve never called the bus barn. I’ve always waited for them to call me; then I weigh in with my opinions about the roads,” said Cameron.

Cameron was on plow duty the morning of the accident. During his morning route, which starts at 4 a.m., he stopped to call the bus barn, warning them that the roads were bad. “This particular morning, I did not hear from them,” said Cameron, referring to the morning of January 16. “When I hadn’t heard from them, I was afraid they were going to try to keep school open. So, I get to the top of Moretown Mountain Road and give them a call. I called Jessica Jarvis at 5:01 in the morning. She relayed my information to the bus barn, which was the fact that the roads were extremely slippery. I did not tell them to close school. I just called to let them know that they should consider it, because the roads were bad,” said Cameron.

Cameron explained how this situation made the timing ripe for an accident. “Our plow routes are approximately four hours long. We have three routes with tandem trucks, so it takes each one of the drivers, myself included, around four hours to do one continuous route. We’re not going to get back to a spot that we’ve done for almost four hours. So that’s part of the issue leading up to this,” said Cameron.

The bus barn, First Student, and Nease could not be reached for comment.