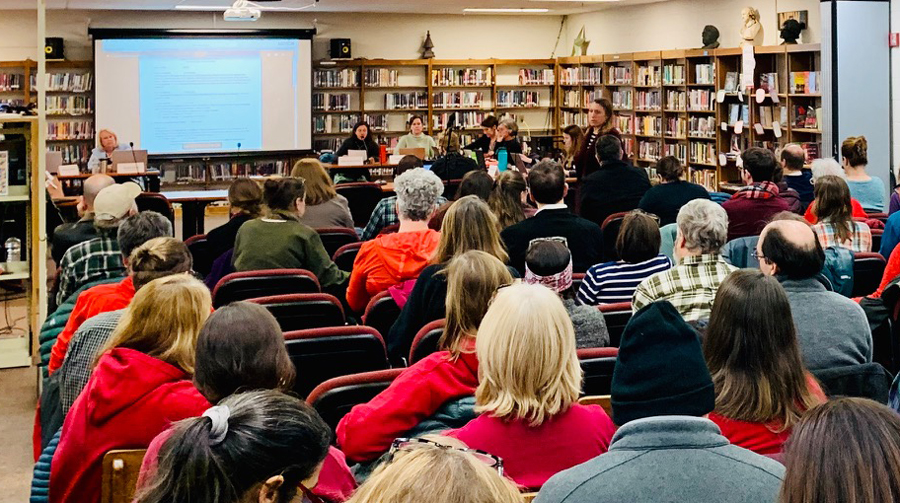 The public wants a say in what happens to students in their district, hence the creation of petitions that seek to amend the 2016 Articles of Agreement by which voters in the six-town school district voted to merge in the Harwood Unified Union School District (HUUSD).

The petitions were created and submitted by the Vermont Coalition for Community Schools (VTCCS). The petitions received nearly 800 verified signatures in less than three days. VTCCS is seeking two specific changes to the Articles of Agreement, a document that acts as the school district’s constitution.

First, the VTCCS wants the public to have more say in school closures. Currently, the school board has sole authority over school closures, after 2021, which is why the board could move forward with a redesign plan to close Fayston Elementary School after June 30, 2021, despite disagreement from many Fayston residents. If this petitioned amendment was passed, however, the change would not permit the closing of a school without a simple majority vote by the electorate in the town where the school is located. According to the petition, “Closure of school includes wholly or partially repurposing a school building from classroom instruction to another use.”

At the HUUSD Board meeting on the evening of January 22, the school board rejected both petitioned changes to the Articles of Agreement. Thus, the petition will not be warned for Australian ballot voting on Town Meeting Day. Here one might be tempted to ask, is that even legal? Can the board just reject a petition like that? Nicole Mace, the attorney speaking on behalf of the school board, said yes; in this case, the board is not legally required to accept the petition.

According to Mace, the board is not required to accept the petition because both proposed amended articles contain subject matter that is outside the general electorate’s jurisdiction. “A board has discretion to refuse to include a petitioned article at a Town Meeting vote if the subject matter of the article concerns a matter outside of the voters’ authority,” said Mace. “The Vermont Legislature has provided school boards the authority to ‘determine the educational policies of the district, have possession, care, control and management of the property of the school district, relocate or discontinue use of a building, or take any action that is required for the sound administration of the school district.’ Those are all separate powers given to the school board through 16 VSA 563.” In other words, the school board has full control over all policy-related changes regarding the education of students, including closing schools and moving students.

“The attorney says that the board would not be required to adopt the petitions. But this is democracy. It’s OK for the people to be heard. While I disagree with the opinion, even assuming it’s right, you should adopt the petitions because it’s good to have people be heard.” Before taking his seat, Shems warned the board that Moretown is taking a hard look at withdrawing from the district.

Several board members attempted to peek behind the veil of legal jargon before this issue.

“Our voters had to approve us to become a merged district together. They did so with these articles. It makes sense to me that the voters should be able to take powers away if they don’t like what we’re doing. I’m not understanding why the voters have the ability to dictate and approve articles but can’t make edits to the articles after. It just doesn’t make logical sense to me,” said board member Maureen McCracken, Waterbury.

To this question, McCracken received a mouthful of legal jargon. “Provision 706 M of title 16 states that when establishing a district, the electorate has exclusive authority to amend articles. However, any provision of the final report that was not set forth as a distinct subsection under Article 1 of the warning must be amended by the board,” said Mace. In other words, while the electorate has the power to create articles, it does not have the power to change them once they are in place.

While McCracken focused on the articles, board member Rosemarie White, Warren, wanted to know about the petition itself. “Was the petition illegal or invalid?” asked White. Mace responded, saying that the petition was neither illegal nor invalid but simply is not in the electorate’s power to choose.

“The petition calls for an action by the electorate that is not within their authority to decide,” said Mace. She noted that the board is allowed to accept this petition and warn it at Town Meeting but advised against it. “My opinion is that, particularly in the context of school configuration, accepting this petition would constitute a significant erosion of the school board’s authority in the district. I would caution you against doing that,” said Mace, making it clear to the board that adopting this petition would reduce the board’s decision-making power over the district.

Before the final vote, board vice chair Torrey Smith, Duxbury, warned board members of the danger of referendum governing. “When I sit at this table to make policies with my fellow board members, I know that they have swathed through every column of every spreadsheet. I know that they heard comments from everyone who came. I know that they have read all the letters in their inbox. I don’t feel that that same standard is held with voters all the time. … I don’t think this petition is a good petition. I think it overreaches. I will not be supporting warning this petition for Town Meeting,” said Smith.