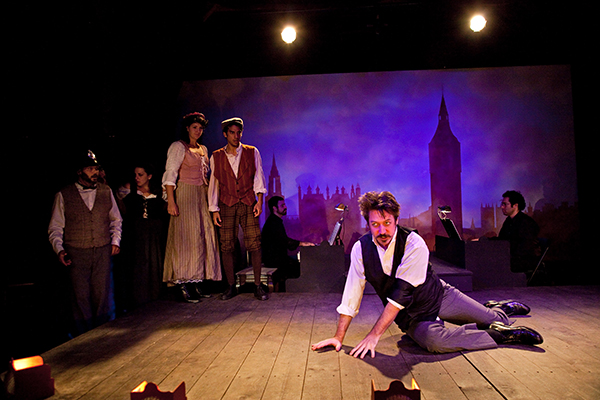 An 1891 dairy barn in need of major renovations; a dream of hosting summer theater in a quintessentially Vermont setting; limited funds but unlimited determination for a major undertaking; these were the ingredients the new owner brought to the former Stafford farm on Common Road in Waitsfield in 1988.

At the time, the new owner, Peter Boynton, was still based in NYC, enjoying an acting career that would include roles in three daytime soap operas, numerous regional theater and national tour productions, off- and on-Broadway productions, and the occasional horror movie role.

Boynton was born in Maine where his father’s family members were sheep and potato farmers. His entrepreneurial instincts were influenced by his love of old farm structures, his need to swing a hammer and his vision of what the Stafford barn could become. So began a 10-year project to restore and repurpose the barn.

In 1996, after a two-year run in the Broadway revival of the musical “She Loves Me,” Boynton moved to Vermont full time. The renovation project had started in earnest in 1990 with attention to the structural repairs of the post-and-beam barn. Local post-and-beam guru Frank Brown and his crew did the heavy lifting on this part of the project, and the renovation design plans were rendered by architect Bob Burley and his staff.  The late Jack Simko, Waitsfield, the owner and driving force behind the Inn at Round Barn Farm renovations, offered encouraging words and mentored Boynton with invaluable insights gained from his own barn project. Countless neighbors and friends lent a helping hand throughout this period, with special support from neighbors Mike and Lynne Kingsbury. Lynne Kingsbury, a member of the Stafford family, was raised in the 1820 farmhouse on the property, and the Stafford family had run the dairy operation at the barn for many decades.

In 2001, newly named The Skinner Barn, the site was ready to host social, educational and cultural events. Originally built in 1891 by the Daniel Skinner family, it was only fitting that the Skinner name was chosen to honor the original builders. That first season featured four cabaret evenings of Broadway show tunes and a public contra dance. The 2002 season continued the cabaret evening series and public dances and added a musical theater camp for young actors. By 2003, all these offerings became annual events and the first full Broadway musical production, “The Robber Bridegroom,” was added.

Twenty years since that first season, The Skinner Barn Theater will present the musical “Annie Get Your Gun” this July and August. The production team and cast will include a mix of Broadway professionals and talented local theater artists – a model that has served Boynton well over the years. The cast will feature a host of Skinner Barn Theater alumni and will star Broadway veteran Elisa Van Duyne as Annie Oakley. She was introduced to Skinner audiences in last summer’s production of “Better By Two.”

For tickets and more information about this season’s events, go to theskinnerbarn.com or call artistic director Peter Boynton at 802-496-4422.