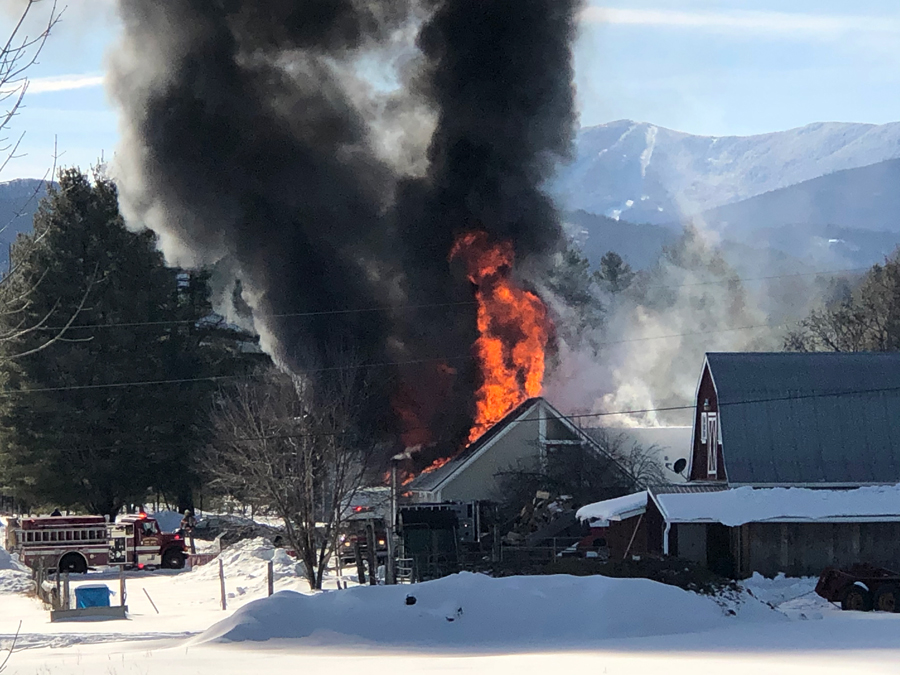 On Saturday afternoon, February 15, the Wintersteiger US New England office burned to the ground. A passerby called the Waitsfield-Fayston Fire Department at 12:50 p.m., reporting that clouds of smoke were billowing through the eaves of the building. The Waitsfield-Fayston Fire department responded immediately and called Moretown and Warren Fire Departments for mutual aid.

The Waitsfield Wintersteiger office, or Grindrite as some employees call it, was a machine warehouse. In the Wintersteiger building in Waitsfield, workers designed, built, marketed, sold and serviced machinery related to skiing and snowboarding. Stan Woliner, principal at the Waitsfield Wintersteiger office, said he was proud of the innovative in-line machine designs made there, designs that were both space efficient and wide enough to grind both skis and boards. Today, Woliner and colleagues are planning next steps, as the building that has kept the same employees together for 25 years and the equipment inside is gone.

“When I arrived on scene, smoke was coming out of the back part of the building, out of the eaves. We started fire operations and within three to four minutes there were flames coming through the roof. We set up a defensive attack to protect the building that was close by,” said Tripp Johnson, chief of the Waitsfield-Fayston Fire Department.

The fire was so advanced that when the firefighters arrived they called the Waterbury Fire Department for more assistance. Ultimately, it took five trucks and 30 firefighters to stop the fire. They used a defensive attack, meaning there were no interior operations.

Although firefighters were lucky that the horseshoe driveway before the building allowed for dual access points, according to Johnson, there were more challenges than conveniences involved in extinguishing this fire.

“In the beginning, one of the biggest challenges was having manpower there quick and early. Another battle we were fighting was the wind. The wind kept blowing the fire into area we were trying to save,” said Johnson.

Ultimately, firefighters were able to save the garage and the house next door. “That’s something that we’re proud of, considering how advanced the fire was when we got notified,” said Johnson.

No one knows how the fire started; by the time firefighters arrived, the fire was too advanced to determine a source. The working assumption is that the fire started accidentally.