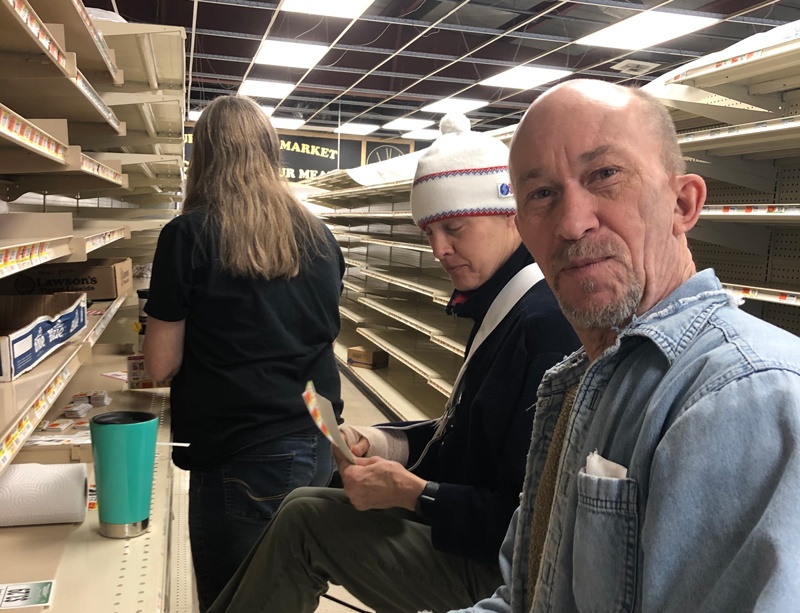 Restocking at Mehuron’s begins this week in anticipation of a March 7 reopening. The Waitsfield grocery store has been closed since January 5 along with three other nearby businesses due to fire damage.

The fans in the store’s produce coolers were damaged by the soot, ash and smoke of the fire, which started in Infinite Sports and was quickly extinguished by local firefighters.

“In addition to the ash damage to the fans, those coolers were over 20 years old and we decided it was time to replace them anyway,” Mehuron said.

“Plus we just didn’t want to take a chance because of the ash and soot,” Hyde said.

So, the store will reopen with some creative use of ice to keep the produce cool until the new produce coolers arrive later in March.

Store employees and brand representatives will undertake restocking the store which was emptied almost completely after the fire. Nonperishable items will be first with dairy, produce, meat, fish and deli items later. Until the store reopens, access to the Vermont liquor store remains at the back of the store.

The fire burned a lot of ski boots which released a particularly bad combination of chemicals which caused the smoke and soot damage to Shades of Winter Yarn Shop, Infinite Sports, Kinney Drugs and Mehuron’s.

At Mehuron’s a firewall already existed between the grocery store and the adjacent Kinney Drugs, but the ash and soot spread deep into the store. In the aftermath, Mehuron and Hyde spray-foamed the firewall to add protection. As part of the cleanup, all the ceiling tiles had to be replaced and the partners also upgraded all the lighting to LED which will save money and energy. Additionally, Mehuron’s has partnered with a solar power company, Aegis, Waitsfield, and going forward the store will be using 100 percent solar power for its electrical needs.

Next door at Kinney Drugs, Servpro employees were removing boxes and filing cabinets from the store which had been stripped to the walls. Duane Phelps from Servpro said that it remains to be seen how much work has to happen in that space. Like Mehuron’s the drug store ceiling tiles and everything in the store were contaminated.

Infinite Sports remains dark with the door boarded up. Business owner Seth Thomas said he is continuing to work his way through the insurance process with another major meeting coming up on February 28. He is not allowed into his building yet. Servpro employees were seen working in Shades of Winter Yarn Shop last week.