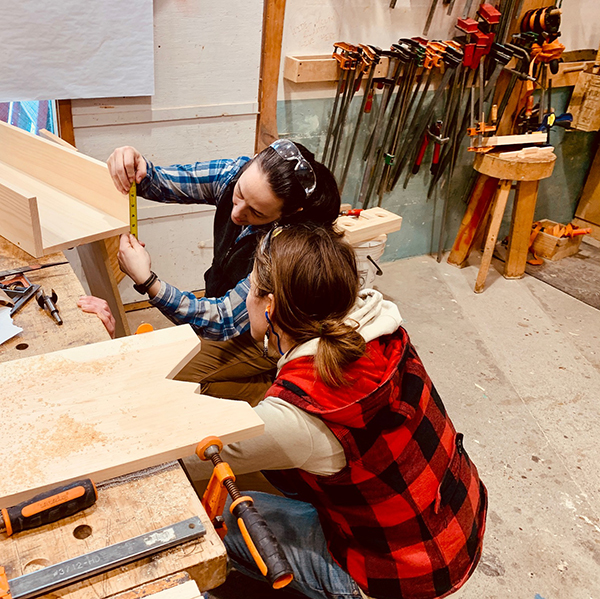 Yestermorrow Design/Build School in Waitsfield offers an incredible variety of courses. For all these courses, Yestermorrow offers a Standby for Locals program in which locals get 50 percent off tuition if there are still spaces available near the start of the course. However, one class at Yestermorrow is so popular that it rarely has a standby list, often requiring a waiting list instead. The class, a two-day, all-day workshop, is called Powertools for Women.

Around the room women wearing safety glasses and sawdust-covered sweaters were putting the finishing touches on their freshly built Shaker-style benches. “This class is always full. It always has a waitlist, because there’s a high demand for it,” said Brainard over the hum of a drill press in the background.

Brainard explained why the Powertools for Women class is so popular. “The class attracts women who want to get into the trades, and specifically into woodworking. Many women find it a struggle to get into, especially in the work world. This venue teaches basics of woodworking and gets you started in an environment that’s supportive to women,” said Brainard.

Yestermorrow also teaches a coed version of the course but has seen great interest in the women-only version. There’s been a lot of interest and success in it as just a women’s course because it cuts out all the potential issues that come with men being more socialized around tools already knowing how to use a drill. With this course, there’s a lot less judgment and stress around those sorts of differences,” said Brainard.

The Powertools for Women class isn’t just for women who want to get into trades as a profession. It’s also for those who want to be self-sufficient. “A lot of women say, ‘I want to learn to repair stuff in my own home. I’m not actually looking to become a furniture maker or getting into this as a career, but I want to know how to use tools effectively so I can do something on my own. I don’t have to always ask somebody or hire somebody,’” said Brainard, noting the desire for self-sufficiency as a strong factor in motivating women to take the class. “We get quite a range of ages, which I love.”

There are several reasons that the Shaker-style bench was chosen as the main project for this class. First, it’s a project that’s achievable in two days. Second, the techniques involved in making benches can be easily translated into other projects. Finally, the process of building benches exposes students to a variety of tools and machinery. However, Brainard emphasized that one does not need to have a full playroom of woodshop tools to complete a project like this at home. “We try to give people enough information and background that they can go home and even without a full woodshop set up and produce the same product or another project using similar techniques. So, the idea really is to build self-sufficiency beyond needing us here as instructors explaining exactly what to do.”

Furniture making is Brainard’s specialty. Before she went to work as a full-time furniture maker, Brainard honed her woodworking skills as a student at Yestermorrow. “I actually got my start here; then I went off into the work world. I was a furniture maker at a company for a long time. Now I predominantly teach. I love teaching and empowering people at this level to try something that seems out of their reach and showing them it’s totally achievable.”

However, Brainard admitted she initially had trouble breaking into this male-dominated field. “I had a couple false starts in furniture making,” said Brainard. “That’s really what drove me to come to Yestermorrow as a student. I had tried a couple times just to get into woodworking and carpentry as a trade, and every time I did, the guys on the job site would kind of funnel me into office work. I was like, no, I didn’t come here to sit at a computer.” After a few false starts, Brainard enrolled at Yestermorrow as a student to gain some more experience in furniture making. “I wanted the experience so I could walk into a job site and not just get funneled into those sorts of roles,” she said.

With these false starts in mind, Brainard and her colleague, Lizbeth Moniz, also teach those in their Powertools for Women class another kind of skill: How to hold your ground in a lumberyard. “Lizbeth and I have been in this world long enough that we know how to tell women, ‘Know what you need for your project and hold your ground because inevitably, even at the level of interacting with people in a hardware store or a lumber yard, they’ll try to tell you what you need.’” Brainard seemed ambivalent about discussing these gender issues with the press. “It’s tricky. I’ve had some great experiences working with men in this field. But it’s not always easy,” she said.

Brainard explained that women being interested in the trades is not a new phenomenon. “Women have been interested in this longer than it’s been accessible. We get a lot of women in these classes from older generations saying, ‘I wanted to take shop in high school, but I wasn’t allowed to take shop. I had to take home economics.’ They’ve wanted to do this for years, and now’s their chance because society has opened in a way. It’s not as closed off as it used to be.”

Putting Brainard even more on the spot, The Valley Reporter asked Brainard if she noticed a difference in the way novice men and women approach woodworking. “This isn’t true for everyone. … I don’t want to gender stereotype here,” she started. “But there is a difference.” According to Brainard, women take a slower approach, listen more, think more thoroughly through the process. “They also tend to produce a more exact product,” she said. “And men are like, ‘Yep, yep, yep, yep. Go!’ Half the time they’ll be cutting something before you get into the instructions. It’s not to say that all men are like that,” Brainard emphasized. “And you can certainly get that with women as well.”

At the end of the day, co-ed or not, Brainard wants her students to come out of the classroom with one thing: the confidence and ability to continue doing projects outside the classroom. “For anybody who leaves here and wants to be able to continue doing this, I want them to be able to do it,” she said. “I want them to walk out of here knowing how to design a project, select the materials for it, and build it with the tools they have,” she said. “Not everybody is going to have a table saw. They might just have a chop saw and a drill, but you can build a lot with just a chop saw and a drill. You can build quite a bit with that!”