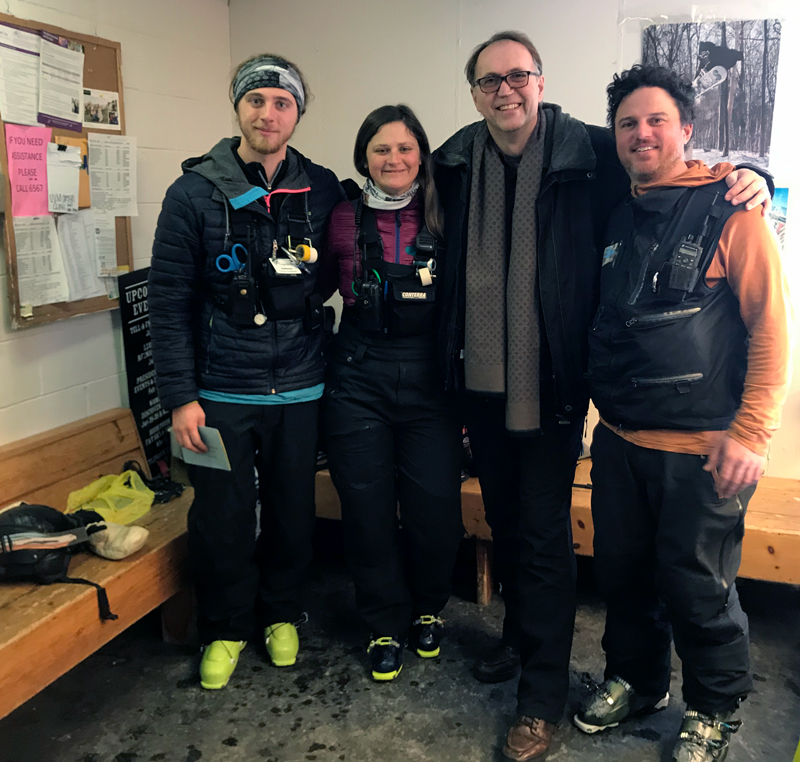 Speedy intervention and a new type of CPR plus on-the-ball ski patrollers are credited with saving the life of a 57-year-old Massachusetts man who went into cardiac arrest while skiing at Sugarbush last month.

The skier (identified only by his first name to protect his privacy), Martin, was skiing at Mount Ellen with his girlfriend and had just recovered from a cold that required antibiotics.

“We’d been skiing green and blue trails and I tried a black diamond. I felt like it was more exhausting than normal. I thought I was not in such great shape after my cold,” Martin said.

He and his girlfriend got back on the lift and he thought he’d feel better after the rest. But he didn’t. They went into the Glen House and sat down to rest.

“I started to sweat and my chest hurt,” he said, so he asked his girlfriend to ask the ski patrol if there was a place he could lie down for a minute.

When interviewed last week Martin said that he felt he was generally pretty healthy and active and plays volleyball, skis, does yoga and walks his dog. He said that he was aware he had some cardiac disease, having learned a year ago that he had a 30 to 40 percent blockage in one of his arteries.

“I certainly didn’t expect this,” he said.

A ski patroller, Andreas Panos, came back with Martin’s girlfriend and suggested that it might be smart to bring him down the hill.

They put him in the sled and he started to relax. Panos piloted the sled down the slope while ski patroller Leo Crain skied alongside him, talking to him and checking in with him every minute, asking him how he was feeling.

At some point, he stopped responding, which Crain noticed immediately, and a third patroller, Allie Burhans, checked for a pulse and found none. They got him unwrapped and his jacket off and Burhans started CPR compressions right away while Crain cut his shirt open and prepared the AED to analyze the rhythm.

Here’s where everything that could have gone wrong went right. The Sugarbush ski patrol is using a new protocol with cardiac arrest that was developed in Portland, Oregon, at the Resuscitation Academy called High Performance CPR. It focuses specifically on uninterrupted high-quality compressions with adequate recoil time for better profusion of the brain and heart, according to Mad River Valley Ambulance Service volunteer and CPR instructor Howie McCausland, who trained the Sugarbush ski patrol in the technique.

“It calls for continuous compressions except when the AED is analyzing the heart rhythm or delivering a shock. Previously, people were told to stand clear and move away from someone receiving an AED shock, but that’s not necessary. There’s no need to flee. The person giving the compressions can just remove their hands while the shock is delivered and then return immediately to the compression. It’s like a NASCAR pit crew,” McCausland explained.

Compressions should be delivered at a rate of 110 to 120 per minute, equivalent to the bass beat of the song “Staying Alive” or “Another One Bites the Dust,” he added.

“After the shock, I delivered another 15 to 20 compressions and then I saw him moving. He reached up toward my hand,” she said.

“He was completely alert. I’ve never done CPR on a person before. It was crazy to see it work that well,” she added.

Martin was breathing on his own and was delivered to the clinic and then the ambulance and taken to UVM Medical Center where he received two stents and a prescription for cardiac rehab.

“Early defibrillation within seconds of him coding and continuous high-quality compressions saved him. And a baby aspirin – I gave him one before we started down with the sled,” Crain said.

The placement and roles of the three patrollers, i.e., who was managing the sled and who was carrying the AED, depended on how the call comes in.

“Andreas was the first responder and he called for the AED and backup. He had oxygen with him. When Leo and I arrived, Leo gave him aspirin and oxygen and I gathered his skis,” Burhans said. She’s been patrolling for five years, out West and at Sugarbush.

Crain has been patrolling for 18 years at Sugarbush and this was the first time he had done CPR on a real patient.

Martin returned to Sugarbush last weekend to meet with the ski patrollers who saved his life.

“I really feel they saved my life because they were so up to date in technique,” he said.

“And they were gentle about getting me to agree to going down to the clinic in the sled. They convinced me without pushing me and I felt so well taken care of and having Leo skiing right next to me and checking with me made me relax,” he added.

He’s feeling better now, regaining his strength, but won’t be skiing any more this year. He had planned a ski week in British Columbia with his 23- and 26-year-old children in March, and now that won’t be happening. But he’ll be able to ski with them again, thanks to the training and fast action on the part of Sugarbush’s ski patrollers.