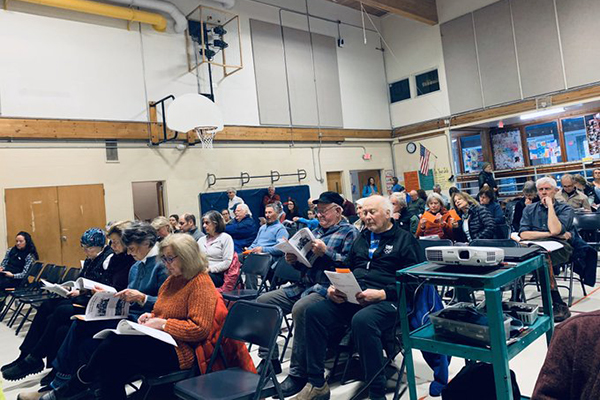 In Warren, voters approved a town budget of $3,707,211 for fiscal year 2020. In his budget presentation at Town Meeting, Warren Select Board member Bob Ackland pointed out that 42% of the town’s budget goes to the highway department to repair roads and bridges. He also brought up items that are causing the budget to increase from last year, one of which is the addition of a Department of Public Works position that offers a competitive salary and benefits for someone to manage town maintenance projects. Ackland said that he hopes providing good jobs will attract young people to the town of Warren.

At the beginning of the meeting, state Representative Maxine Grad spoke to update the town on her work at the State House, as she did in other towns. One thing she mentioned was her work in incarceration reform in the state of Vermont. “Incarceration rates are still an issue in Vermont. We need to think about who we are incarcerating and why,” said Grad at the Warren Town Meeting.

Mad River Valley Ambulance Service will receive $15,000 from Warren in 2020. Before the vote, Sarah Spencer, MRVAS volunteer, explained why she loves working for MRVAS as a volunteer. “We are all volunteers. Nobody is paying is to be there. We all want to be there,” said Spencer. Some voters wanted to know how often MRVAS serves Sugarbush. “One-third of our call volume is from Sugarbush,” said one of the volunteers. Spencer pointed out that since nearly every Sugarbush call is medically insured, Sugarbush is the ambulance’s biggest revenue generator.

“The environment is unwinding. We have lost over 40 percent of our songbirds. The things we have done to conserve nature have been insufficient,” said conservation commission representative George Schenk. “As a community we need to decide if this is an important subject.” One voter protested by saying that conserving land would contribute to the affordable housing problem in The Valley. To this, another voter spoke up, saying, “I don’t think it’s fair to attach affordable housing to conservation of ecological systems. There is no price on the environment. It is priceless,” she said.

Select board member Ackland also advocated for an amendment to give more money to the conservation commission than what was originally allocated. “This is a crisis. If we don’t wake up and start shaking the leaves, putting money in the bank and being able to deal with this, I’m old enough that I’m probably not gonna have to deal with it. But you people that are younger, you are in a crisis. If you don’t step up and deal with it, I feel sorry for you. Putting more money into this fund is that onerous. If you look at it on a per-person basis or a per-tax bases, it’s peanuts. But if you don’t start, you’re not gonna get there. End of story,” said Ackland.

Next, Warren voters approved spending $84,000 to permanently protect 1.3 miles of the Catamount Trail, water quality of Lincoln Brook and the Mad River, and 512 acres of forest near Lincoln Peak as additions to the Green Mountain National Forest. This money was already in the bank to be used for conservation purposes.

At the end of the meeting, Warren voters made a nearly unanimous nonbinding vote of no confidence in HUUSD Superintendent Brigid Nease.

Next year’s Warren Town Meeting will be held at Warren Elementary School at 4 p.m.