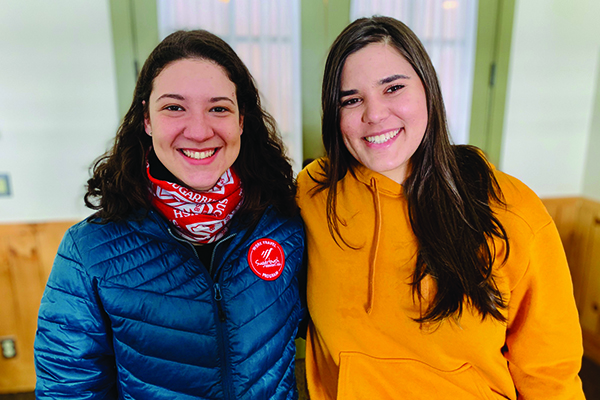 “Last year I was here working in food and beverage. I really enjoyed it here and told my mom that I wanted to come back. And I came back this year as a lift op,” said Isabela Baxhix, a 24-year-old biomedical engineering student from Sau Paulo, Brazil. Baxhix wasn’t used to the cold when she arrived in Vermont in 2018. Working mornings in the parking lot that first winter, the cold made her cry.

Still, she came back for another season, eager for a change of scenery and another chance to ski. “In Brazil, I used to love summer. I used to love every single day of every summer going to the beach and everything. But then it was like … hmm. We do this every year. And last year working in food and beverage, I couldn’t ski as much as I wanted. So, I thought, OK, let’s go back again so I can ski more and improve.”

Another J-1, Livia Azevedo, a 21-year-old linguistics and literature student from Rio, Brazil, agreed: She needed a change. “I wanted something different. We have a lot of beaches in Brazil. I had never seen snow. I had never skied, never snowboarded. There’s no snow at all in Brazil. I was like, well, if I’m going for the winter, let’s just go for it,” said Azevedo.

The girls chose Sugarbush specifically because it was closer than other ski resorts to the American cities that they wanted to visit: New York, Boston and Washington, DC. As for the work abroad program in general, the girls have different motivations for choosing it.

Baxhix wanted to make money. “One of the main reasons that I keep coming back here is that it’s a good opportunity to raise money. When I graduate, I want to raise money to go to postgrad here in the U.S. or in Europe,” said Baxhix. In addition to working as a chairlift operator, Baxhix works at Fit to Be Thai’d, a Warren restaurant.

Holiday weeks are the most intense for Baxhix, who works at Sugarbush during the day and at the restaurant at night for up to six days in a row during those busy weeks. “During holiday weeks I’m like, oh my god, I’m so tired. Those days I usually just go home, take a shower and go to bed,” said Baxhix.

Still, this engineering student is always looking for an opportunity to work more hours. “Last year, our boss here didn’t let us do extra hours, so we had 40 hours and that was it. I really needed extra, so I got a second job. This year, our boss allows us to do extra hours; not as much as we want, but he lets us. We have a couple weeks that we can work six days from 6:30 until 5 so that’s more than 10 hours a day. And the extra hours are over pay so it’s good. And with a second job, that’s amazing,” said Baxhix.

The girls agreed that the program quickly pays for itself. The base program cost is $1,800, which includes the interview process, the sponsor fees and health insurance. Once in the states, students pay for their own food and housing. Sugarbush puts up students in Sugarbush-owned housing complexes like the Christmas Tree Inn, where they pay $450 a month for a two-person bedroom or $225 a month for a four-person bedroom.

“It’s $450 each, but for everything. We have the house, heating, water, TV. And it’s still less than if we were to try to find rent by ourselves,” said Azevedo. “We get paid enough to cover our expenses, since it’s basically just travel and food. Our pay is over the state minimum of $10.96 an hour,” said Azevedo. “Not even a dollar more!” protested Baxhix. “But still, it’s more,” said Azevedo.

For Azevedo, this work abroad program gives her a much-needed break from her demanding student-teacher schedule in Brazil. “I’ve been working as an English teacher since I was 16. My last couple years of high school and all throughout college I was teaching and studying. I went to college during the morning, and in the afternoon and night I was at a language school teaching English. So, for me it’s nice to be here and only have one responsibility,” said Azevedo.

“Teaching is a job with a lot of responsibilities. You’re dealing not only with students but correcting homework and correcting tests, going to meetings and talking to parents. It’s a really nice break for my brain, cause its very tiring to put yourself through college while working.”

Additionally, Azevedo sees the work abroad program as an opportunity to soak up experience in a country that she might want to live in more permanently someday. “I’m also thinking of going to graduate school. In Brazil you have to write a thesis to graduate. Mine was on theater translation. So, I would love to find a program here that would accept me in translation. I don’t know if I would continue teaching, but I’m all about opportunity, so whatever I find that will make me happy or give me more experience in life, I’m going for it,” said Azevedo.

While both girls spoke favorably about the program, they agreed that adjusting to life in the rural countryside was hard. “We went to Boston last month and we were so excited to see buildings! And hear cars honking! It’s really crazy for us to not have any noise,” said Azevedo. “And we have to go to another city just to go to the supermarket!” she said, referring to the trek from Warren to Waitsfield. “And still, that city is just a couple streets and that’s it. It’s crazy!”

HAVEN’T BEEN TO WORTHY BURGER

As for transportation, the students mostly rely on the Green Mountain Transit shuttle buses, which stop running in the early evening. “We only get the shuttle late on Saturdays. The other days by 5 o’clock, we’re home. We wait for the last bus that comes at like 5:20. And after that … we can’t do anything. We haven’t been to Worthy Burger or to The Mad Taco because we can’t get there!” said Azevedo. “People don’t get how remote this is for us. Our friends and family at home say, why don’t you take an Uber? Why don’t you walk? Why don’t you take a bus? And we’re like, you don’t get it. There’s nothing here.”

When the students do explore the area, it’s with the fleet of vans that Sugarbush uses to transport J-1 students to various cultural events around the state. “We do get a lot of opportunities with HR to go to other places. This year we went to Bolton, skiing. Today there’s a brewery tour. Next Monday we are going to Jay Peak Resort. We went to the movie theater. We went bowling. We did a lot of stuff,” said Baxhix. “We don’t have cars or a way to get around so it’s really good that they do that for that for us.”

Sugarbush also ensures that students have a chance to explore the states by offering them time off when they ask for it, as long as they provide a two-week notice. “There was one girl who got 10 days off because she wanted to go to Orlando Disney,” said Baxhix. “They’re very understanding when we want to travel.”

In addition to rural-town-related transportation inconveniences, the Brazilians girls have experienced other frustrations. “One of the things that bothers me the most is when people talk to us in Spanish,” said Baxhix. “Because in Brazil, we speak Portuguese. They’re like, ‘Hola. Como estas?’ I do speak Spanish, but still, I just say, ‘I don’t understand you, sorry, I’m from Brazil.’ It’s a little bit of a pain in the ass. They are just trying to be nice, but they don’t realize. And it’s like, ugh, not again.”

While some Sugarbush guests and workers approach the girls in Spanish to be nice, others do it assuming the foreign employees don’t speak English. “I found that sometimes people treat me like I’m kind of stupid because I’m a J-1. But what some people don’t realize is that to be a J-1, you need to be in college. So, we are not stupid. We are actually pretty smart,” said Baxhix.

Azevedo told her own story of an assumed translation problem. “The other day I was working the top and a ski patrol said something that I couldn’t hear because I was under the terminal, which was making a lot of noise. I touched my ear like, ‘I can’t hear you.’ And he yelled ‘Aguaaaa!’ which is the word for water. I was like, I know how to say water. I just can’t hear you! The problem is not the language! Sometimes just because we’re J-1s they assume we don’t know English.”

Still, Azevedo emphasized that, in general, the local people have treated the J-1s very well. “Ah. I didn’t want to get political, but I always do. Trump is in government. With all this trouble with foreigners and all that stuff. Even though Vermont is a democrat state and all that, we come not so sure about how we’re going to be treated, if we’re going to be treated right, if people will be rude to us maybe, or think we are not capable of doing the same things, or that the English is going to be a huge barrier. Although we get that from guests sometimes, most people do not treat us like that. They’re actually very interested in knowing us and are interested in what brings us here. The people are nice here to us.”

At their jobs as lift operators, both Baxhix and Azevedo get to meet and interact with many Americans. However, this is only true when they are working the bottom of the lift. “The lift op job is really good because there are a lot of Americans doing it. In the cafeteria it’s all J-1s. So as a lift op, I got to know more people this year than last year. The only bad thing is that in January they put me to work at the top of the lift, so I stopped being social,” said Baxhix. “The top is good because we stay inside, but it’s hard because you’re by yourself. In the beginning I was like, why? Why do I need to be at the top? I just want to be near the people!”

LONELY AT THE TOP

“It really is like that,” said Azevedo. “When you’re at the top, you can get very lonely, so you need to have like a speaker, and hope for a break for someone to come and talk to you.”

“That’s one thing I miss the most in Brazil,” said Baxhix. “ It’s so nice when you wake up in the night and you can go to your bathroom and just get a glass of water and drink it, and not go all the way to the kitchen and go to the filter just to get water.”

“Another thing I will miss is that cars actually give passage to you when you’re on the street. If you step on the street, they stop. In Brazil it’s not like that,” said Azevedo. “You might get run over!”