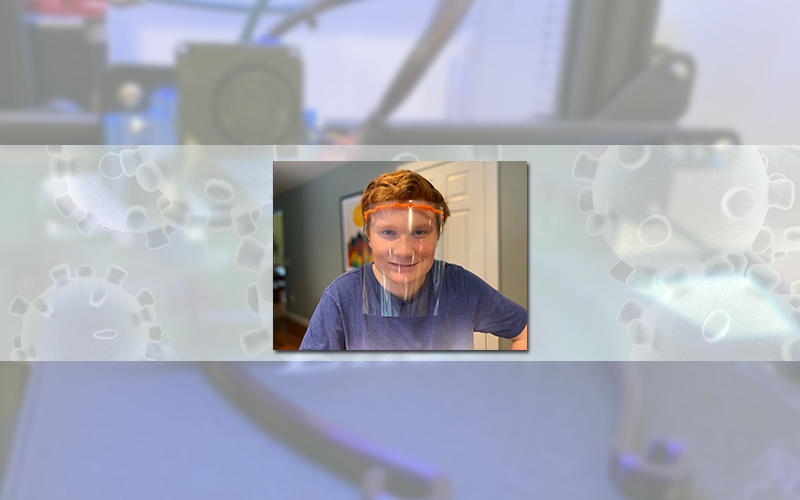 A handful of local makers, two Harwood Union High School STEM teachers and an architect from Warren and NYC have teamed up to produce and deliver 240 3D printed face shields for Central Vermont Medical Center over the last three weeks.

Noah Schwartz, Waitsfield, was sitting next to his homemade arcade cabinet when he picked up the phone to talk to The Valley Reporter on a Friday morning. “I love making stuff,” said Schwartz, a 15-year-old sophomore at Harwood Union High School. Schwartz is part of the Maker Movement, a technology-based extension of do-it-yourself culture, which champions the idea that the best learning is done through doing. Among his recent projects are an Arduino board based control box meant to count the number of rocket launches produced by his homemade rocket launcher, and a Nixie clock, made from glass tubes filled with a wire-mesh anode and cathodes shaped like numerals.

Schwartz has a new project these days. With other local makers, he’s been making protective face shields for essential workers on the front lines of the coronavirus pandemic. Schwartz makes masks with his own 3D printer, one which he bought using the proceeds from Noah’s Fizzy Lemonade, the business he started at age 7.

While he was doing that, Kyle Bergman, an architect from New York who has had a home in Warren Village since 1986, was wondering if local architects had 3D printers capable of producing projective gear. He reached out to Eddie Merma, a local maker and founder/director of Sculpture School, who put him in touch with Schwartz. Schwartz, in turn, put him in touch with Harwood STEM teachers Zachary Clements and Brian Wagner.

“After Eddie put me in touch with Noah, we got everyone on the phone. I reached out to the local design community while these guys started printing,” Bergman said.

Then he reached out to Central Vermont Medical Center to see if they needed the face shields and they were thrilled, he said. But first they wanted to see a prototype. The local group supplied them with three, which they accepted and put into use that day.

“I had 20 printed before Eddie connected me with Kyle, who wanted to help get these things to the hospital. Kyle did the logistics and coordination. I connected him with my teachers, Brian Wagner and Zach Clements, who got the OK to take home the school’s 3D printers. They started printing themselves and delivering masks. I give my masks to Mr. Wagner and he brings them to the hospital,” said Schwartz, explaining the logistics behind getting masks to health care workers.

The process of making a face shield involves using a hospital-approved design, said Schwartz. “The filament we use is PEPG. This filament is good because it can be disinfected with bleach. It’s bendy and stretchy, so no band is needed to help it stay put.” While the brim of the face shield is made using a 3D printer, the shield portion is made using film transparencies meant for overhead projectors (i.e., clear plastic sheets). “We punch holes in the film transparencies and assemble them,” said Schwartz.

Each 3D printer can produce eight to 15 headbands per day and the process requires a lot of babysitting, according to Wagner, who is also teaching remotely, full time, while monitoring one of the printers that he and Clements were given permission to bring home from Harwood.

“What’s amazing is that it’s one small way we can help,” Bergman said, noting that Tammy Haskin has been collecting the assembled face shields from each maker’s porch and delivering them to CVMC.

Bergman said that the cost of the filament for printing is $60 per kilogram and the cost of 100 sheets of plastic is $40. People can contact him at This email address is being protected from spambots. You need JavaScript enabled to view it. for information on where to order supplies to deliver to the local makers.

The local group, which now includes Schwartz, Clements, Wagner and Ben Egan, Duxbury (who had been making them on his own prior to joining forces with the others), has the capability to make almost 400 a week now and has learned that CVMC has sufficient quantities so the face shields will be made available for local folks on the front line, including those working in businesses deemed essential such as postal workers, grocery store workers, etc.