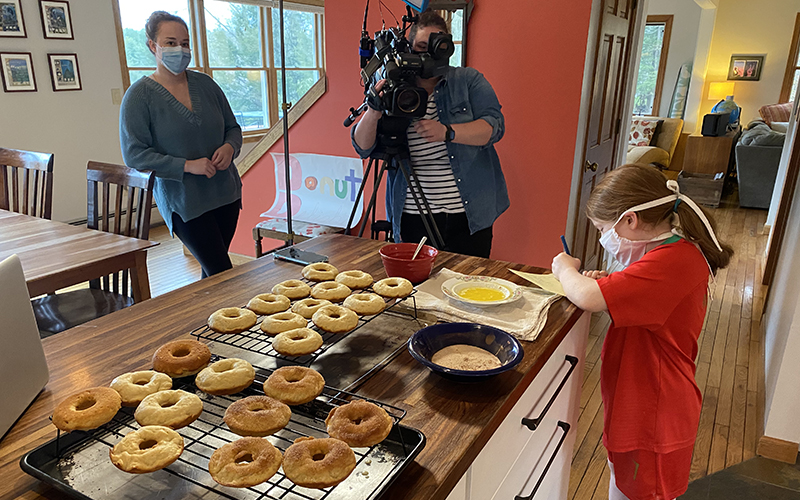 Since the statewide stay-at-home order happened in March, 9-year-old Maclyn Buckingham of Waterbury Center has taken the opportunity to launch the doughnut business she had been thinking of.

Now her Donut Delight baking and delivery project has been such a hit that she and her family made the WCAX news. A Channel 3 crew recently filmed and interviewed Maclyn as she made doughnuts and explained how it got started.

Before the COVID-19 virus outbreak closed schools across the state, Maclyn and her friends brainstormed the name Donut Delight and originally wanted to have a doughnut stand on their road. But once the stay-at-home order was implemented, there was time to bake but the stand was no longer a practical option.

With her parents’ help, Maclyn started making doughnuts every Friday to deliver to her neighbors. Each week she makes around 24 doughnuts. Happy to get the treats, neighbors started chipping in to pay Maclyn for her efforts.

She is donating the money she’s collecting to the Waterbury Food Shelf. As of Wednesday, Maclyn had raised a total of $470. Her neighbor Mark Frier, owner of the Reservoir Restaurant & Taproom, told Maclyn that once she raises $1,000, he will donate another $1,000 to the cause. A post on the downtown Waterbury pub’s Facebook page announces the matching donation plan with some encouragement, too: “Go get'm Maclyn, let us know if we can help!”

Laura Parette, a neighbor of the Buckinghams, pitched the story of Donut Delight to WCAX. Despite the many restrictions on social interactions, the TV news crew was able to conduct the interview last week. They asked the Buckinghams to wear masks, and the reporters wore masks and gloves. Social distancing was practiced throughout.

“I was nervous at first, but they were really nice,” Maclyn said. She said the interview lasted only around five minutes, but the reporters stayed an hour to watch and film the baking process. “They filmed from the dining room while we baked in the kitchen.”

Although Maclyn does not usually bake for fun, she said she has enjoyed being able to cheer up her neighbors with her project. She said her favorite doughnuts of her own are cinnamon sugar along with glazed doughnuts. “I like dipping them in the glaze,” but “[Cold Hollow] cider doughnuts are my favorite.”

Other than baking, the fourth-grader said she has been video-chatting with her friends and playing outside when not focused on schoolwork lately.

She says she doesn’t know if she will continue making doughnuts every Friday after the stay-at-home order is lifted. “I haven’t made a decision yet. Maybe every other Friday,” she suggested.