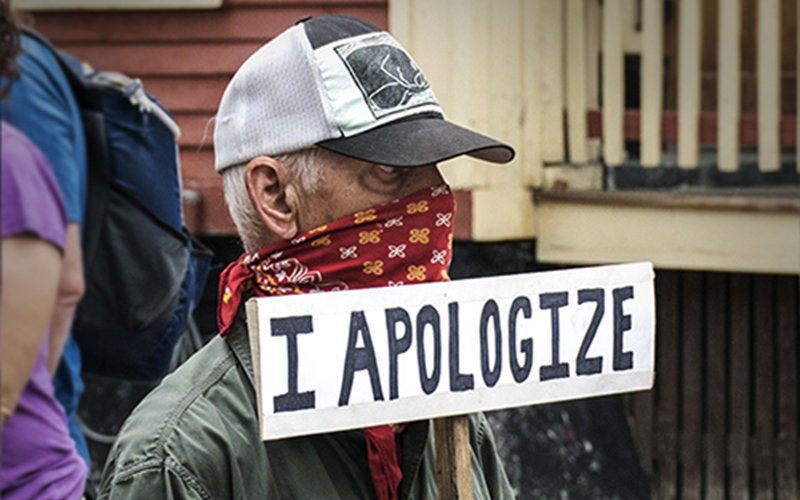 “Racial equality now.” “I can’t breathe.” “Silence is violence.” “What happened to George Floyd matters to Vermont.” “End systemic racism.” “I apologize.” These were the painted words of Mad River Valley protesters, who gathered behind the United Church of Christ in Waitsfield early Saturday morning, June 6.

The Mad River Valley Anti-Racism Initiative organized the gathering in solidarity for racial justice. Protesters rallied in honor of George Floyd and against the systemic police violence against blacks that his death represents.

“We are here to demand justice. We are here to honor the lives that have been lost to senseless, state-sanctioned violence,” said rally organizer Wrenn Compére, music therapist, activist and longtime Waitsfield resident.

Looking out onto the sea of khaki shorts and bucket hats, Compére acknowledged the predominantly white turnout. Thus, in her speech, she recognized the protesters as fellow white citizens. “We are determined to do our part as white citizens and to acknowledge that being white in America entails privilege,” said Compére. “We resolve to learn, to grow, to help one another and to use our power to dismantle the unjust systems of racial oppression in our homes, in our town, in our state, in our country and in our world.”

Compére then invited protesters to take a knee, for 8 minutes, 46 seconds, the same amount of time Floyd was pinned to the ground by the police officer who took his life. After minutes of silence, the 100 protesters peacefully took to the streets, lining Route 100 on both sides with their homemade signs.

Many drivers honked in solidarity with protesters as they were driving by. Even as the blue sky turned to gray and the dry air turned wet with rain, protesters stood their ground for the cause.