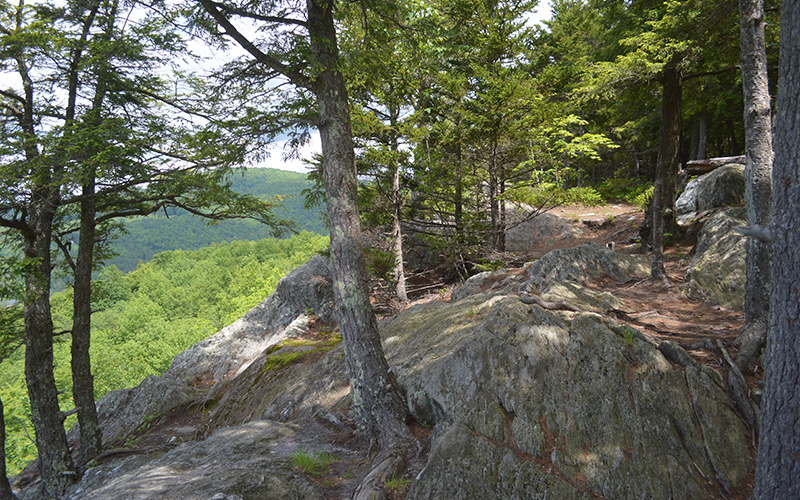 The Waitsfield Conservation Commission revisited the issue of public access and parking for Wu Ledges and found that previous problems have been resolved.

The commission, at a June 15 meeting, discussed whether further action and signage was needed to get the public to respect private property as well as the appropriate parking locations for access to Wu Ledges.

There is designated parking at the top of Hastings Road but people also park on other local roads in the area to hike into Wu Ledges. Additionally, people also hike in from the Waitsfield Village cemetery on Bridge Street.

Earlier, when Covid-19 Stay Home, Stay Safe orders were eased and people were encouraged to seek opportunities to recreate outside (away from others), the commission received complaints about overcrowded parking areas.

Phil Huffman, chair of the conservation commission, noted that at its May meeting the commission discussed issues with neighbors on Hastings Road and Hastings Meadow.

“We took some steps on our own and with partners to try and address those. My perspective, over the last four weeks is that things are in a much better space than they were in spring. I haven’t heard any complaints for several weeks now. Does that synch with what you’ve been hearing?” Huffman asked.

Commissioner Curt Lindberg said he’d been up a few times in the last few weeks and found parking available and no one parking in the wrong places. Commissioner Bruno Grimaldi echoed that finding.

“I went up a week ago Friday. It was a gorgeous Friday afternoon and I thought if anyone was going to hike, it’s going to be today. I went to Scrag and Wu Ledges and didn’t find any cars in sight. I had one person call and ask me about signs for trails on Wu Ledges. I told him to follow the yellow tags,” said commissioner Leo Laferriere.

Commissioner Bob Cook said he hadn’t gone looking for trouble for the last couple weeks. He said he felt the commission should be throttling some of the no parking signage down.

Huffman suggested that with more trails open and more recreational opportunities for people, that he’d be open to the idea of easing off some of the signage. He asked Cook to touch base with Hastings Meadow landowners to see how they felt about removing some of the signs. Cook agreed to do so.

Huffman also shared with commissioners the fact that a national bill with bipartisan support that would double funding for conservation nationwide was likely to pass on June 17 and the president was expected to sign it.

“Today is a really great day for conservation in the U.S. This bill would double funding for conservation permanently, from $400-450 million a year to $900 million and it will be paid for entirely with revenues from offshore oil and gas leases,” he said.