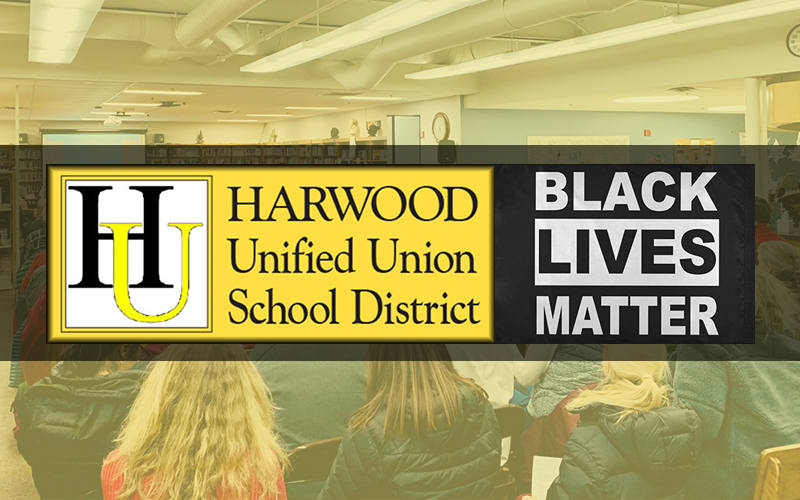 “I don’t know what to do. I really don’t know. I thought I heard a message at the rally, but I’m being told it’s wrong now,” said Harwood Unified Union School District (HUUSD) Board member Michael Frank, Waterbury.

In many ways, Frank’s words epitomized the entire school board’s reaction to the evolution of the racial equity debate that transpired at the school board meeting on June 24. At the meeting, Sarah Schoolcraft and Tom Drake, two HUUSD principals, brought a proposal signed by all HUUSD principals before the board, asking it to approve flying Black Lives Matter flags at all HUUSD campuses. Their reasoning was that flying these flags would “provide a tangible symbol of the HUUSD commitment to help to reverse systemic racism by fueling and supporting anti-racist behavior in our communities.”

At first, the all-white school board generally supported the flag idea, eager to take a stand against racism in the community and beyond. “I completely agree with putting up the Black Lives Matter flags,” said Alexandra Thomsen, Waterbury.

Board chair Caitlin Hollister also expressed initial approval for raising the flags. “I’m excited about this effort here because we’ve heard a lot recently, especially from the young people in our towns, that the adults need to step up.”

When someone raised a question about how long the flags should be raised, Kelly Hackett, Waterbury, said, “My vote would be to keep the flags up indefinitely.” Theresa Membrino, Fayston, even suggested that the board create a racial equity metric to judge how safe local people of color feel and to keep flying the flags until an ideal safety metric is met.

Interestingly, when it came time to vote on flying the flags, all board members mentioned above either abstained or voted “no.” Why such a change of heart? The board members’ opinions seemed to sway in the opposite direction at the last minute after hearing a series of public comments urging them not to fly the flags.

“Please please please please don’t do this!” said Life Legeros. Legeros told a story of a Harwood teacher working with a student leadership group last year who suggested the school put up a Black Lives Matter flag. When that teacher asked students of color for their input on the flag, according to Legeros, the students pleaded the teacher not to put up the flag. “I know you have good intentions, but you’re rushing to try to do something good, and you’re going to do more harm,” said Legros. “When this shit goes sideways, the people who suffer most are always the people who are most impacted by this.

Brenda Hartshorn, Duxbury, was the next to speak during public comment. She told a story about her own experience making “a foolish suggestion with good intentions.” After a Black Lives Matter rally in Burlington, Hartshorn found a BLM flag on the ground and suggested to her black friends that they give it to the Burlington Police Department to fly over the police station. “I immediately was jumped on by five black friends of mine in that conversation,” she said. “They were really angry at me for bringing that up, and I didn’t understand why. They felt it was performative in nature, and they were upset because they hadn’t seen action yet. I am very concerned that if we do that in this district without doing the work we need to do ahead of time, it may do more harm than good.”

The creation of an anti-racist HUUSD task force was the next racial equity issue on the table. This proposal was also brought forth by principals Tom Drake and Sarah Schoolcraft. Drake explained that the task force would be made up of 14 staff members across the district’s seven schools, with likely no representatives of color given the lack of diversity in the HUUSD staff.

Given the public criticism the board had just received for not including people of color in the flag conversation, the board determined it necessary to bring a third party person of color to guide the task force. “It’s important that we get the right people involved in the task force,” said Kristen Rogers, Moretown.

Eventually, the board voted to task a subcommittee to do the prework for request for a proposal (RFP) regarding bringing in a third party to support the anti-racist task force. In other words, the board is looking into hiring a full time diversity trainer for the district. The weighted vote passed 49.80 percent to 21.75 percent, with seven board members in favor of starting the diversity trainer research processes, three board members in opposition, and three abstaining.

“People want action in this district, but they want us to be thoughtful and make a plan. This is investigation that needs to be done in order to make a plan,” said Membrino, speaking to the motion to do research into hiring a diversity leader. “It’s not doing nothing, but it’s not doing something that’s impacting. It’s exploratory. That’s what this is about.”