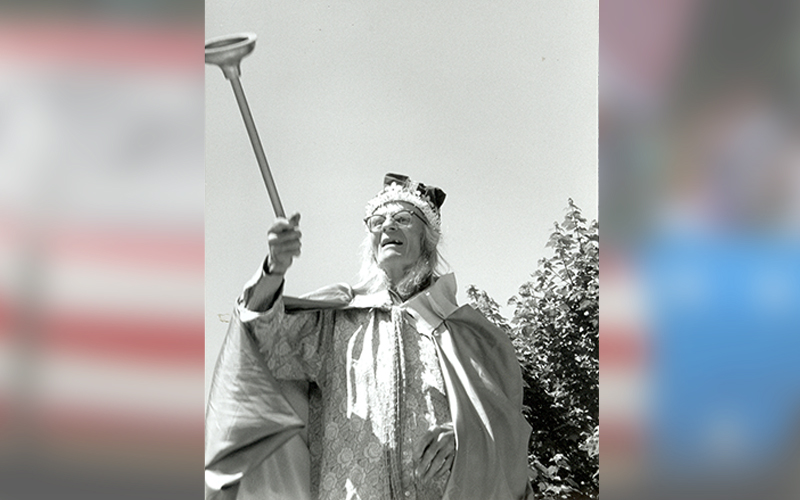 Editors note: Without a Warren Fourth of July celebration to cover, The Valley Reporter turned to its extensive archive of pictures and stories about Warren's annual celebration this year. Join us in reveling in parades, floats and foibles of years passed. This week we take you back twenty-five years to the 1995 Warren Fourth of July Parade. We hope you enjoy and we look forward to seeing you in Warren again soon.

By Phil King and Lisa Loomis

In perhaps one of his best roles yet, Waitsfield’s Hap Gaylord donned a crown and royal robes to wave a toilet plunger as scepter to a receptive crowd of parade-goers during Warren’s annual Fourth of July parade, street party and field fair.

Gaylord, (or King Hap as he was known for the day) led a float dedicated to Vermont pulling out of the union to form its own more perfect sovereign nation. That float, with its depiction of Governor Howard Dean as the court jester; Hillary Clinton as the goddess of stretch pants, a baroness of BGH and much more, received the most imaginative award from parade judges.

The annual Fourth of July parade got under way at 10 a.m. and attracted the usual thousands upon thousands who crammed the streets, sidewalks and lawns of Warren’s tiny downtown for a glimpse at the unique, political and comical floats entered into the parade.

In an interesting juxtaposition, a float by Sugarbush shared the award for funniest with Prickly Mountain’s annual mammoth production. Sugarbush’s float this year featured a chairlift running through a beech forest, complete with two bullwheels, several chairs bearing bears and other happy forest creatures.

Prickly Mountain’s extravaganza featured a huge black bear that reared up on its hind legs to roar. The bear was accompanied by dozens of supporters and bear fans bearing signs and placards with various and sundry political comments.

Speaking of bears, the right to bear arms, the right to arm bears and the right to bare arms was the subject of Moretown’s South Hill Road Militia. That float featured a giant raisable arm that when fully extended, was bared with a great flourish. The float was accompanied by a cadre of children as foot soldiers, marching to a drummer. The soldiers carried bare arms and performed military drills with these weapons. That float was deemed most patriotic.

The award for best overall float went to a newcomer to the Warren parade, the Yestermorrow School and Design Build Group. This float was a series of separate houses or building frame pieces, including a tower, walls and windows. Float bearers marched along the parade route, periodically stopping to assemble the building in the street.