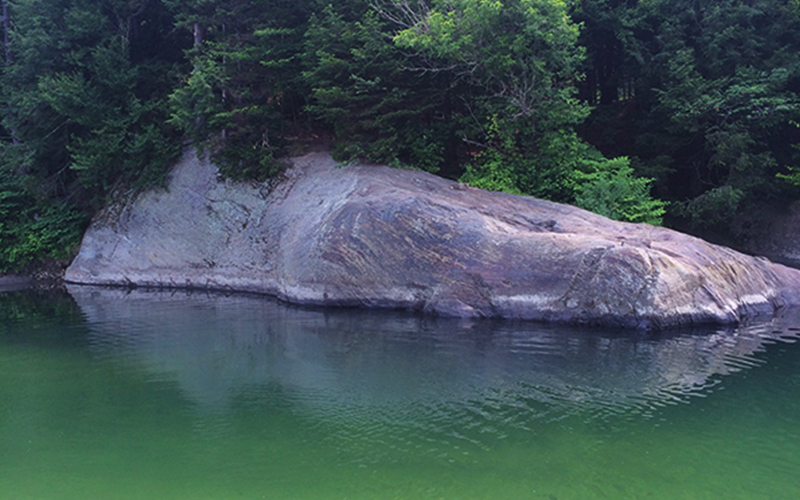 2020 marks the Friends of the Mad River’s 30th anniversary. With the vision of “A thriving and resilient Mad River Valley, sustained by healthy land, clean water and an engaged community,” Friends of the Mad River has initiated and supported scores of waterway and watershed projects in those three decades. From its signature water quality monitoring Mad River Watch, to assisting with municipalities’ establishment of Fluvial Erosion Hazard Area Overlay Zoning Districts, to conservation partnerships that have led to public access at popular swim holes, to an extensive oral history archive preserving stories of early and mid-20th-century life in the watershed, to its current Ridge to River initiative for flood resilience, FMR is rooted in hard science as well as in the community.

To commemorate Friends of the Mad River’s anniversary this is the first of a series of articles that will explore FMR’s origins, projects, lessons learned and potential for the watershed and the Mad to be, as its original conservation plan states, “The Best River Ever.”

Interest in the Mad River surged in that late 1980s. Three factors were drawing local attention to the river -- a plan, a program and a proposal. The Mad River Valley Planning District Rural Resource Protection Plan, the Mad River Watch volunteer water quality monitoring program and Sugarbush’s proposal to expand snowmaking all heightened awareness of river issues. All contributed to the founding of Friends of the Mad River in 1990.

“Let’s look into taking this energy that is on the river and turn it into something positive,” said Kinny Perot, Warren, FMR co-founder recalling the genesis of FMR. Perot and others recognized that the moment provided an opportunity to start a watershed organization that could consider many factors affecting the Mad River and to develop a conservation plan to steward Valley land and water for present and future generations.

The 1988 Rural Resource Protection Plan was developed as a project of the Mad River Valley Planning District. Over 240 Valley residents participated in its process. Its goal was to conduct an inventory and develop conservation strategies for The Valley’s rural resources including historic, scenic and agricultural and river and trail.

Many local initiatives were rooted in this plan: designation of local historic districts to the National Register of Historic Places, founding of the Mad River Path Association, recommendations for resource protection measures in town plans.

Regarding the river, the plan noted the river’s recreational importance, with 44 known swim holes as well as fishing spots and boating access. Only an abbreviated list was published as almost every one was on privately-owned land. Maintaining swimmable, fishable water was a priority, noting that at times water quality did not meet safe standards. The plan encouraged property owners to comply with clean water regulations. It also encouraged public acquisition of critical recreation areas -- a priority that has had considerable success with Green Mountain National Forest acquisition of Warren Falls, public ownership of Warren’s Riverside Park, Waitsfield’s Lareau Swim Hole and more.

With origins in the 1970s on the Ottauquechee River, River Watch Network was founded to inspire local people and local communities to revive their own rivers. The program spread through Vermont and across the country. Mad River Watch started in 1985.

Today, as in the 1980s, Mad River Watch volunteers collect water samples at swim holes and other sites at regular intervals throughout the summer. The samples are tested for E. coli bacteria. It is estimated that at the level of 235 colonies E. coli per 100 mL water, approximately eight out of every 1,000 swimmers are likely to contract a waterborne illness related to fecal contamination. For 35 years, the community has had access to this public health information, and local residents have become remarkably savvy about recognizing when to stay out of the water. The test results have also helped identify problem sources.

The plan involved direct withdrawal of water from the Mad River and a snowmaking pond adjacent to the river. Along with enthusiasm for the proposal, there were concerns. What would the withdrawal mean for fish habitat and for the overall health of the river? Would shallower flow and anchor ice scour the riverbed? Would the pond blow out of its confinement during floods?

Recognizing that there were myriad questions, Perot organized a public meeting with river experts. Phil Huffman, then of the National Park Service, and John Echeverria, then of American Rivers, spoke to a full house at the Warren Town Hall about the Wild and Scenic River program. The meeting brought together diverse voices, and in its aftermath, determination to move ahead, beyond snowmaking, to develop a science- and community-based conservation plan for the river.

Five years later, the “The Best River Ever: A Conservation Plan for the Mad River” was published and guided important conservation projects for over a decade.

Gow lives in Warren and is a former member of the Friends of the Mad River board of directors.