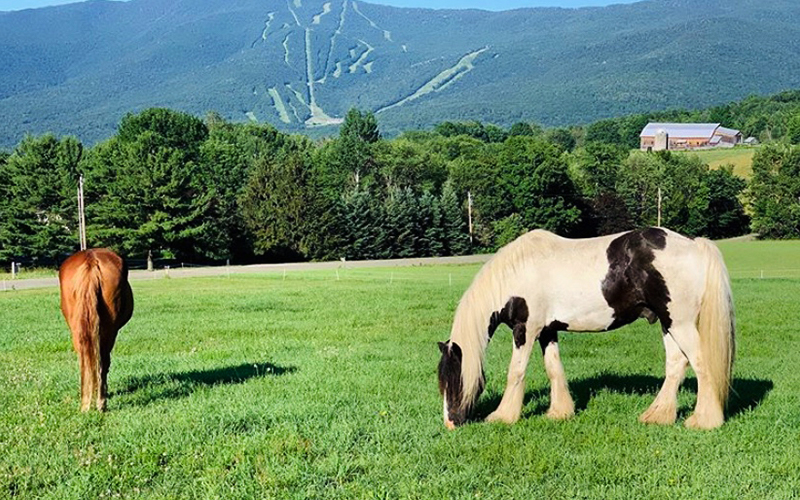 “When you’re doing something that you love and that you’re passionate about, it’s never hard,” said Bowen Holden of Ellen’s Overlook Farm.

Two years ago, Bowen Holden, Charlie Martin and their three kids aged 13, 11 and 9 moved into the former Vasseur farmhouse on Kew-Vasseur Road in Fayston to live the Vermont family farm dream. “It’s been a dream of mine since I was a child to live on a farm,” said Holden, who has been an avid animal lover since childhood. “I grew up in a suburb of Boston that has a rich farming history, so I grew up around animals, haying and farming.”

Before moving to the Vermont farmhouse, the family lived in Massachusetts. “We decided to move up here both for a lifestyle change and because I also work at GMVS. That’s my real job,” said Holden with a laugh. At Green Mountain Valley School, Holden is director of admissions and coaches skiing. All three of her kids are ski racers.

The family actually named their place Ellen’s Overlook Farm in part because it “looks over” Mount Ellen, where they spend their winters skiing. It also gets its name from Holden’s grandmother, Ellen, who instilled a love for nature and animals in Holden from an early age. “We feel she is always overlooking us,” said Holden.

Animals on the farm include two horses, chickens, turkeys and dogs. The chickens produce free range non-GMO eggs that the farm sells to Mehuron’s Supermarket in Waitsfield. The farm also sells chickens every month as pastured poultry. “Our poultry goes fast. We sell out quickly,” said Holden. Before Thanksgiving, the farm also sells Thanksgiving turkeys that get bought up just as fast.

Adding to the animal crew on the farm, Holden’s German shorthaired pointer just had a litter of puppies. They are now 5 weeks old and almost ready to go off to their new families. “We had a wait list for them before they were even born. They’re all going to wonderful families,” said Holden.

Along with eggs, poultry and turkeys, the farm sells raspberries and asparagus. In a few weeks, Holden and family will invite community members to the farm for a “you-pick” raspberry sale.

Until then, the family will keep working on the farm, caring for their animals and growing a variety of other fruits and vegetables for themselves in their family garden. “It’s something that we enjoy and our children enjoy,” said Holden. “We are all a part of it. It’s been great.”