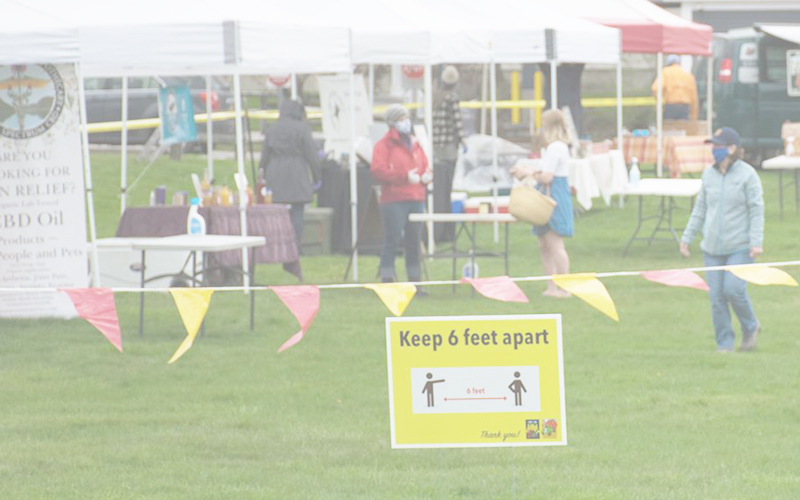 The Waitsfield Farmers’ Market is a staple event of summer in The Valley. The market opened during the COVID-19 outbreak and is continuing to serve the community, but with new restrictions and regulations. Food can not be consumed on site, masks are required, signs discourage lingering and people are encouraged to stay 6 feet apart. Contactless payment methods, like ordering online and prepaying are also a new addition to the market. Flags going through the middle of the market splits the field, creating two lanes, allowing traffic to flow one way. Vendors have also changed their way of communicating with customers and selling products. What has this been like for the vendors? Does it feel the same as before? The Valley Reporter spoke with two vendors who explained how they have dealt with the changes.

Lisa and Micheal Davis own Sweet Doe Dairy, a gelato company. They sell gelato made with goat’s milk from their farm in Chelsea, Vermont. Lisa sells her gelato at the farmers’ market and says that the new rules forced her to evolve. “In my case, it meant relying more on prepackaging and serving scoops of gelato with lids on them to go, since consumption of food or drink at the market is not allowed.  That’s an added cost to us, but a small price to pay for safety. Other adjustments were minor, like accepting forms of payment that minimize the need for physical contact and more frequent use of sanitizer in between transactions,” said Lisa Davis.

Mimi Butterheim, president of Mad River Distillers, has been running the distillery’s booth this year. She says it wasn’t hard to transition to the new rules. “We already had contactless technology with our Square system for payment and it took just a little bit of legwork to get the online ordering up and going, but honestly I think that’s sort of a foreign concept for a farmers’ market.”

Both vendors also agreed that the tone of the market has changed. In past years there was music, dancing, kids running around, food to enjoy on site. Now, all of those things have vanished behind the necessary protection of masks and social distancing.

“Well, it’s less social than it used to be. It’s not a place where people can come and hangout and eat lunch. A lot of our market in Waitsfield was centered around listening to music, socializing with your neighbors and eating breakfast and lunch, or both, and that’s not really a thing anymore. It’s still a nice vibe and it’s getting better every week. Last week we had music. It’s not the same social atmosphere that it used to be,” said Butterheim.

Davis also says the lack of the social component of the market has changed the way it feels. “The market is typically a gathering place where people come to shop, sit, eat and socialize. This year, it’s definitely a grab and go kind of mentality. The vibe is different, for sure, but I’m grateful that farmers’ markets in our state have been allowed to operate under the circumstances, even if it’s a slightly different experience,” said Davis.