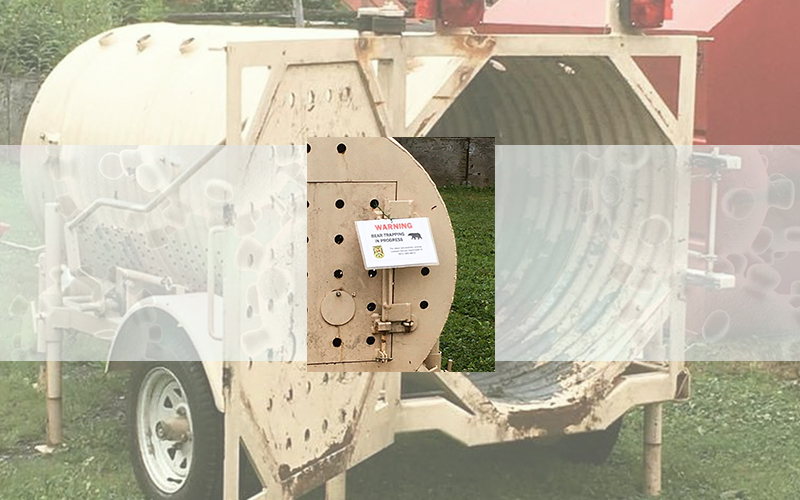 Cold Hollow Cider Mill, Waterbury Center, has seen some recent bear activity around their dumpsters. The Valley Reporter talked with Paul Brown, the owner of Cold Hollow, and game warden Sgt. Chad Barrett to learn more about what happened.

Recently, Brown had found himself picking up trash around the dumpsters that had been rummaged through. They seemed to have been violated by an animal. “He’d (the animal) been getting in our dumpster and we’d had a heck of a time trying to keep him out,” said Brown. The staff at Cold Hollow tried to keep the animal out by putting mesh wiring on top of the plastic lids of the dumpster. However, their efforts were not successful for the animal still would get into the dumpster.

On July 14, Vermont game warden, Sgt. Barrett, came and set up a bear trap behind the dumpster. The trap was baited with donuts slathered in bacon grease. The next morning, a bear was found in the trap. It was smaller than expected, about 200 pounds, but it was still a decent size and would’ve been able to get into the dumpster. Unfortunately, the bear had to be destroyed.

“The reason the trap was set there in the first place was because we were getting multiple reports of aggressive bears in the area protecting the dumpsters, trying to protect their food source,” said Sgt. Barrett. For Brown, the problem was solved, or so he thought.

Sgt. Barrett thinks that the bear was having a harder time getting into the Cold Hollow dumpsters because of their efforts to secure it, adding 4-by-4 posts, ratchet straps and metal grating on the top. “Think the bear realized, ‘Well I still smell food, I’m going to go somewhere else and hit the neighbors' dumpsters’ which were not as secured,” said Sgt. Barrett.

Sure enough, the next morning a 300-pound bear was found in the cage. When there are aggressive bears in an area, Sgt. Barrett says that human safety must be his top priority, so this bear was also destroyed.