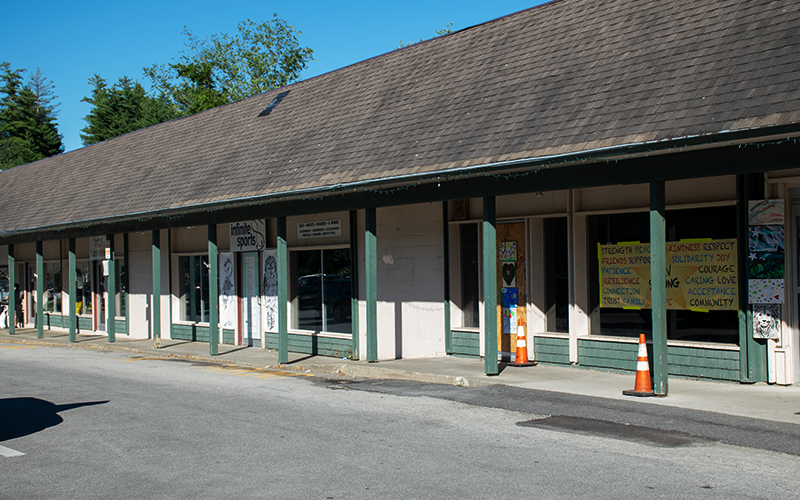 Thanks to extensive insurance delays, clean up of the final three shops at the Village Square that suffered extensive damage during a January fire, is finally underway according to property manager Marion Baraw.

There’s good news and bad news about what is next for the shopping center. The good news is that Baraw has sent a lease to a tenant who wants to open a pharmacy where Kinney Drugs had been located, next to Mehuron’s.

The bad news is that Seth Thomas, owner of Infinite Sports, has opted not to renew his lease according to Baraw. She said he was concerned that ski resorts wouldn’t open this season and was reluctant to invest in inventory he may not be able to sell.

The January fire that damaged the businesses was an electrical fire that started at Infinite Sports.  Kinney Drugs was one of the four businesses that were closed due to the fire. That fire caused extensive smoke damage and also toxic ash from melted ski equipment in the ski shop, Shades of Winter yarn shop, Kinney Drugs and Mehuron’s Supermarket. Canteen Creemee had minimal smoke damage and was able to reopen this spring.

Kinney Drugs corporate headquarters announced this spring that it would not reopen the Waitsfield store and has been delivering prescriptions to Valley residents since January.

After extensive cleaning and remodeling, Mehuron’s was able to reopen on March 7 shortly before Governor Phil Scott ordered Vermonters to stay home due to the COVID-19 pandemic.

The pandemic slowed all the processes necessary for Baraw to work her way through insurance companies and get the spaces cleaned up and rebuilt. Extensive testing was needed to make sure that the toxic ash was properly removed.

The work on the three spaces is being done by CMD (Construction Management Direct), a sister company to Puro-Clean that did the initial cleanup.  Clean up and reconstruction were delayed by COVID-19 as well.

Baraw said that the lease for the new independent pharmacy would begin as soon as the space is available.