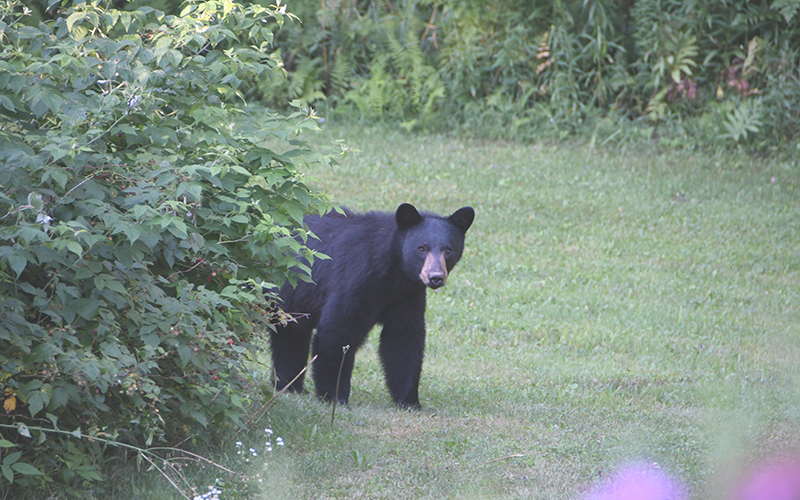 Valley bears are bolder than ever this year. Not only are bears popping up in backyards and digging through compost bins, but they’re pushing the limits of human contact, breaking into sheds and rummaging through unlocked cars. As one Front Porch Forum user, Cathy Leonard from Waitsfield, wrote: “The bear opened the door, rummaged around inside, found some chocolate (unwrapped and ate it) and gnawed on a hand sanitizer bottle. This is one smart bear.” She also added, “We are locking our cars now!”

The Valley Reporter interviewed local composting savant Richard Czaplinski, Warren, to find out if faulty composting practices are playing a roll in attracting black bears to people’s homes, and to find out what composters can do about it.

Czaplinski, an environmentalist with a lifetime of composting experience, explained how compost piles attract bears. “Bears have really sensitive noses,” said Czaplinski. “If you leave any scent, the bears are going to look for it, and they’re going to dig around until they find it, and make a mess.”

Two big bear-baiting composting mistakes that people make, according to Czaplinski, are one, throwing kitchen scraps right on top of the compost pile instead of burying them and two, putting fish and meat scraps in the compost. “Keep out meat scraps,” said Czaplinski. “You can bury them well, but even then, if there’s any scent, the bears will smell it and dig it out.”

While some people put up electric fences, buy special bear-proof bins or even put their dogs outside for the night to keep bears away from their compost piles, Czaplinski maintains that the best way to keep bears away is to compost properly, which prevents the strong smell of decomposing food from attracting bears.

As Vermont wildlife biologist and black bear researcher Forrest Hammond explained, this has been a difficult natural food year for bears. “This year we had a short winter and an early spring, followed by a delayed green up,” said Hammond. “You’ll remember it just stayed cool. We lost our snow and it stayed cool for a long time before we got a green up. And then we just didn’t get any rain.”

An early spring with no rain means many scavenging bears with no food. “Where the bears would normally be feeding on vegetation in the late spring and early summer, the vegetation dried out. It just wasn’t palatable for the bears,” said Hammond. “So the bears are pretty desperate, especially the females with little cubs. Because they’re just not going to survive if they don’t get much food.”

Additionally, the pandemic has provided a unique feeding opportunity for bears. “With the pandemic, there are more people coming to the state and staying here,” said Hammond. “They are less familiar with living with bears.” That is, many second-home owners are just now learning the bear lessons that generational Vermonters have known for years: Learn to compost correctly. Don’t put bones or seafood into the compost. Make sure garbage is secure. Take garbage to the transfer station as often as possible, or keep it inside a locked shed. Take down bird feeders.

“If you’re attracting birds, you’re eventually going to attract bears that might not have smelled your compost, but once they’re in your yard, they’ll look around for anything else they can get,” said Hammond.

A final culprit in this year’s bear sighting surge may be related to the Vermont compost law put into effect on July 1 that prohibits Vermonters from putting food scraps in the trash. With this law in place, more Vermonters are going through the learning curve of proper composting. For instance, one thing new composters are learning is that while they can legally put meat scraps in the trash, putting them in the trash or compost might attract bears. Thus, the best thing to do is to freeze them and take them directly to the transfer station.

But until everyone learns the secret to living peacefully with bears, “All these things make it more likely that bears will be interacting with people,” said Hammond.