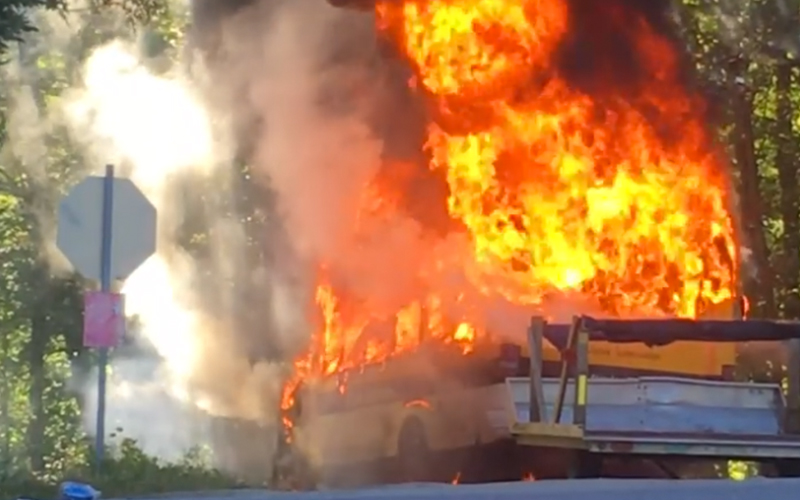 On Saturday morning, September 5, Mike Jengo was driving his party bus called the Alpine Limo to Sugarbush to drop off a few mountain bikers, some of his first clients in months. That’s when he noticed smoke billowing out from under the hood. He pulled over and got the bikers off the bus and then suddenly, it was engulfed in flames.

“It was a freak electrical short of some sort,” said Jengo. “Everything is so tucked in under the hood there; there’s so many wires, that we couldn’t really pinpoint where the flames were coming out.”

Jengo’s friend Brian Deagle, or as Jengo calls him, “Diggity,” was on board and emptied a fire extinguisher into the hood. “But within a matter of minutes it was fully flamed up,” said Jengo.

The Alpine Limo has been Jengo’s source of livelihood and his passion project since he started the company in 2011. As a super social, Valley-loving, jack of all trades mechanic and ski industry man, the Alpine Limo business was the perfect storm of a career fo

“It has given me lifelong friends,” said Jengo, who befriends his riders as he shuttles them off to wedding venues, beer tours, mountain bike tours and ski trips. In fact, Jengo and his limo are so popular that people book him every single year, sometimes multiple times a year.

“People just keep coming back. And now that we have this rapport that we’ve built, I’ll go in and eat dinner with folks or I’ll go into the concert,” said Jengo. “The amount of appreciation I get from folks is just through the roof compared to other jobs I’ve done. They take me to dinner and want to hang out after!”

One thing that made the loss of Jengo’s limo particularly hard was that he had just spent months renovating the bus, putting in new flooring, and decking out the interior. “I put all that effort in. It was crushing,” said Jengo.

Still, despite Jengo’s loss, he is grateful for the support he’s received from friends, family and the community. One of Jengo’s friends created a GoFundMe called “Help Mike Jengo Bring Back Alpine Limo” to help him get his business back on wheels. The site has already raised $14,000.

Regarding help from the community after the accident, Jengo said, “The Waitsfield Fire Department was so professional and awesome when they showed up. Claire from Hap’s showed up with the wrecker and cleaned everything. She was so awesome. Those people are heroes. I’m so grateful to be in the same community as them. It’s unbelievable.”