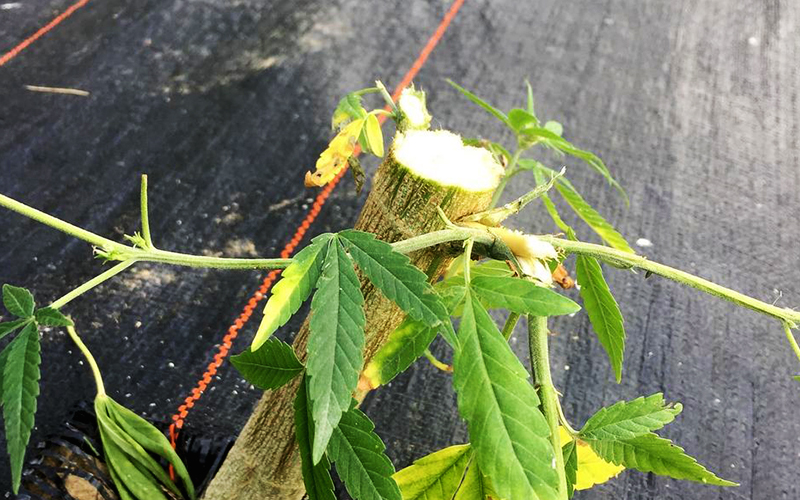 While Jenna Rossbach was asleep at her home (and business) on Pony Farm Road, thieves -– in what must have been a premeditated plan -– used heavy loppers to cut down her 50 hemp plants and transport 500 pounds of hemp away from her Fancy Plants Greenhouse between Sunday night, September 6, and Monday morning, September 7.

The hemp plants at her Moretown business were not yet mature and Rossbach had placed signs by her field of hemp plants letting people know that it was not marijuana. She also had a camera in place, but that camera covered the front of the field and not the back where the thieves accessed the plants.

“That’s a lot of plant material to take that away. It must have been planned. That’s at least a couple of loads with a pickup truck or large van or a single dump truck. It’s a lot of material to get out of there in one go. The stems are 2 to 3 inches across,” Rossbach said.

Rossbach planted hemp last year as well and did have someone pull a couple of plants out by the roots last year. This year’s crop of 50 plants was smaller than the 75 plants she grew last year. The Vermont Agency of Agriculture, Food and Markets (VAAFM) estimated that 500 pounds of hemp were taken.

The irony of the fact that the thieves took immature plants is not lost on Rossbach.

“This was an unfinished crop that has no value. The plants weren’t finished. They had about another month to go,” she said, noting that she likes to wait for the first frost which improves the harvest.

“The plants were not ripe. They were looking good. They were going to be a good harvest and I wanted to get as much weight into the flowers. Longer you wait, the heavier they get,” she said.

Rossbach grows hemp to process it for herself and her dog and to sell the flowers to others. Last year she grew about 20 pounds which can be sold for $200 to $500 per pound based on how it is trimmed and dried.

Rossbach said that while she was upset about the loss, she found the fact that someone must have been planning and watching her business to be most disturbing. Financially, she said, she has a few hundred dollars into seeds and fertilizer and potting soil, plus the cost of her hemp license.

She said she grows it because she likes the link between its medicinal uses and because she supports the fact that hemp can be grown in Vermont.

The Vermont State Police did come and investigate and gave her a case number which she can use if she reports the loss to her insurance.

“I’m looking into that, but I don’t necessarily want the plants back because they weren’t ripe. I can’t uncut them,” she said.

Rossbach said she thinks the detour on Pony Farm Road caused by the Route 100B bridge over the Mad River at the south end of Moretown could have had something to do with the theft.

“I think the detour on Pony Farm Road is a factor. There’s been so much traffic on the road, so more people have driven by, but also I’ve become desensitized to all the cars and trucks on the road so I slept through what happened. It’s a bad feeling that I was here sleeping and someone was here on my property taking things,” she said.