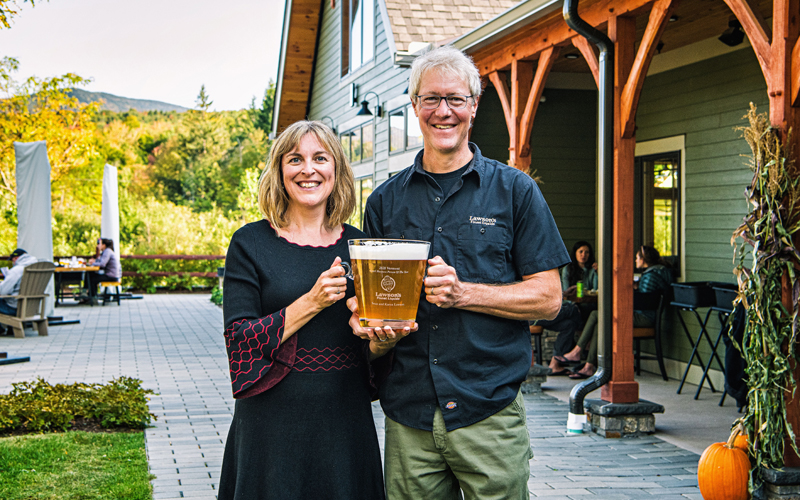 The owners of Lawson's Finest Liquids were presented the 2020 Vermont Small Business Person of the Year award on September 21 at their Waitsfield brewery.

The award was originally announced in early March before the COVID-19 pandemic was in full swing. Hence the delay in the award being given.

Owners Sean and Karen Lawson are being recognized by the U.S. Small Business Administration for the brewery's employment growth, success in the marketplace, company expansion and community involvement.

Lawson's Finest Liquids started in 2008 in a small building resembling a sugarhouse next to the Lawson's home in Warren. Today the brewery grounds consist of three buildings occupying more than 25,000 square feet, housing a 34-barrel brewery, taproom, retail store, warehouse and distribution center. It has also grown from a husband and wife team to having 51 employees.

“It is such an honor to be recognized by the SBA! When we started Lawson’s Finest in 2008, we were driven to incorporate our core values of excellence, community, fun, authenticity and innovation into everything we do. Launching our Waitsfield brewery in 2018 enabled us to create a destination for guests, as well as support the economic vitality of the Mad River Valley community,” said Karen Lawson. To fund the expansion, the Lawsons obtained two 504 SBA loans.

“Working with the Vermont Small Business Development Center for our initial brewery expansion in 2011 and for our major Waitsfield capital expansion in 2017 was truly invaluable,” said Sean Lawson.

Today the brewery distributes throughout the Northeast and although it does not regularly export, Lawson’s Finest ships to Canada for special festivals and events.

Each year Vermont small businesses compete for a variety of awards in addition to Small Business Person of the Year. In 2020, the SBA is awarding seven businesses in other Vermont categories.