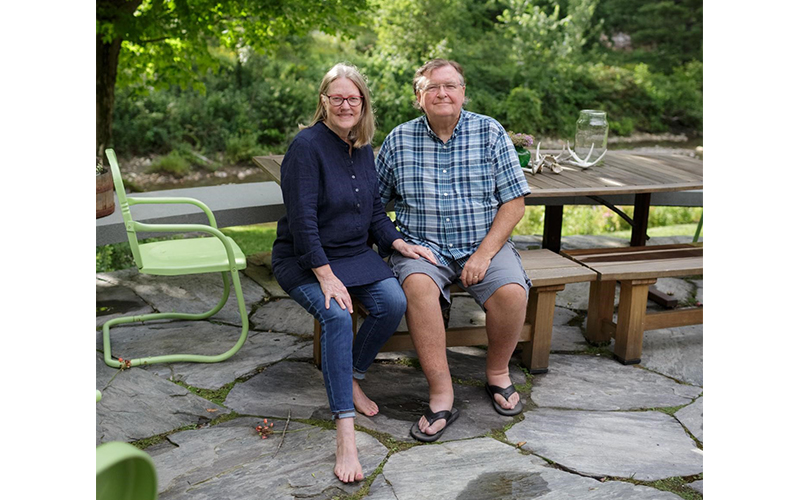 Almost 20 years ago, Jean and Jack Sharry’s son went to summer camp in Vermont. At the end of his stay, his parents visited and they were hooked on the outdoor spaces, community and natural beauty. Six weeks later, they bought a house next to the hairpin, tree-lined curves of Mad River Valley and across from the covered bridge in Warren.

Until their three children were out of high school, the couple brought the family to Vermont for every Christmas and Thanksgiving. Both were able to work remotely for extended periods and continued to increase their time at their second home. By the fifth summer of owning their home, they were staying in Vermont the entire summer.

This year, Jean and Jack, whose children no longer live at home, arrived in March to their Warren home, intending to only stay a week. That plan quickly turned into a five-month stay that has yet to end. “That’s when everything happened,” said Jean, in late summer after five months of sheltering in Vermont. “And we feel so fortunate to have this slice of heaven. We will definitely stay here through October or November. We’ll just spend more time here in general. We love The Valley, the people and it’s just safer.”

Since they first moved to Vermont in 2001, the two have been active members of the Warren community and long involved in an effort to recruit more young professionals and families to Vermont. But, in order to be successful, Jack says, Vermont communities, “need to embrace and welcome second-home owners. They take us for granted. People want to know how to connect. There’s a level of fear here due to the pandemic, but second-home owners all came up here in March. They’re just as safe as Vermonters now. We have to be more embracing of these new folks and include them in the community.”

Editor’s Note:  This story is one of several produced as part of The Vermont Futures Project (VFP). VPR partnered with the Center for Research on Vermont and the Office of Engagement at the University of Vermont on a survey of people who chose to shelter in place in Vermont during the COVID pandemic. The survey results suggest an opportunity for the state to attract a wave of new residents as Americans consider relocation for COVID-related reasons and reimagine their post-pandemic work and living arrangements. “Live in Vermont” survey results, along with profiles of five families, including Warren residents Jack and Jean Sharry, that have relocated to Vermont from the Vermont Futures Project’s “Live Where You Love” initiative can be found on the Vermont Futures website.

“As Vermont has struggled for several decades to grow its population, the current pandemic could be an opportunity to welcome new residents to Vermont. Our rural, open green spaces coupled with a desire for a great quality of life may be what many urban dwellers are seeking. We see this as a positive trend for Vermont’s economic future,” said Lori Smith, executive director of the Vermont Futures Project.

Highlights of the results include:

Most of the respondents had a previous connection to Vermont, either through birth, a prior stay, owning a second home, or family and friends living here. The survey suggests that a number of second-home owners are considering making Vermont their primary residence. Forty-four percent of respondents identified owning a second home here as their connection to Vermont.