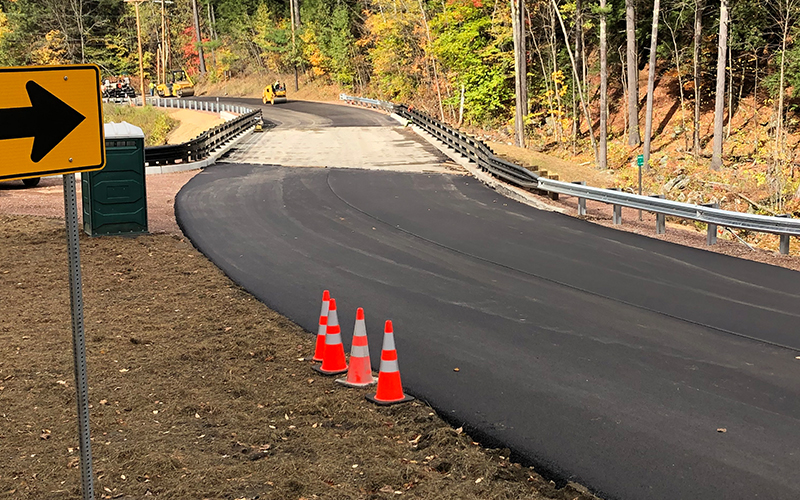 The project manager for the Moretown Route 100B bridge replacement expects to complete the project and reopen the bridge over the Mad River this week on Friday, October 9.

Brian Richardson, project manager for St Onge Construction was interviewed on October 5 and reported that guardrails are going up this week and the final paving will begin after that.

The terms of the contract provide that the bridge must be reopened by October 16. The contract also provides a bonus if the project is completed early.

Richardson said that his teams had put in a lot of overtime to get the project done on time and said that the project proceeded as planned without any issues. He said throughout the project that there’d been as few as five and as many as 15-20 people working on the site.

St Onge is located in Montgomery and many employees have been communting an hour and a half to get to the job.

Route 100B at the south end of Moretown was closed on August 17 for a long-awaited replacement of the 1928 bridge. Site work began in early August. The bridge has been one-way with a traffic light for three years.

Once the bridge reopens there will be another week or two of final work and one-way traffic will be in effect.

The $2.5 million project was a hybrid of precast and onsite construction.

The new bridge is a single-span bridge that is 10-feet long and 30-feet wide. It will have a 100-foot length with a 30-degree skew that meets hydraulic standards. The rail-to-rail width of 30 feet will also meet the current design standards and accommodate bicycle and pedestrian traffic. The new superstructure will consist of five tangent steel plate girders with a bare concrete deck. The substructure will be founded on bedrock.

Moretown and Waitsfield have received funds from VTrans to offset wear and tear on the local town dirt roads during the closure. Stevens Brook runs through both Duxbury and Moretown.

The 92-year-old bridge was in rough shape with heavily damaged curbs and was losing connections with the ledge/bedrock it’s on. The newly-proposed structure has a concrete deck on steel girders, spread footings on ledge and is longer, wider and on a slightly different alignment.  The new bridge is higher which will give the Mad River more room during high water events. The existing bridge incurred significant damage during Tropical Storm Irene in 2011.