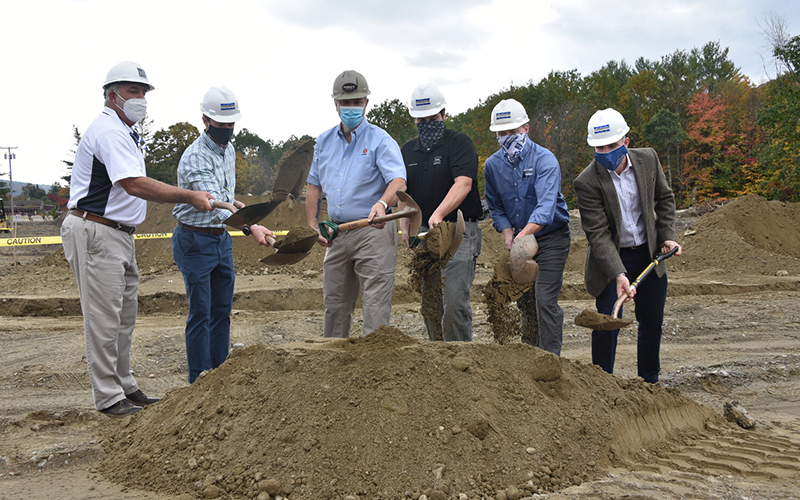 After a long road of design and permitting and COVID-19-related delays, Parro’s Gun Shop, Waterbury, officially kicked off construction on its new shooting range, training center and retail store this week.

In a short ceremony on the 2-acre site along U.S. Route 2 just west of Waterbury Village, owner Henry Parro along with his son, Ethan Parro, and representatives of the project’s finance, design and construction team picked up shovels for the groundbreaking.

Designed by Waterbury architect Joe Greene of Joseph Architects, the approximately 20,000-square-foot facility will be Vermont’s first commercial indoor shooting range. Along with space for training and practice, the retail operation that Parro’s currently runs nearby will move inside the new space as well.

“This new venture will create approximately 20 new jobs in the Waterbury area and provide the much-needed training for first-time buyers,” Henry Parro said.

Connor Contracting Inc. from Berlin is the construction company on the project that Parro estimated will cost $3-4 million.

Parro said his son’s role and involvement marks a fourth generation in their family to be doing business on the site which was part of a farm that stretched along the northern bank of the Winooski River more than a century ago.

When he looked at U. S. Census records for 1940, Parro said, his grandmother was listed as running a thrift shop on the site, which she likely opened after his grandfather died in 1936. An avid collector of dolls, she later ran a doll museum with more than 2,000 dolls, he recalled.

Later the family businesses on the property run by his grandmother and father included an antique shop, a restaurant and a creemee stand before Parro opened his gun shop, he said.

Once the new range and retail store are open, Parro said he will be involved but he’s looking forward to passing the torch to Ethan who went to Vermont Technical College for business management. “I’m turning it over to him,” Parro said.

Construction will take place over the winter with a spring opening anticipated.

Scagliotti is the editor of Waterbury Roundabout.