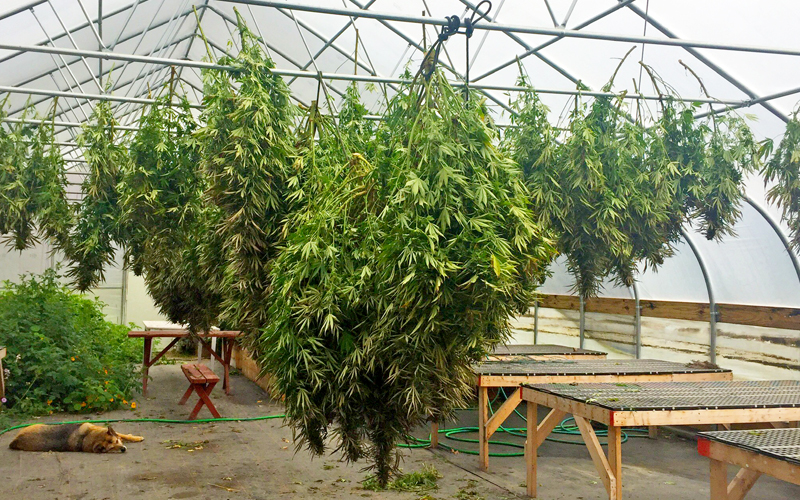 After thieves made off with Moretown hemp grower Jenna Rossbach’s entire crop of hemp this year, the resulting media attention led to a southern Vermont hemp grower to reach out and offer her 50 of his plants.

Rossbach’s immature hemp plants were stolen in the night early in September. At the time, Rossbach noted that the immature plants had little value because they’d been cut too early.

“This was an unfinished crop that has no value. The plants weren’t finished. They had about another month to go,” she said told The Valley Reporter at the time.

Fast forward to last week when Rossbach, owner of Fancy Plants Greenhouse, had her crop replaced by Sam Markowsky. Markowsky is a hemp grower who operates in Florence. After he heard about the theft, he tracked her down a month and a half ago and offered to replace her entire crop.

When she went down to visit his operation, it was still too early to harvest, but she got a great look at his operation which he runs with five other partners a business they call Terps, short for the terpins found in hemp.

“Each of the partners brings something different to the table. Sam has an excavating company as well and has experience operating heavy equipment, she said, noting that Florence is located south of Brandon and the banana belt south of the Champlain basin.

She was awed by the scale of the operation and watching Markowsky and his co-worker mechanically harvesting the hemp plants with modified bean pickers that are driven through the hemp fields, sucking up all the plant matter, leaves and all and leaving behind skeletons of the plants.

“They created this entire system themselves because the technology doesn’t yet exist to process hemp on this scale. The other partners are mad scientists and engineers who put this together,” Rossbach said.

The plant matter goes into a grain elevator and into a masher and then back into a drying area where it moves back and forth on a conveyor belt and the terpins are extracted before being added back.

Beyond the mechanical harvesting, Markowsky and his crew are selecting some of the best flowers that are harvested and rolled into joints.

“They are picking the best top buds and hand trimming those and drying them in their lab building. Their building is an old building from the marble industry. It’s old, decrepit and has the original carpet and drapes and its room after room of drying hemp flowers with fireplaces in every room. The processing looks a lot like Willie Wonka,” she said.

On October 2, when Rossbach returned with her boyfriend and his dump truck to pick up the plants, she was only able to fit 16 of the plants in the truck because they were so big!

She’s gotten the plants hung in her greenhouse and is slowly working her way through hand trimming and processing those plants. Because the donated plants are so much bigger than hers were, she expects that her crop will be somewhere between 10 to 20 pounds which is what she would have gotten, had her crop not been stolen.

She had great praise for Markowsky and the crew at Terp who she said work hard to help their communities with free CBD products offered to their community in the first six weeks of the COVID closure, offering products to people new to CBD and to those who were regular users who had lost their jobs and couldn’t afford to purchase them.

Rossbach said that Markowsky was not the only hemp grower who offered her 50 plants. Such offers came from all over the state and a couple came from Oregon and California.

“I feel incredibly supported from the Mad River Valley community as well as the hemp-growing community. It’s a terrible feeling when you get robbed. When you know that your neighbors and fellow growers have your back, that’s awesome,” she said.