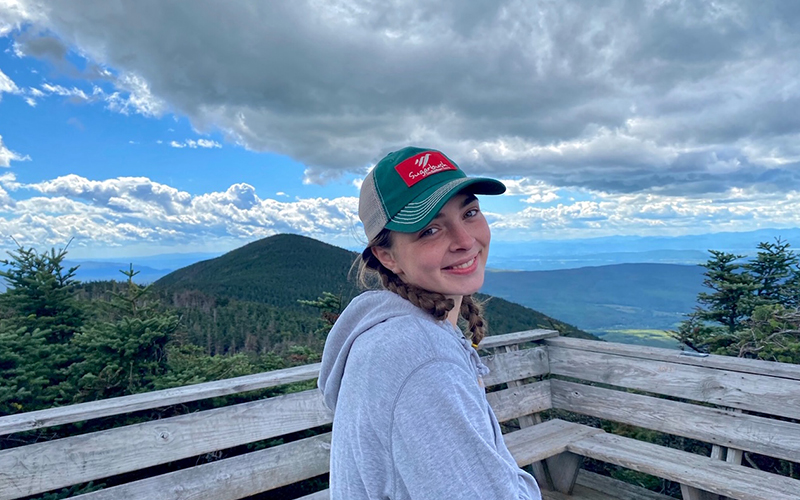 Last February, Ingrid Lackey-Howell, a senior at Harwood Union High School, started interning as a correspondent for The Valley Reporter. Now she has been promoted to intern reporter, a position in which she will continue to tackle a variety of topics, ranging from local politics to feature writing. As she moves onto her new position, The Valley Reporter asked Lackey-Howell to reflect on what she has learned thus far.

Clearly six months of weekly contribution to the paper has taught Lackey-Howell what it takes to be a reporter. “The hardest part of my internship has been getting in contact with people I want to interview,” Lackey-Howell said. “At first it was a little intimidating talking to someone I don’t know, about a topic I usually don’t know anything about! Although it has gotten easier, I still have butterflies in my stomach before an interview.”

Despite the challenges, Lackey-Howell appreciates all that she has learned in the last six months. “The best part has been meeting new people and improving my writing skills. I used to feel like 600 words was a crazy amount to write and edit in a few hours. Now I feel like it’s nothing,” she said.

Interning at The Valley Reporter has not only given Lackey-Howell the chance to improve her writing, but it has also let her immerse herself in a variety of unique perspectives. “My favorite story to write was called, Meet Father Matthew,” said Lackey-Howell. “I interviewed a new Catholic priest in The Valley and it was the most fascinating interview I’ve had so far.”

Lackey-Howell explained that the interview was only scheduled to last 30 minutes, but ended up lasting nearly two hours. “I am not religious, personally, so we ended up having a lot of questions for each other. It ended up being a very respectful discussion on what we didn’t understand about our differing views,” she said.

The internship experience has also given Lackey-Howell a new appreciation for local news. “When I was younger I didn’t realize how much was happening in our little Valley! When you read local news, you’re reading the words of people you might know, people who walk by in the grocery store. Reading local news gives you the opportunity to know your Valley on a deeper level,” she said.

As she moves on to her new position, Lackey-Howell will strive to embody the three qualities that she believes make for a good journalist: honesty, empathy and objectivity. In regards honesty, Lackey-Howell said, “I’ve found that if you want to say something or ask a question, you should just do it.” Regarding empathy, Lackey-Howell says that reading someone's emotions makes her a better writer. “It can make it easier to write when you can tap into how someone else is feeling,” she told The Valley Reporter. In terms of objectivity, Lackey-Howell asks, “How can you trust someone’s words if you don’t know if it’s the truth?” She believes that journalists must be impartial. “Being objective is a trait that any good journalist should have. I try to be as objective as I can.”

In addition to her promotion, the college search has been on Lackey-Howell’s mind. She is applying to Smith, Hamilton, UVM and a handful of other schools. Regardless of where she goes, she plans to major in government or political science.

“I want to be a journalist or at least work in the media,” said Lackey-Howell. “When I do go to college I want to write for the school paper or a local paper. I don’t know a lot about the position, but I think it would be interesting to be a war correspondent. Other than that, it’s hard to know!”