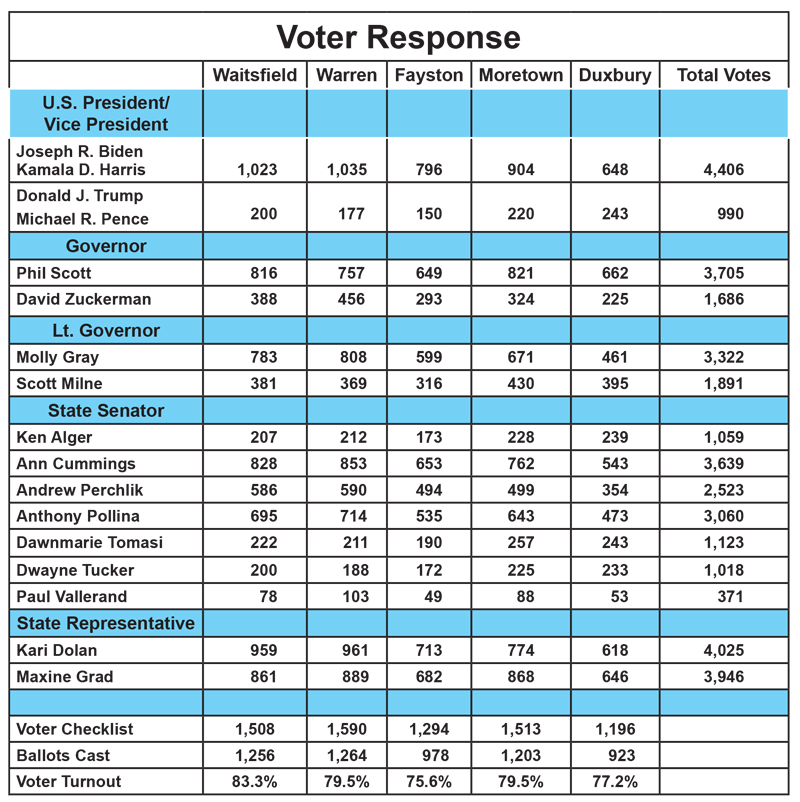 Voter turnout in The Valley ranged from 75.6 to 83.3 percent with election officials reporting high numbers of absentee ballots received in advance and on Election Day this week. According to local town clerks the process went smoothly throughout The Valley with minimal lines and good flow through the polls.

In Fayston, town clerk Patti Lewis said that all who came out were cooperative and polite. She registered three new voters yesterday and praised her poll workers for their help. She said she heard from several voters that having the ballots mailed out to all voters early helped them research candidates and make choices.

Lewis and other town clerks said they had lots of people come in without their ballots for many different reasons including a Fayston voter whose dog chewed up the first ballot.

In Waitsfield, town treasurer and assistant town clerk Sandy Gallup said that so many people came to the polls without their ballot that they almost ran out of the affidavits that people had to sign if they came without their mailed in ballot.

In Warren, town clerk Reta Goss was very happy with how well November 3 went. Warren voters returned 1,003 ballots (out of 1,270) early this year. She had high praise for the Vermont Secretary of State’s office in how balloting and the elections were handled this year.

“The secretary of state did an excellent job,” she said.

Duxbury town clerk Maureen Harvey said voting went well with 681 ballots returned before November 3 and a total of 822 absentee ballots returned. Holding the election in the town office instead of at Crossett Brook Middle School also worked well, she said.

“It was well worth freezing to keep people safe and people were wonderful. They were so thankful that we were outside and keeping them safe,” said Moretown town clerk Cherilyn Brown. As with the primary, Moretown conducted drive-by voting, but rather than August weather, this week’s voting featured an early season snowstorm.

The two incumbent state representatives for the Washington-7 district, Maxine Grad and Kari Dolan received a total of 4,025 and 3,946 votes respectively from voters in the five-town district that includes Waitsfield, Warren, Fayston, Moretown and Duxbury.