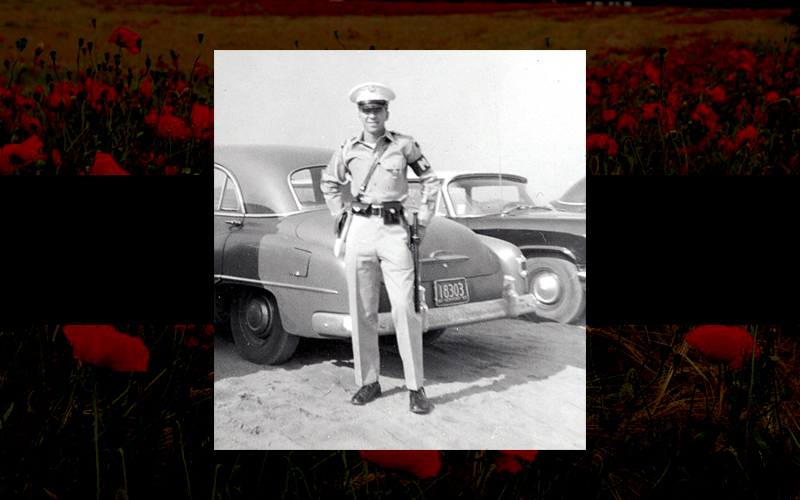 Leo Laferriere, Waitsfield, was drafted right after he graduated from college in June, 1956. He went to basic training at Fort Hood in Texas where the summer heat was pretty tough on the northerners.

After basic training, to his surprise, he was offered a choice of what he wanted to do, infantry, signal corps and several other options.

“I settled on military police because I thought it would provide some varying experiences,” he said.

“I was amazed that we were given a choice. My understanding of the military is that you did what you were told,” he added.

He was sent to Fort Gordon, Georgia, to a military police training center for eight weeks of training. It was there he encountered racism for the first time.

“We had one person in our training group who was very anti-Black and I’d never experienced anything like that. I was surprised to hear him talking,” he said.

Laferriere was on a short leave in some southern city, maybe Atlanta, he said, walking behind this man when some Black people came walking towards them on the sidewalk.

“He was so biased that he crossed the street to avoid walking by these people and I thought, what a burden it must be to always have to watch for someone so that you could avoid them,” he said.

Laferriere, who is a Barre native, was then sent to Camp Kilmer, New Jersey, where he worked processing Hungarian refugees, working border control on both sides of the public highway that ran through the camp. His unit was a temporary service unit that was assigned where needed in the northeastern U.S.

One assignment was at West Point where they parked cars and escorted high-ranking officers. While at West Point he was also fortunate to be stationed in front of the hall where graduation took place so he could watch the cadets graduating.

“They graduated in order of performance in the class with top person being first, and a lot of applause for top cadet. Then as other cadets came, the applause diminished. But then it started to rise again and the last guy got most applause of all before they threw their hats in the air. It was a great sight to see,” he said.

He and his crew spent most of that summer on Cape Cod service as support for the Army National Guard and other training units who came to Cape Wellfleet to be trained in using anti-aircraft guns.

“We’d sometimes go into Provincetown and Hyannis in uniform on weekends and be a show of force for the guardsmen and Army reservists who were getting out of hand,” he said.

In the fall they were back at Fort Dix again and in the spring at West Point for graduation ceremonies. After six to seven weeks back on the Cape he was discharged.

Laferriere, who graduated with a forestry degree from the New York state forestry program at Syracuse, never worked in law enforcement again after his service. When he returned to Vermont he began working for the state as a forester.

While in the service he made lifelong friends, including one who was his best man when he married his wife Liz whom he’d met in Maine on the Fourth of July. When he met Liz, it was not love at first sight, but an absolute sense that “this person was going to be good for me and hopefully I’d be good for her. That was absolutely my first impression,” he said.

They’ve been married for 52 years and he lost his friend six years ago.

Because his service was stateside during peace time, Laferriere says sometimes he doesn’t really feel like a veteran.

“It was an obligation which I was happy to do, but I don’t feel I’m a vet like the other GIs who traveled out of the country and fought in the wars. When an occasion comes up where vets are asked to stand, I stand because I served, but I don’t feel deserving,” he said.