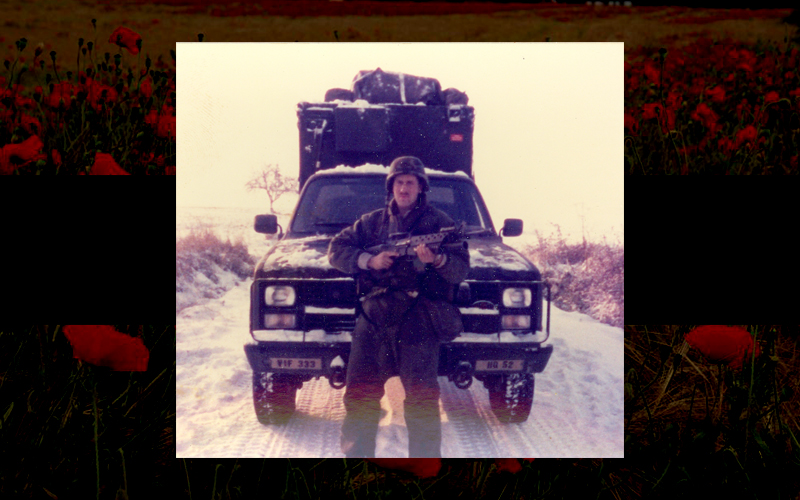 In 1984, at the age of 18, Doug Barnes joined the Army. He went to high school in Columbia, Maryland, where he played sports and got “not so great grades.I figured I could do some growing up and get some money for college under the Army college fund and mature a little bit and see the world a little bit,” said Barnes.

In January1984, Barnes had basic training at Fort McClellan, Alabama. “In training, one day you’re 40 guys together for the past two months and the next day you’re all going in 40 different directions and you say your goodbyes, some you hold on to and some you don’t,” Barnes recalled. He left basic training in March.

He left for Germany in the fall of that year and was stationed there for about two years. Because Barnes’ father worked for the National Security Agency, the family had moved around during his childhood. When he was very young Barnes lived in Germany and Denmark. “I enjoy traveling. I never felt scared or intimidated by that. I always looked at it like an adventure, as I did going to Germany at that time in my life. I was really looking forward to it.”

Barnes said that he had a roommate in Germany that he still keeps in touch with who “I talked to today, and he is a high school principal who got a doctorate degree,” he said with a chuckle.

During his two years in Germany, Barnes noticed things he admired about the culture. “They had seat belt laws and they cared about air pollution. There were things like that at the time. They literally had laws about seat belts and at the time in the states we didn’t, and there were plenty of people who would refuse to wear their seat belt. Just little things like that, seeing how they cared about their people and the planet,” said Barnes. It should be noted that seat belts were required in cars in the U.S. at the time, but there were no federal laws stating that you had to wear one.

After his deployment in Germany, Barnes was stationed at Fort Eustis, Virginia, where he worked as a high frequency radio operator. In 1988, he started a job in Rockville, Maryland, and then, while working, went to college, first majoring in criminal justice and then sociology. Now Barnes is 55. He and his wife Lynn have lived in Vermont since 2006. They first came to The Valley on vacation, but then fell in love with the area. Barnes bartends at Mad River Glen and does property management.

When Barnes was asked about a memory or take away from his time in the Army he said, “What I take away is this: People think that people go into the service and they may have political ideologies, but really, at the end of the day, you’re in because you’re standing next to that guy you care about. Today we have people who have been in combat for almost two decades. We’ve been in conflicts for three presidents and people are like ‘why do those guys stay in?’ and they stay in because they care about their friends who are in there, and that’s a strong bond.”