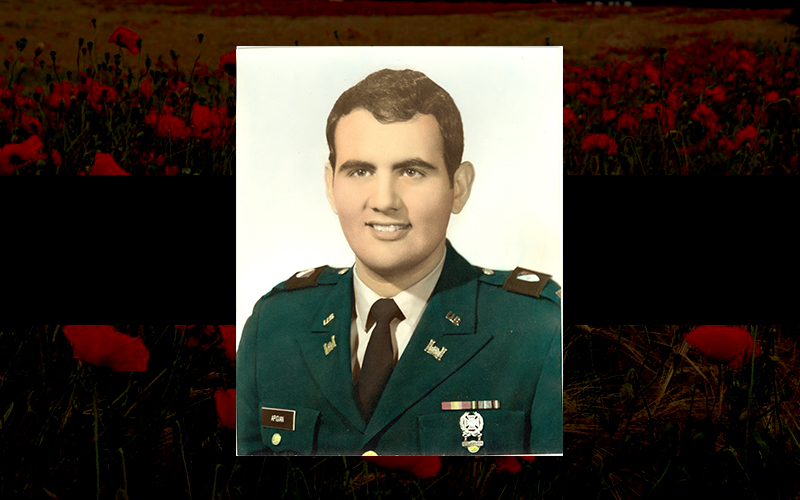 “I don’t think being in the military is the only way that you can serve,” said Manny Apigian, Waitsfield. “I think everyone in a republic has a responsibility to serve in some fashion. Just look around The Valley and see the volunteer work that people do. Whether it’s a firefighter or an ambulance driver. Whether it’s someone on a board or a commission. All of these people are serving in their own way. I think that is the responsibility of a citizen.”

Apigian served in the Army Corps of Engineers from 1969 to 1971. His path towards military service started when he attended Norwich University. “At the time that I was there, virtually everyone went to the military when they graduated,” said Apigian.

The same week he graduated from college in 1968, Apigian was commissioned into the Army. However, he didn’t start active duty until a year later, after he’d gained some work experience with General Electric in Massachusetts. “My wife and I reported to our first duty station in June of 1969,” said Apigian.

“I say my wife and I because, I think for any veteran who is married, their husband or their wife is an important part of that experience,” said Apigian. “Without that person supporting you, it can be very difficult.” Manny and his wife, Pat Apigian, grew up in North Redding, Massachusetts.

The couple went to Manny’s first two duty stations together, first in Virginia and then Texas, where they played as teammates in a game called life. He was working a lot and Pat took care of everything else that had to be done.

In May1970, Apigian received orders to go to Korea. The Korean War was over; it ended in 1952. “We still have troops on the demilitarized zone that separates North and South Korea,” said Apigian, who was in South Korea for nearly a year.

For Apigian, being stationed in Korea meant sacrificing family life. When he moved to Korea, his wife moved back to the states. “She was three months pregnant at the time,” he said.

Their first son was born while he was away. “He was 7 months old when I first met him,” said Apigian. “And to tell you how things have changed in the last 50 years, I was notified by the Red Cross that I had a son two days after he was born. The notice came by telegram.”

Living in Korea was a novel experience for Apigian. “I had never traveled that far out of New England. It was quite a cultural change,” he said. “My duty station was in a small rural village. It was unlike anything I’d ever been exposed to.”

The mission of a float bridge company is to bridge rivers by inflating large 40-by-12-foot pontoons. “You can bridge rivers as small as the Mad River and as large as the Potomac, just by adding additional sections,” said Apigian.

Reflecting on his time in the military, Apigian stated he had no regrets. “I don’t think there was ever a time when I said, ‘Why am I doing this.’ I felt very firmly that it was my responsibility as a citizen to serve,” he said.

The Apigian family has a history of military service. “My father served in World War II in the Atlantic. Pat’s father served in the Pacific. They both were away from home for more than two years. That’s really an exceptional commitment,” said Apigian. “When you think about Veterans Day, you have to think about your friends and classmates who served, who did really exceptional things.”

Apigian is also impressed with the number of veterans in The Valley. “I am astounded when I open The Valley Reporter and look at how many veterans there are in The Valley, because in truth, there aren’t that many in the general population.”

During his time in the military, Apigian sacrificed both time with family and the start of a real career. “On the other hand, I think my experience in the military made me a better person,” he said. “It made me a more committed, more punctual, more responsible person.”