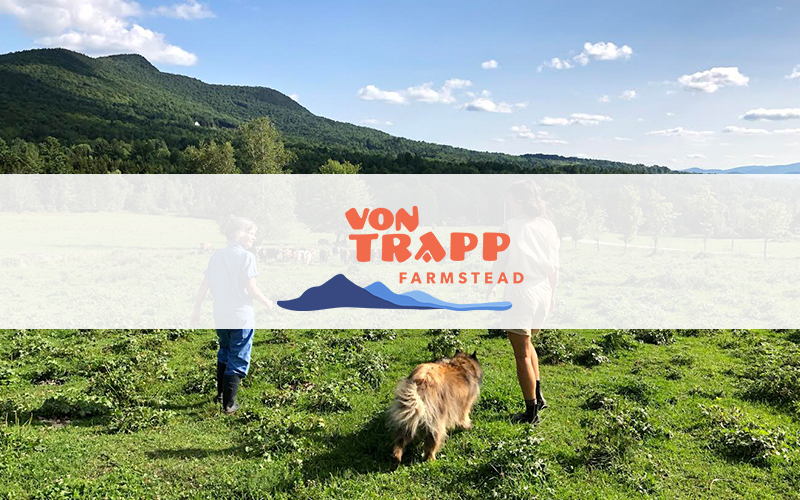 When the pandemic hit, the von Trapp Farmstead, a family-owned creamery in Waitsfield, Vermont, lost half of its sales overnight. Distributors from New York City to San Francisco stopped taking orders, leaving the creamery scrambling to manage an oversupply of milk while keeping their finances afloat.

To deal with excess milk, the von Trapps sold about six heifers and “dried off” about 10 milking cows, meaning they gradually ended the cows’ lactation cycles. As for finding new ways to turn milk into money, the von Trapps took a local approach to revive the business: they started a curbside pick-up service for Mad River Valley residents, and started selling milk to several Vermont-based yogurt businesses.

Just this week, however, the von Trapps made their biggest locally-oriented business change yet; they opened an on-site farm store. “The pandemic was the impetus for the farm store,” said Molly Semler, cheesemaker and partner of Sebastian von Trapp, who started the cheese business in 2009 on the family farm that his parents Kelly and Martin von Trapp have owned since 1979. “Our model had always been to sell to distributors. But we always wanted to sell more directly to our community,” she said.

Construction on the farm store started moments after the pandemic hit. The store is built into the northwest corner of the barn, which had been previously used to raise lambs, calves and chickens. Now, that corner contains a small shop, backed with processing space for cheese wrapping and cutting.

“Behind the farm store you’ll be able to see us cutting and wrapping,” said Semler. “It’ll be nice for people to see us at work in a way, while also picking up our cheeses and meats.”

The store offers much more than von Trapp cheese and meat, however. The space is chock full of local products, including local butter, eggs, maple syrup, honey, milk, yogurt, flowers, wine, beer and homemade soups. On Saturdays, the store will have some local baked goods, including Green Mountain baguettes.

“We’re also going to do a pizza kit with flatbreads, sauce and our shredded cheese and salami so you can take an easy-to-make meal home with you,” said Semler. “It’s like meat and cheese and all of its best friends with some everyday provisions.”

The purpose of the store, located on the north end of the Common Road in Waitsfield, is to provide a place where people can come with the family to pick up a few cheeses and some groceries as well, said Semler.

The store opened on Friday, November 6. From here on out, the von Trapp farm store will be open from noon to 6 p.m. Wednesday through Friday and from 10 a.m. to 6 p.m. on Saturdays. Saturday curbside pickup will still be an option for those who want to order ahead of time and pick up their goodie bag of meats and cheeses grab-and-go style.

“Curbside has been essential for us making it through this time,” said Semler. However, despite being stuck in a seemingly eternal pandemic, the von Trapps are already recovering from their spring market loss.

“There was a period of time where we had to send milk to other places,” said Semler. “Now all of our milk is going into our products again.”