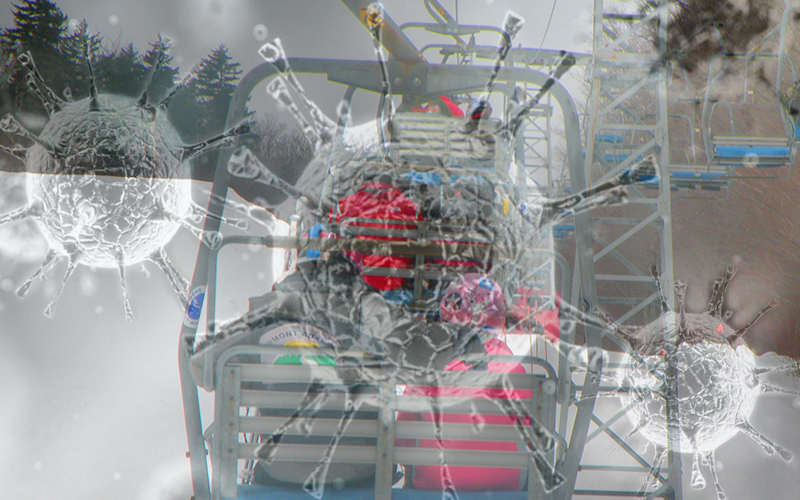 “I find clarity with what they did,” said Mad River Glen general manager Matt Lillard in response to the state of Vermont requiring everyone who comes to the state to quarantine for two weeks or quarantine for one week and get a negative COVID test.

“People outside of Vermont are hearing about their counties and the colors assigned by their states and thinking that their towns and counties were green by Vermont standards and that they could come here without quarantine. This provides clarity,” he added.

“Now they also need to define what quarantine means,” he said.

Last week Vermont announced guidelines for ski area operations this winter that include operating lifts at 50% capacity, reduced capacity in lodges, keeping track of where people sit in the lodges, keeping track of who is on the mountain on any given day for contact tracing and requiring that people coming to ski from out of state sign a statement attesting to the fact that they’re in compliance with the state’s travel guidelines.

Getting passholders to sign the letter of attestation is tricky for both Mad River Glen and Sugarbush. Lillard said that MRG would be contacting every shareholder via email to have them fill out the form. That email will allow people to have their pass mailed or they can pick it up in person. Either way, they’ll have to return the attestation form.

At Sugarbush, CEO John Hammond said that getting people to sign the forms before getting on the lifts is still a moving target.

“Our solution for Sugarbush products is to invalidate all of our local passes and require the attestation to then reactivate. When tickets go on sale we will require it as part of the transaction. We are still working on a good solution for the Ikon products as this is a product that is purchased outside of our database so Sugarbush / Stratton / Killington do not have a good way to communicate directly to the passholders that will be affected by the VT guidelines,” he said, noting that this work is in process.

The requirement that ski areas keep track of who is on the mountain every day is easier for larger resort with RFID scanning systems like Sugarbush has. For a smaller mountain like MRG where lift operators visually reviewed ski passes, it’s more difficult. Lillard said that MRG is purchasing a scanning system where passes will be scanned with a hand scanner to store skier data for potential contact tracing. That’s expensive he said and the resort applied for state funds earmarked to help ski areas comply with the guidelines this year.

“Unfortunately, hand scanning puts an employee within 6 feet of a every skier,” he said.

Both Sugarbush and Mad River Glen working on a reservation system for access to the lodges and food. Mad River Glen plans to build a bubble in the Basebox for an employee to access the flow of people. People will receive calls and texts telling them when they can come inside.

Hammond said that at Sugarbush, food will be ordered online with reservations for base and mid-mountain lodges. Both mountains will be operating at reduced capacity in terms of lodges and bathroom access.

Both mountains are asking that people boot in the car and leaving gear bags in the lodges won’t be allowed. Day ticket sales at both ski areas will be limited and by reservations and rental equipment needs to be booked online in advance.

Sugarbush has installed outside heaters and fire pits, plus a mobile food trailer (802 Burrito), an outside pick-up window and bar at the Gate House and six small cabins that can be rented as personal base lodges.