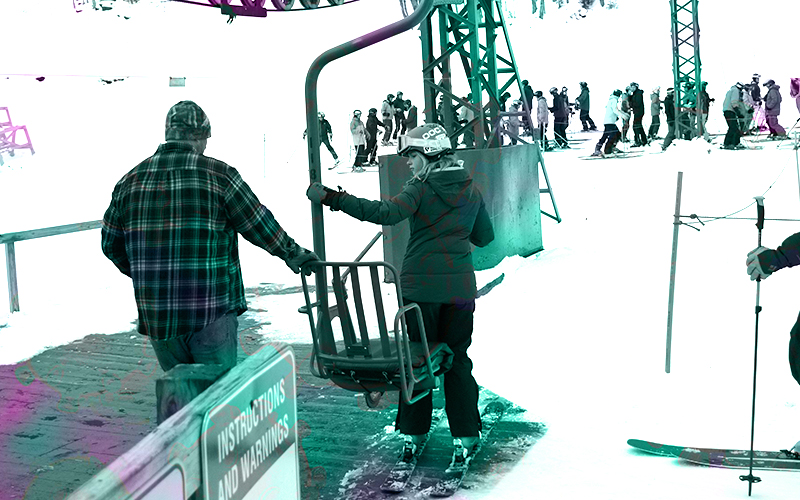 “The parking lot and your car is your base area this year,” said Sugarbush chief operating officer John Hammond at a community Zoom forum on Tuesday night. Over 100 people tuned into the forum, hosted by the Mad River Valley Chamber of Commerce, to hear Hammond, Matt Lillard, general manager of Mad River Glen, and Sean Kramer, 1824 House, speak about new COVID protocols at both ski areas.

Hammond’s assertion that “your car is your base area” has to do with Sugarbush’s limited lodge access this year. While lodges will operate at 50% capacity, the resort has been redesigned in a way that encourages people to boot up and eat outside.

“We’ve opened up additional outlets, like 802 Burritos, which is going to be in the old windows out of the Gate House,” said Hammond, who explained that Sugarbush doesn’t need its ticket windows this year, as all ticket purchases will happen via contactless payment online.

Sugarbush is accommodating outdoor eating by adding picnic tables and outdoor heaters in the courtyard, along with food trucks near the parking lot, where Hammond expects most people to get ready for the day. “We expect people to start at the parking lot, get booted up and get right on the lift,” said Hammond.

As for spacing out lift riders, Sugarbush plans to set up “ghost lanes,” to keep people laterally distanced, while also enforcing enforce a 6-foot spacing requirement between lift riders. “People at the lift-loading areas will be helping with that,” said Hammond.

Additionally, the resort will be considered a mask zone, where everyone is required to wear a mask unless they are actively seated and eating.

At Mad River Glen, skiers will be subject to the same spacing protocols and will also be encouraged to spend more time outdoors.

“Trying to figure out one-way traffic and capacity limits has been a massive jigsaw puzzle,” said Lillard, who announced that the Mad River Glen base lodge will stay open for people who want to boot up and leave their ski bags inside, with some caveats.

In other words, all food except pub food will be served grab-and-go style from the snack shack outside.

For those who want to go in the base lodge to change or use the bathroom, their time will be limited, and they will have to get used to new entrances and exits that encourage one-way traffic.

As for social distancing in the liftline, Lillard pointed out that Mad River Glen has a unique advantage with its Single Chair. However, people will still need to be spaced out in line, so lines will look long and zigzag all over the base area. “It will look like there’s a lot of people, but we are planning to open the season at 50% capacity,” said Lillard. “We are selling very few lift tickets.”

Lillard said that Mad River Glen might move up to 70% capacity if the coronavirus situation improves in the state. However, if things get worse, “we might go to a code red scenario,” said Lillard, which means only passholders would have access to the mountain.

Before skiers and riders can even think about getting on the lift, however, both ski areas are requiring that passholders and ticket holders fill out an attestation. “That is our way to inform people of what they need to do to come and enjoy our ski areas,” said Lillard. The attestation is a pledge in which people declare that they are aware of and will follow Vermont travel guidelines.

At Mad River Glen, most skiers are local. “So far the response has been really good. Seventy-nine percent of our passholders are Vermont residents or have moved to Vermont for the season,” said Lillard. Sugarbush on the other hand, does not know how many of its passholders are from Vermont versus elsewhere.

Both resort representatives gave a number of other pandemic-related ski resort operation updates. To start, neither resort is changing its uphill travel policy.

Moreover, neither resort has a plan to deal with people who lie about quarantining before skiing at the resort. “It’s on their honor,” said Lillard. “We’re asking them to comply and that’s the best we can do.”

Hammond pointed out that people are more honest than one might think, and that many have asked for refunds on their season passes knowing that they can’t comply with Vermont’s quarantine requirements.

Both resorts said they are taking a financial hit this year. “Right now, it’s not even about trying to break even. It’s about, how can we limit the losses,” said Lillard.

Regarding ski lessons, both resorts plan to follow the state’s recommendations. Hammond explained that just this week, the state tightened its guidance from allowing ski coaches to give lessons to “close cohort” groups to only family members of the same household. “We are adjusting our procedures,” said Hammond.

Finally, both resorts will open on-site ski shops at limited capacity. At Mad River Glen, the ski rental shop will be open by reservation only.