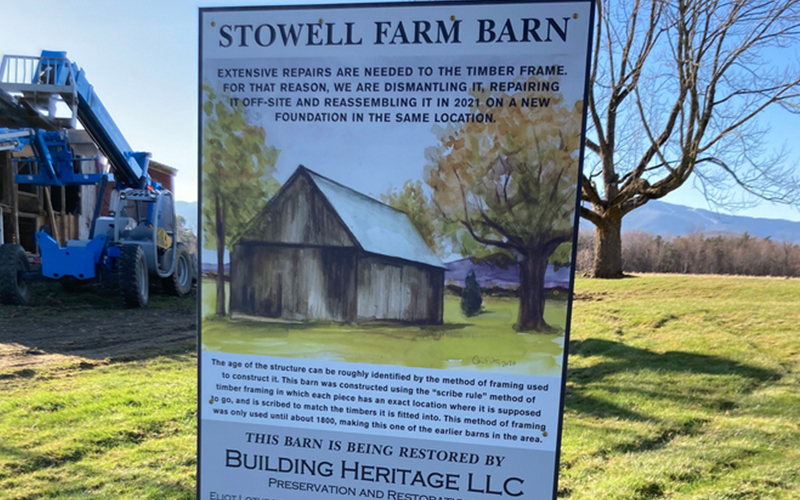 Those whose commute and follow East Warren Road might be wondering where that big old barn that was on the left, heading north, just before Common Road. Don’t worry, it will come back, piece-by-piece.

The property, formerly known as Stowell farm, is now owned by Jonathan and Larissa Ursprung. Even before they got married, the couple had talked about moving out of Cambridge, Massachusetts, and finding a quiet place to live and explore their passions.

“What we were looking for, I think, was a place where we were able to make more noise and have more space to move,” said Jonathan. Larissa is a dance choreographer and Jonathan is an attorney with a passion for making music. Jonathan, loving the architecture of 18th- and 19th- century buildings, fell in love with the red schoolhouse and late 18th-century barn. They bought it in July of 2019.

“The first problem we had was that the schoolhouse was in imminent danger of collapse,” explained Larissa. After getting mixed reactions about the state of the barn and schoolhouse from various friends, family members and even experts, the Ursprungs were introduced to Eliot Lothrop from Building Heritage, Huntington, whose area of expertise is in historical building preservation, specifically focusing on barns.

“I think the thing that really clicked with us and Eliot was that his face lit up the same way ours did when we went and looked at the buildings,” said Larissa. Lothrop was able to explain the unique features of the barn and was hired to restore it and the schoolhouse.

There were two ways the barn could have been restored. One way was to restore it in place. The second way was it take it apart, restore it in another location. Although it is meticulous, the second option made the most sense for their barn, for a multitude of reasons.

Each individual piece of the barn was labeled and then disassembled in late October of 2020, and then transported to Lothrop’s workshop. Taking the barn apart took about two weeks. Lothrop is currently working on it. In 2021, a new foundation will be made and the barn will be reassembled in its original spot. Lothrop made a sign saying the barn was not gone forever and is being restored.

Between talking to the historical society, locals and listening to Lothrop’s expertise, the Ursprungs learned the complicated past of the barn and schoolhouse. Around the 1930s, the schoolhouse had been moved from its original cellar and placed on a potato cellar. “One thing we learned about it was it used to be white when it was a school. We kind of like it red, so we’ll probably keep it red,” Jonathan said.

In the spring of 2019, there was a period of rain and then freezing and thawing which did not help the integrity of the schoolhouse. Now, the schoolhouse has been reinforced so it won’t collapse, and will be fully restored after the barn.

“The schoolhouse has had a number of different incarnations and a bunch of different purposes. So, figuring out what a historical preservation of this schoolhouse is going to look like is ultimately going to be a little bit more tricky,” said Larissa.

The Ursprungs found that there were originally more windows, but they had been taken out at some point. The front door is also not in its original location.