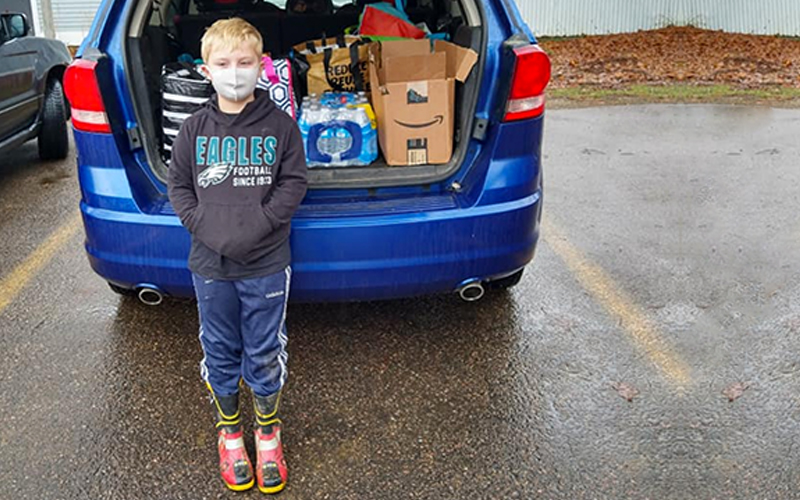 Landon Weide, Waitsfield, turned 7 on November 13. “I’m 7. I was 6, but then I turned 7,” Landon explained. “And for my birthday, I gave them some gifts and some stuff so they don’t freeze,” he said, speaking of his special birthday gift.

His birthday gift was not something he received, but rather, something he gave. With the help of his family, Landon collected donations for the Mad River Valley Community Pantry and also put together 20 bags full of food and warm clothing for the Berlin Police Department to distribute to the homeless.

Kayla Joslyn-Weide, Landon’s mom, told The Valley Reporter how her 7-year-old got this philanthropic idea.

The next day at dinner, Landon asked his parents if he could do something for the homeless and food insecure. “He said he wanted to make sure they had warm things to wear and food to eat,” said Kayla. “So, we put a video on Facebook and got donations from family and friends. My mother-in-law made 40 cotton masks,” she said.

Together the family put together gift bags full of masks, thermal blankets, food, water, toiletries, hats, mittens and other goodies. But not every bag was the same. “Some bags with girl colors have girly stuff and some with boy colors have boy stuff,” said Landon.

“I bought some stuff with my own money,” Landon added. “I got applesauce and water and some canned goods.” When asked why he wanted to do this project for his birthday, Landon said, “I felt sad for whoever doesn’t have things and stuff.”

On November 28, Landon and his family dropped off food and supplies at the community pantry. Two days prior, on November 26, they dropped off bags for the homeless at the Berlin Police Department.

According to an online post by Sergeant Chad Bassette of the Berlin Police Department, Landon made quite the impression. “I met a wonderful, thoughtful and caring young man and his younger brother today,” said Bassette. “I would like to thank Landon for being a role model for his younger brother. You both stepped up and kept the standard high here in Washington County, Vermont.”

Sergeant Bassette also noted how grateful bag recipients were. Not only was everyone happy about what they found inside the bags, but many were ecstatic about the bags themselves. “Not many people realize how valuable a zip lock bag is to unsheltered individuals. Thank you again, Landon. The Berlin PD is proud to have you and your family in our community,” said Bassette.

“We have a great generation of young children stepping up and making a difference,” he added. “I would like to thank all the parents for helping instill good values, compassion, empathy and ethics in their children.”

With all drop-offs complete, Landon will go back to doing his favorite holiday things: playing hockey, making Christmas cookies, eating his favorite food (ramen) and sledding. When asked how he felt after dropping off the gifts, Landon said, “Happy because I wanted them to have food.”

Landon is already excited to take on this giving project again for his next birthday. “I want to do it every year,” he said.