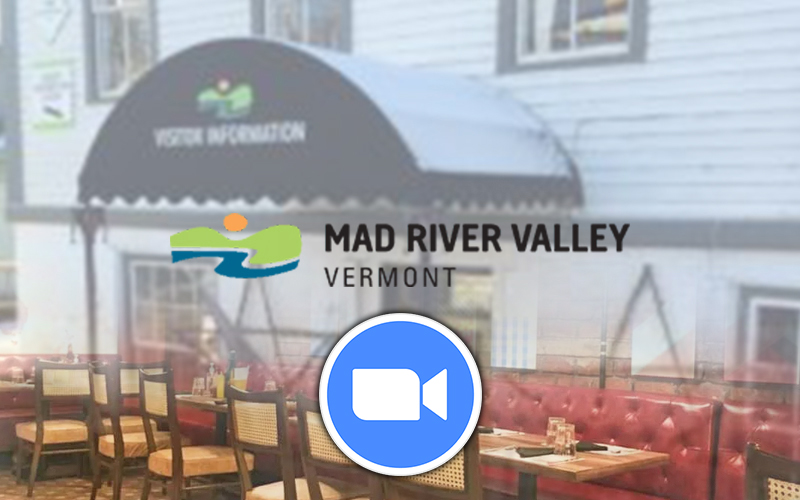 Hospitality business owners offered their thoughts on what they’ve learned, how they’re doing and the importance of community at a community Zoom forum this week.

The January 25 event was organized by the Mad River Valley Chamber of Commerce and attracted about 50 participants including Ana Dan and Paul Weber from the Hyde Away and Sage, Charlie Menard of Canteen Creemee, Jenna Rossbach of Waitstaff on Wheels, Kim Donahue, Jason Merrill of Worthy Burger and Ryan Chaffin of Farrell Distributing. It was moderated by chamber executive director Eric Friedman.

All related how the onset of the pandemic impacted their businesses and how it continues to do so. Chaffin offered a perspective that was new for many people. Farrell Distributing operates throughout the state distributing beer, wine and other beverages.

“We lost half our account base overnight, mid-ski season, right before St. Patrick’s Day. It usually takes us three to six months to get ready for that. One hundred thousand gallons of beer had to be destroyed by the end of March,” he said.

As businesses shifted to online platforms for ordering and takeout, there were learning curves for many, including Menard who said the move to all online ordering had been tricky.

At the Round Barn, inn owner Donahue explained that she and her husband flipped into action producing family meals for the community and the Mad River Valley Community Fund. For every four meals that were purchased, they donated a meal and began selling vouchers that could be given out to people for the family meals.

Chaffin was asked to compare The Valley to other regions of the state and reported that while the entire state was hard hit, there were higher losses in northern Vermont and in The Valley.

“Day traffic in southern Vermont is really strong. There’s a lot more of it happening and the second-home business is really strong. A lot have moved here and haven’t left. It’s hard to compare The Valley to the rest of the state. I think The Valley is feeling it a little harder than others to be honest,” he said.

Those who received PPP loans and other state and federal grants and loans uniformly said that that cash infusion made the difference in opening and being able to stay open. Merrill said that the pandemic made he and his partner pare down their operation, reducing hours to four days a week and reducing staff to a core group. That has allowed Worthy Burger to give staff raises and bonuses and has allowed he and his partner to be laser focused on every line item.

Donahue and others were heavily involved in lobbying state legislators for specific relief funding with money from the CARES act.

“The silver lining has been that we’ve turned competitors into colleagues. A community has developed that’s trying to collaborate and look out for each other. Waitstaff on Wheels is a good example of that collaboration,” she said.

She praised the local lobbying effort as well as the responsiveness of elected officials.

Chaffin agreed noting that elected officials and state employees did a great job from top to bottom.

Dan, Donahue, Merrill and Menard expressed gratitude for all the local folks who supported their businesses with takeout and later in-person dining as it was allowed.

We’ve been very grateful when talking to people about weddings in 2022 and 2023 and it’s been locals who’ve been suggesting us,” Donahue said.

“I heard this throughout the state, about locals coming out in droves to help each other’s businesses. Know that you’re in good company,” Chaffin said.

In terms of lessons learned, Menard placed a table in front of his ordering window to keep people physically distanced. He put T-shirts on it and ended up selling a lot of them. Dan put up a tent in the garden for outdoor dining and people liked it so much that might continue.

Merrill expanded outdoor dining at all three of his Worthy Burger restaurants and that’s going to continue as well.

Rossbach said it was too early to know what will happen next for the month-old business that is employing displaced and under-employed wait staff to deliver meals for local restaurants. She said she anticipated continuing through ski season.